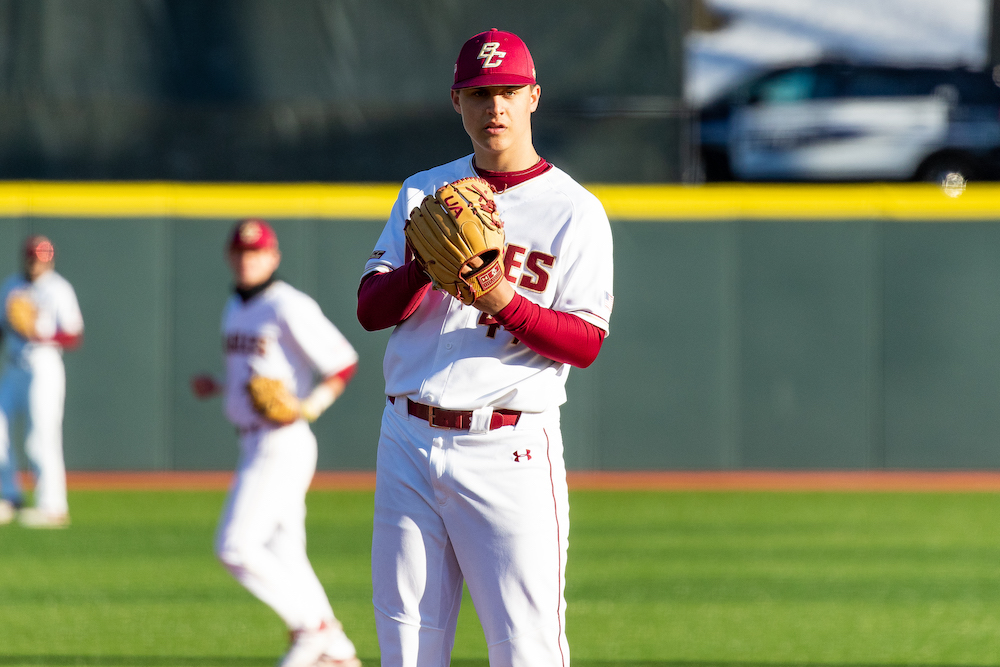 After a hot start to the season, Boston College baseball has faltered of late, losing six of its last eight games and only notching victories against Fairfield. The Eagles’ (5-9, 0-3) struggles continued as they entered their first ACC series of the year, dropping all three games to No. 23 Clemson (12-3, 3-0). BC showed an impressive ability to hang close to a talented Tigers team but was betrayed by an inability to hold onto leads late in games.

The Eagles closed out the series with their best performance of the weekend but were still unable to snatch a win as the Tigers stormed back to earn a walk-off victory. Both teams put up sizeable offensive displays, with BC connecting for 14 hits and Clemson getting 11.

Clemson jumped on Eagles starting pitcher Emmet Sheehan early, scoring three runs in the first two innings. The Eagles also had success in the opening frames of the game and put up a pair of runs on Tigers hurler Spencer Strider in both the second and third innings, knocking Strider out of the game.

BC put another two runs on the board in the fifth off an RBI line out from Luke Gold and a single from Ramon Jimenez that scored Joe Suozzi. Then, Clemson loaded the bases with no men out in its part of the frame, but Joey Walsh forced a double play and the Tigers only scored once.

The Eagles’ bats went quiet after the fifth, but Clemson continued to chip away at BC’s lead, scoring a run in each of the last three innings.

After BC failed to capitalize on a pair of base runners in the top of the ninth, Clemson first baseman Davis Sharpe walked to open the bottom of the inning. Sam Hall pinch ran for Sharpe and promptly stole second, advancing to third on a sac bunt from Chad Fairey. James Parker grounded out to short, but Hall beat the throw home, and the Tigers came away with a walk-off win and the series sweep.

The Tigers scored eight runs in the first four innings, and despite a huge fourth inning and an impressive performance from Eagles’ catcher Peter Burns, BC could never recover.

Eagles right hander Joe Mancini allowed 11 runs in just 4.2 innings, though only seven of the runs were earned—due in part to a costly outfield error by Gold.

Right fielder Elijah Henderson was a star for the Tigers, reaching base four times and collecting four RBIs.

BC seemed poised to come back into the game after it put up three runs in the fourth off a double from Jimenez and a triple from Burns. Despite the momentum, the Eagles failed to get much more going, only scoring a single run in the seventh.

Right-handed starter Mason Pelio turned in a solid six-inning outing for the Eagles, but BC couldn’t muster enough offense to support his start.

The Eagles opened the scoring in the first inning with a double from Cody Morissette to score Sal Frelick.

Despite pitching well for most of the game, Pelio became sloppy in the second, allowing a double to Dylan Brewer and bringing him home with a wild pitch.

Pelio regained his footing and sent the Tigers packing for the next three frames, knocking down the side in order in the third and fifth, and the Eagles took the lead again with a run in the third.

BC added another score in the sixth off a run by Jimenez, but Clemson tied it up in its part of the frame after piecing together a trio of singles.

The Eagles handed the Tigers another run in the eighth as Clemson shortstop James Parker went from first to third on a throwing error by Jack Cunningham. One batter later, Adam Hackenberg singled Parker home, and after BC went down 1-2-3 in the ninth, Clemson emerged with a come-from-behind victory.