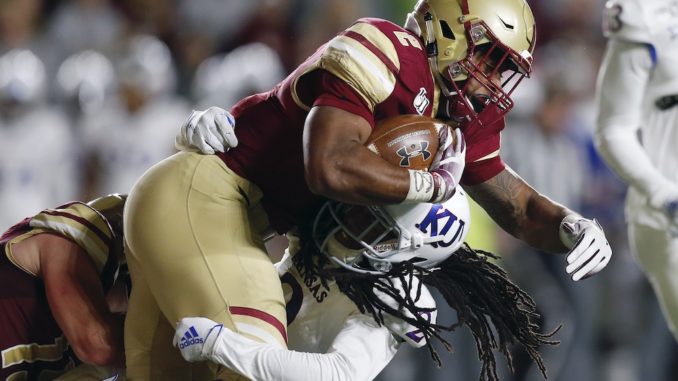 There are few days of the year where a phone call is more important than the day of the NFL Draft. College football players around the country sit patiently in their homes—all of them this year, as there will be no live audience—until they get a call ahead of NFL commissioner Roger Goodell announcing their names on the stage.

Last year for Boston College football, it was Chris Lindstrom, a guard for the Eagles, whose name was called by the Atlanta Falcons just 14th overall. Then came Zach Allen, 65th overall, Will Harris at No. 81, and Tommy Sweeny at No. 228.

This year, a new class of bright-eyed Eagles will await the call, including running back AJ Dillon and offensive lineman John Phillips. Statisticians around the NFL have already begun predicting where they will fall in the order. Most mock drafts have Dillon low in the order and Phillips undrafted, but anything can happen on Draft Day. Sure, BC’s not Alabama, which pumps out first-rounders like it’s a business—which college football is, but that’s for another article—but over the years BC has produced some serious talent that originally went under the radar.

Here’s my evaluation of a few potential landing spots for Dillon:

Kevin Hanson of Sports Illustrated: Dillon Taken by Tennessee Titans at No. 174

This year’s draft class is tacked with running back talent, including D’Andre Swift of Georgia, Cam Akers of Florida State, and Jonathan Taylor of Wisconsin. But even so, a No. 174 pick of Dillon surprises me. I’d expect him to go no later than the fourth round, but Hanson has him at the bottom of the fifth.

Regardless, if this were the case, Dillon would be joining Derrick Henry—the league’s leading rusher last year—in the backfield, a player to whom Dillon has been compared. Dillon is used to the power running into packed boxes that it takes to compete with someone like Henry, as former BC head coach Steve Addazio worked out of a run-first offense.

The two would be a lethal combination—having two of the league’s largest RBs has the potential to pound opponents’ defense to the ground. Both Dillon and Henry weighed in at 247 pounds in the combine, Dillon ran a 4.53 second 40 while Henry ran 4.54, and Dillon notched one more rep than Henry in the bench press with 23. Henry was drafted 45th overall—14th in the second round—and his early call was likely due to his high production rating.

The drawback here for Dillon, though, is that the Titans already have their big, powerful half back in Henry. Dillon would have to either compete for his spot—a tough feat seeing Henry’s production value last season—or he would come in as a full back and get fewer touches on the ball. As vital a role as full back is for blocking and creating plays, Dillon is used to being the stat guy for the Eagles, racking up touchdown after touchdown on the ground, and I’m not sure he’d be satisfied without stuffing the score sheet. NFL.com gave Dillon the prospect rating of “good backup who could become a starter,” though, which would be his ideal situation if he were to go to the Titans.

R.J. White of CBS Sports: Dillon Taken by Buffalo Bills at No. 128

In this scenario, Buffalo traded away its third- and fourth-round picks because its offseason moves left it without too many holes to fill. The acquisition of Stefon Diggs in the offseason will be huge for the Bills’ offense, but their running back corps could use some bolstering. Enter: AJ Dillon.

With Devin Singletary as the Bills’ main rusher, Dillon would provide some balance to their ground game. Singletary was a rookie out of Florida Atlantic last year—another under-the-radar program—and earned a similar prospect grade to Dillon from NFL.com. At 5-foot-7 and 203 pounds, Singletary is much smaller than Dillon and focuses his run game on finesse. Adding Dillon to the roster would provide some much-needed size and power to the Bills’ backfield, as he’s shown his ability to drive right through defenses for big gains.

It’s hard to find any drawbacks here for Dillon, as he’d likely get reps right away. He’s the kind of rusher that the AFC East isn’t used to seeing, as the ground game in that division is led by guys such as Sony Michel, Jordan Howard, and Le’Veon Bell, all of whom are at least 25 pounds smaller than Dillon.

Chad Reuter of NFL.com: Dillon Taken by LA Chargers at No. 112

Reuter’s is the highest projection for Dillon at No. 112. Dillon would be a huge get for the Chargers, as their depth chart currently only has two running backs: Austin Ekeler and Justin Jackson. This situation would give Dillon the chance to get lots of reps from the get-go, giving him the chance to prove his worth as a potential starter.

In a 2016 interview with Chargers.com, then-offensive coordinator Ken Whisenhunt said the team’s main focus in the upcoming season was going to be to improve the run game through sustained drives. Not much changed in his tenure, which ended in October of 2019, and the Chargers still lack a consistent running game.

The addition of a solid running corps would also better the quarterback’s chances by making play action more believable. And with the departure of Phillip Rivers to Indianapolis in the offseason, the Chargers will look for a rookie QB to take his place. It’ll undoubtedly take time for the quarterback to adjust—as it does with any quarterback in a new offense—and the dependability of Dillon’s run game would be a huge help to get things moving on offense in the meantime.

Overall, Dillon isn’t projected to hear his name called on the first or even the second day. But analysts have been wrong in the past—in fact, it’s nearly impossible to predict every single draft selection correctly. Wherever Dillon ends up, he’ll have to continue to prove himself as an offensive weapon to work his way up the depth chart. All he can do now is wait.