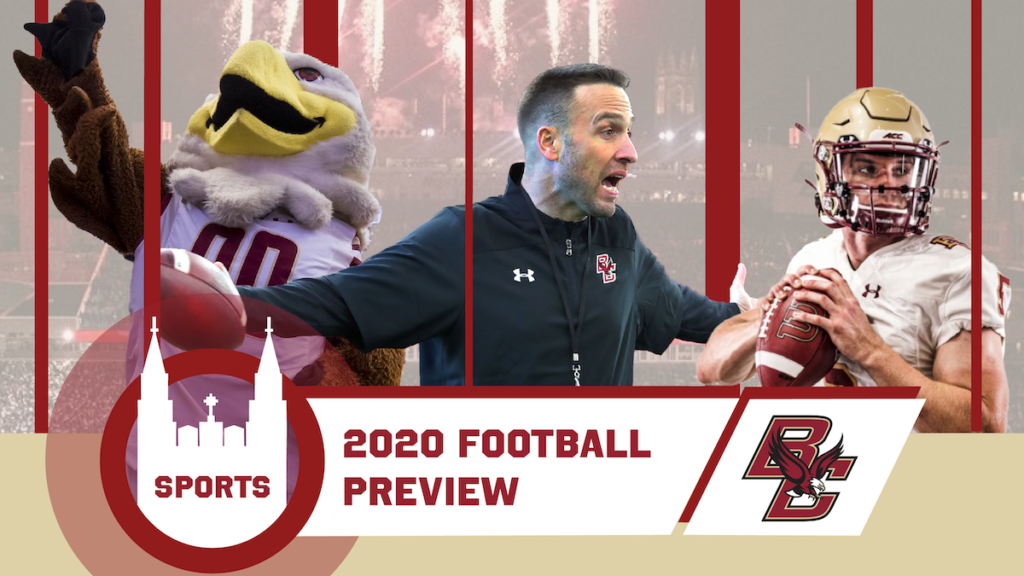 There’s no question about it: 2020 is the strangest year college football has ever seen. Two Power Five conferences have already postponed their seasons. Boston College football faces a pandemic, a shortened schedule, and on top of it all, a completely revamped coaching staff.

Last year, BC limped to a familiar 6-7 record, including a double-digit bowl game loss to Cincinnati. The Eagles then lost star running back AJ Dillon to the second round of the NFL Draft and three-and-a-half-year starting signal caller Anthony Brown to the transfer portal.

But despite all of 2020’s challenges, the Eagles are on the hunt to break a familiar pattern of seven-win-and-under seasons. First-year head coach Jeff Hafley—and his slate of new faces at nearly every coaching position—brings a versatile, defensive-minded approach to a formerly narrow-focused Eagles coaching staff.

Is a new coaching staff just what the doctor ordered? Or are the Eagles looking at another near-miss at bowl eligibility? We’ve got the answers to that and more in our 2020 Boston College football preview.

With so many unknowns surrounding the 2020 football season, one thing is for sure: Alumni Stadium will be a shell of its former self. There won’t be any yellow Superfan T-shirts in the stands, no tailgating in the Mod Lot. The BC faithful will just have to scream-sing “Mr. Brightside” from the comfort of their living rooms.

Game day will be an adjustment, for sure, but Hafley and his team have been making adjustments all summer long. The Eagles are familiar with an unfamiliar season already, and they’ve spent months preparing for what’s to come.

The Eagles first ventured into uncharted territory in March, when spring football—and all other activity on campus—came to a screeching halt. Players scattered around the country with limited access to workout equipment, and they suddenly had to get creative. Hafley held meetings virtually, but nothing has the same effect as convening together in the Fish Field House.

After BC football players arrived back on campus after a three-month hiatus, they spent the summer isolated from the outside world in a bubble-like environment. All football activities ramped back up on a much shorter timeline. Luckily for BC, its first matchup with Duke comes a week later than most of its ACC opponents, and Hafley said he plans to use all of that extra time to his advantage.

Familiar faces on both sides of the ball—including Isaiah McDuffie and David Bailey—will be key factors in the Eagles’ success this year. Read how Heights editors predict the season will go here.

Though BC’s coaching staff saw a complete turnaround in the offseason, its core of starters on the field remained relatively unchanged. The few personnel losses that BC did suffer, however, were huge.

First, three-year Eagles starting quarterback Anthony Brown entered his name in the transfer portal. The graduate signal caller eventually made his move to Oregon, leaving a vacancy in the Eagles’ backfield. Just one day after Brown announced his decision to transfer, BC’s all-time leading rusher AJ Dillon announced that he would forgo his senior season in favor of the NFL Draft, where he was later selected at No. 62 overall by the Green Bay Packers.

In the offseason, BC did its best to cut its losses with a both a major recruiting push and a lot of activity on the acquisition side of the transfer portal. Hafley, known around the football community as a recruiting hotshot, has done most of his recruiting with the high school class of 2021, but a late start hasn’t stopped him from bolstering this year’s incoming freshman class.

BC’s early signing period brought two four-star recruits from the class of 2020: local products Ozzy Trapolio and Kevin Pyne, both offensive linemen. Last year’s early signing day brought just nine new players onto the roster—compared to 16 in 2018—but such a trend was to be expected during a coaching shift. BC’s freshman class now includes 16 total recruits, 15 of whom are three-star athletes or above.

Hafley and his staff have also been very active in the transfer portal, picking up five more experienced players for the Eagles’ roster. Most notably, Phil Jurkovec, a quarterback transfer from Notre Dame, enrolled at BC in January and was granted eligibility over the summer. Other major acquisitions include defensive lineman Luc Bequette, wide receiver Jaelen Gill, and defensive lineman Chibueze Onwuka.

After a tumultuous few months in college football and three new editions of its 2020 schedule, BC finally has its games set in stone. The Eagles will play 11 games in total, all but one of which are against ACC opponents. The sole non-conference game comes in Week Two against Texas State, which showed it’s up to snuff in a narrow loss to SMU to open its season.