Home » BC Depth Chart: What the Defense Looks Like Against Duke
Sports, Football, 2020 Football Preview

BC Depth Chart: What the Defense Looks Like Against Duke

While Boston College football only lost two defensive starters to graduation—defensive tackle Tanner Karafa and strong safety Mehdi El Attrach—the Eagles’ defense will look drastically different than it did in 2019. Part of these changes come from new faces, as first-year head coach Jeff Hafley and his staff brought in three graduate transfers to the defense. The other factor is Hafley’s tinkering as he attempts to salvage a defense that produced at historically bad levels last season. The only unit that looks the same is the linebacking corps, as BC returns all three of its stars on the second level of the defense. The defensive line is completely overhauled, with two of last year’s starters benched and two grad transfers on the interior. The back four also features a grad transfer and, while many of the names from last year return, some will be playing in new spots. Here’s how the two-deep is looking on the defensive side of the ball. 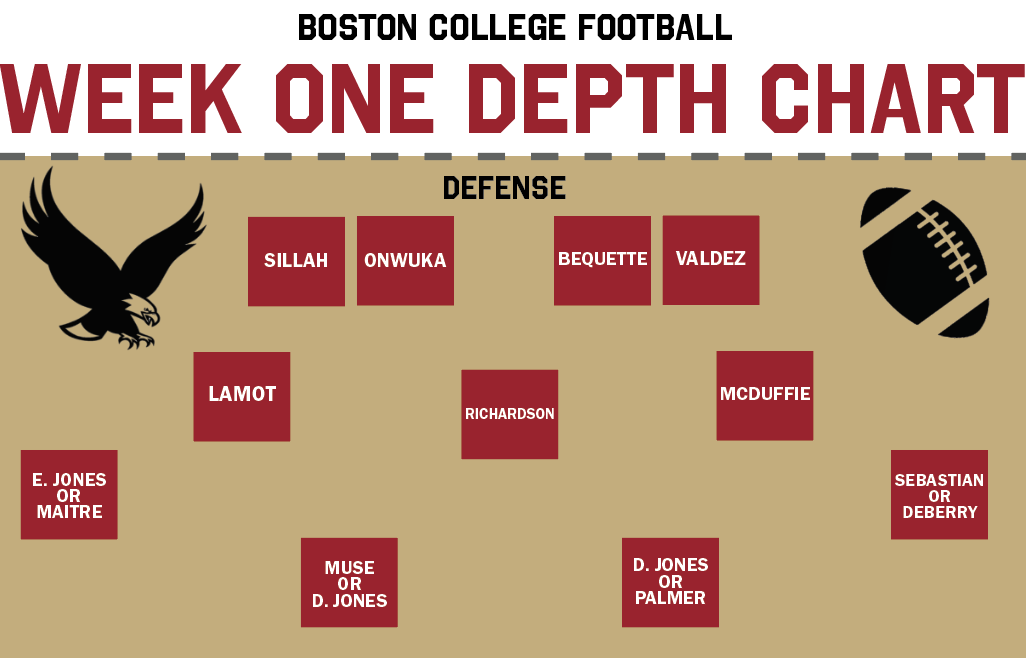 Brandon Barlow started 12 games for the Eagles last year and was reasonably productive, notching 35 tackles tackles, 6.5 tackles for loss, and 2.5 sacks. Still, the Eagles’ defensive line as a whole proved ineffective both at stopping the run and at getting after the quarterback. This year, Hafley decided to change things up, instead giving sophomore Shita Sillah the starting role. Sillah was relatively quiet in 2019, appearing in only nine games and making 11 tackles and a sack. After bulking up to 245 pounds this offseason from 235 last year, he’s better equipped to handle ACC offensive tackles. If beating out an entrenched starter and this spin move are any indication, Sillah could be a real threat off the edge this season. Barlow slides in as the backup.

Just like Barlow, TJ Rayam started 12 games for the Eagles and made his mark with 41 tackles and 6.5 tackles for loss. And just like Barlow, Rayam loses his starting job for the upcoming season as Hafley continues his overhaul of the defensive line. Buffalo graduate transfer Chibueze Onwuka instead earned the starting nod after he came to the Heights this offseason as a grad transfer. Onwuka was a star for the Bulls, earning All-MAC Third Team honors last season after racking up eight tackles for loss and 3.5 sacks. At 5-foot-11 and 285 pounds, he brings a quick, disruptive force to the middle of BC’s line. Either Rayam or redshirt sophomore Ryan Betro will serve as Onwuka’s backup.

With the departure of two-year starter Karafa, the Eagles had a massive hole on the interior of the line and little depth to fill it with. Luckily for BC, the PAC-12 postponed football this fall, leading Cal defensive tackle Luc Bequette to transfer. Hafley and his staff showed off their recruiting chops by landing Bequette’s commitment, and he is slated to start against Duke less than two weeks after coming to the Heights. With Onwuka next to him, the Eagles will have an entirely grad transfer-occupied defensive line interior. Bequette was a consistent performer for the Bears, starting 38 games across the last three years and totaling 126 tackles and 10 sacks in that time. True freshman Cam Horsley, a three-star recruit out of New Jersey, will serve as Bequette’s backup. Noticeably missing from the defensive tackle position is redshirt sophomore Kyiev Bennerman, who served as the backup defensive tackle last year and appeared in five games.

While Marcus Valdez only started one game for the Eagles last season, he continuously showed flashes of his explosiveness and finished the year with 7.5 tackles for loss and 2.5 sacks. The promise he showed has generated plenty of hype around him for the upcoming season, as Hafley lauded him for his performance in the offseason, and his teammates named him a captain. National media outlets have paid attention as well, as Pro Football Focus ranked him eighth among all returning Power 5 edge defenders as measured by pass rushing grade. Redshirt junior Bryce Morais, who saw snaps in all 13 games last season and made 16 tackles, will come off the edge when Valdez is on the sideline.

Despite all of BC’s struggles on defense last season, John Lamot was a bright spot in the linebacker corps. Always a force against the run throughout his three-year playing career on the Heights, Lamot returned to the form that made him the 2017 ACC Defensive Freshman of the Year by racking up 77 tackles. He returns to his starting role this season, shifting over to the strong side this year after spending much of last season playing middle linebacker. Joe Sparacio will slot in as Lamot’s backup. Sparacio started nine games in 2019 before losing playing time as Isiah McDuffie returned from injury.

If there was one position on the Eagles’ defense that we didn’t need the depth chart to guess, it was middle linebacker. The linebacker corps is shaping up to be the strength of the Eagles’ defense this season, and Max Richardon is the main reason why. With 108 tackles, 14.5 tackles for loss and 3.5 sacks, Richardson led the Eagles in nearly every defensive stat category and, after forgoing the NFL draft, he’s back to lead the defense for another season. Backing up Richardson will be Paul Theobald. The redshirt sophomore also backed up Richardson last season and made 17 tackles on the year.

Capping off the linebacker corps is Isiah McDuffie, who returns to the starting job that he filled for the last four games of 2019 after missing most of the year with a lower body injury. With Lamot as the dependable run stopper of the group and Richardson taking care of everything in the middle, McDuffie brings explosiveness of the edge and the ability to make plays in the backfield. Nick DeNucci, who primarily played on special teams last year, will serve as his backup. Curiously, Vinny DePalma, who had 33 tackles and five tackles for loss last season, fails to feature anywhere on the two-deep.

Hafley left Duke guessing with BC’s cornerbacks, choosing to list co-starters on both sides. Either Elijah Jones or Jason Maitre will line up for the Eagles at the left corner spot. Jones began his redshirt freshman season as a rotation corner but made his way into the starting lineup as the year progressed and started the last three games of the year. Maitre showed flashes in 2019, notching six pass defenses and a pick six against NC State, but was never able to consistently entrench himself in the starting lineup.

On the other side of the field, Brandon Sebastian and Josh DeBerry continue to battle for the starting job. Sebastian comes to the right after playing on the left for much of last year. While Sebastian started all 13 games last year, Hafley seems committed to not assuring the starting job easily, especially as the unit ranked 122nd nationally last year in passing yards allowed. DeBerry started two games last year as a true freshman. No matter who wins the starting jobs, all four of these players will get ample playing time as the Eagles rotate in third and fourth cornerbacks for nickel and dime packages. Redshirt sophomore Tate Haynes, who began 2019 as the starting right corner, will also see the field.

Hafley continues the grad transfer trend at safety, where Maryland transfer Deon Jones will start at either the free or strong position as he is listed as the co-starter in both places. Jones came to the Terps as a highly touted recruit but never quite lived up to his potential in College Park. Still, he brings a wealth of talent and experience to an Eagles unit that really struggled last season. Jones has clearly impressed in camp as Hafley gives him the chance to start over Mike Palmer, who started 11 games last year. If Jones gets the nod over Palmer, Jahmin Muse will slide in at strong safety.