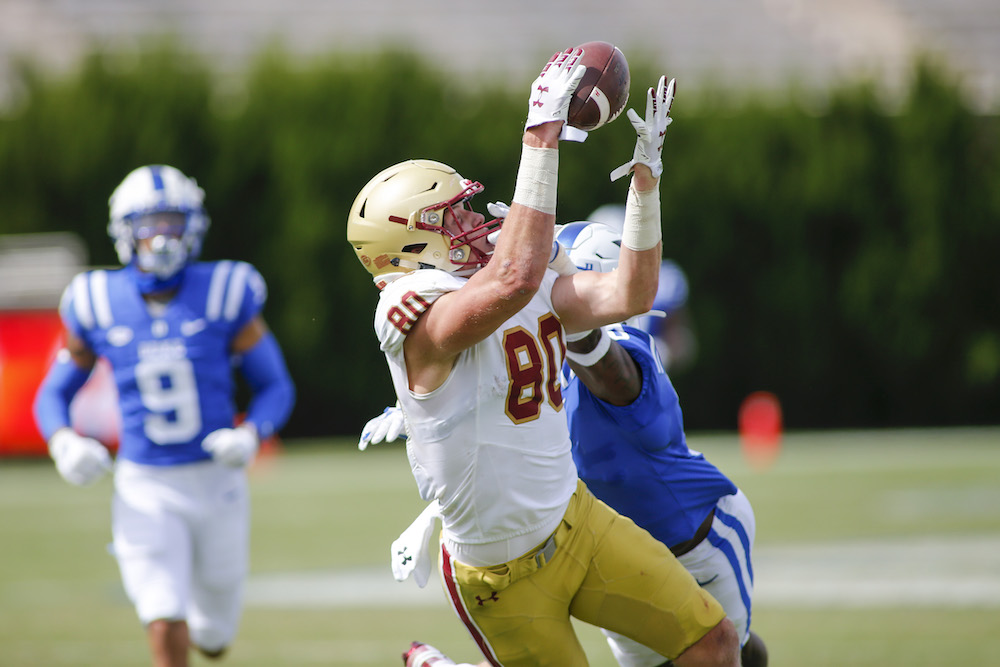 The game will be live streamed on the ESPN3, NESN+,  and the ESPN app.

This is the first time in Boston College football history that the Eagles will square off against Texas State. The Bobcats come into the game with a 1-2 record after dropping two close games to in-state rivals Southern Methodist and University of Texas San Antonio, while earning a victory over Louisiana-Monroe. The Eagles are hot off of a 26-6 win over Duke, dropping the Blue Devils to 0-2 thanks to a loss to then-No. 10 Notre Dame in the previous week. The Eagles open up as 18-point favorites in this weekend’s contest.

In his second year with the Bobcats, head coach Jake Spavital aims to bring their record back to .500. Jeff Hafley looks to remain undefeated with his second win as head coach and secure a victory in the Eagles’ only non-conference matchup of the year.

What to Expect from Texas State

Sophomore quarterback Brady McBride—originally named as the Bobcats’ starter—spent the last two weeks unavailable due to COVID-19 protocols, making way for junior Tyler Vitt. In only two games, Vitt has thrown for 602 yards, six touchdowns and two picks. With McBride returning to play and Vitt stepping up in his absence, Spavital told ESPN earlier in the week that he has made no decision regarding how the Bobcats will lineup at QB against the Eagles.

The Bobcats showcased the second-best pass defense in the Sun Belt last season—after Louisiana—but are without three top defensive players from 2019 and 13 of their top 20 tacklers. As a result, the team has allowed an average of 33 points per game through their first three contests this year.

Among the players to watch is linebacker Gavin Graham, who has racked up 22 solo tackles and a sack in the young season. Corners Jarron Morris and Khambrail Winters will also be key parts of the game, as they will be tasked with neutralizing BC’s receiving corps, including  Zay Flowers, who started the 2020 season with a career game at Duke.

In his postgame interview last week, Hafley expressed his pride in the team following their win in Durham, but he made it clear there is still work to be done. On Wednesday, Hafley described his game one play-calling as “vanilla,” saying that he hopes to spice up the playbook moving forward. Boston College looked like a completely different team than it did during the Addazio era, and knowing Jeff Hafley has more in his back pocket gives the Bobcats more reason to be nervous.