Home » Phil Jurkovec: The New Kid on the Block 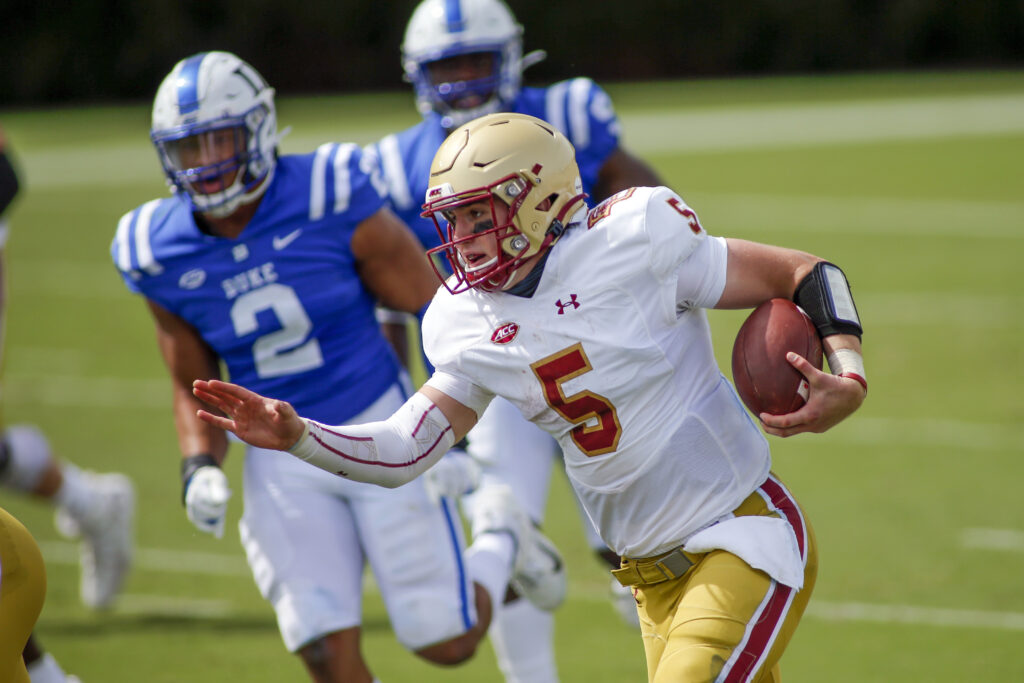 Phil Jurkovec: The New Kid on the Block

Redshirt sophomore quarterback Phil Jurkovec made his Boston College football debut in the Eagles’ 26-6 victory over Duke last Saturday, and even without starting a game since high school, he didn’t skip a beat.

Even the greatest of BC quarterbacks—Matt Ryan, Doug Flutie, Chase Rettig, and Glenn Foley—all lost in their first career starts, but Jurkovec set himself apart. He became the first signal caller since Matt Ryan in 2007 to throw for 300 yards, multiple touchdowns, and have a completion rate of 70 percent in a BC victory. Even though he was poised behind the line of scrimmage in the opener, Jurkovec faced plenty of adversity throughout 2020 leading up to his first win as an Eagle.

Jurkovec graduated from Pine-Richland High School in Gibsonia, Penn., in 2017, where he finished with 11,144 total yards, 71 touchdown passes, and a 68.4 percent completion rate.  His career yardage was the second-most in Western Pennsylvania Interscholastic Athletic League history. As a four-star recruit, Jurkovec received offers from several of the nation’s top football programs before ultimately signing with Notre Dame.

Jurkovec spent his first season at Notre Dame as the third-string quarterback, which prompted his decision to redshirt. In his second season, Jurkovec moved up the depth chart to the backup spot behind Notre Dame’s current quarterback Ian Book. In limited action playing second fiddle to Book, Jurkovec completed 12 of his 18 passes for two touchdowns.

Once Book opted to remain at Notre Dame for a fifth year this year, Jurkovec entered the transfer portal, and he eventually decided on BC in early January. In his first media appearance on the Heights, Jurkovec said that the new BC coaching staff’s faith in him was the deciding factor in his decision to join the Eagles.

“The two criteria I was looking at when making a choice as to where to go were really about the coaches,” Jurkovec said. “[I looked for] the coaches that were going to believe in me and develop me, because I think I have a lot of room to grow. And that’s what I found with Coach Hafley and Coach Cignetti.”

The similarities between Notre Dame and BC, he said, further reassured him that he had made the right decision.

“I do see comparisons in the schools—the number of students, the type of students, and the football—so the transition has been easier because of that,” Jurkovec said.

When he first announced his transfer, Eagles fans crossed their fingers that the NCAA would shortly grant Jurkovec eligibility to play in the 2020 season. The process drew on, and he was forced to wait most of the summer, even after the NCAA approved later transfers, including fellow new Eagle Jaelen Gill. Over the summer, the #FreeJurk hashtag began to circulate on Twitter, as BC fans and players looked to encourage the NCAA to grant Jurkovec’s waiver.

Seven months after his transfer, the NCAA granted his waiver on Aug. 4, only days before the first full-team practices took place.

“I was frustrated with the process,” Jurkovec said in the press conference immediately after he gained eligibility. “I was expecting an answer weeks or months before, so there was a little bit of frustration. I was glad that there were people on my side that wanted to see the NCAA come out with a decision. In the end, they ruled for me, and I’m grateful for that.”

Along with his looming eligibility status, COVID-19 threw another wrench into Jurkovec’s plans when it eliminated spring ball and impacted the summer workout plan for the entire team. Stuck at home, the team couldn’t run live drills until it arrived at training camp in early August. For the two months prior to the start of training camp, a typical player workout consisted of lifting, conditioning, and little to no contact, according to head coach Jeff Hafley.

“Everything he went through was really tough for him,” Hafley said about Jurkovec after the NCAA granted his eligibility. “We really did not have a spring ball. He has not had a lot of experience in the scheme. Really, training camp is when he got going into a routine.”

“It feels great because we’re now finally getting into real football with full pads,” Jurkovec said in a press conference at the start of training camp. “We’re simulating different scenarios in the game. We’re really getting into realistic scenarios, and that’s a lot different than what we’ve been doing in the past throwing with receivers and walkthroughs. We’re going full contact and live. It’s been as realistic as it can get.”

Throughout training camp, Jurkovec established chemistry with his teammates both on and off the field, he said in a press conference earlier this week. Even though full-contact training may have started later than normal, Jurkovec worked closely with offensive coordinator Frank Cignetti throughout the summer to get a firm grip on the new playbook. Jurkovec got more reps this summer than he had in a long time, possibly since high school, which made football “a lot more fun” for him.

“All my teammates have treated me so well since I’ve gotten here,” he said. “The coaches, the AD—Dr. Kraft—and really everybody that has worked to get this going, we’ve sacrificed a lot and we really play for each other, so I love it.”

When he released the initial depth chart for BC’s matchup with Duke, Hafley chose to keep the starting signal caller a secret. Jurkovec had been battling it out all summer with Dennis Grosel, who started BC’s final seven games last season. It wasn’t until the morning of the game that Jurkovec finally got the nod.

After transferring across the country, waiting to gain eligibility, and pushing through unordinary spring and summer workouts, Jurkovec had finally been rewarded with his first college start.

“I haven’t been out there playing real football in so long, so just getting out there taking hits and playing again was so much fun,” he said at Tuesday’s Press conference. “It was a lot different than practice, the live rush, knowing that you can take a shot. Them coming after you definitely heightens everything, and the adrenaline rush gets going, so it’s a lot different.”

Hafley said at the press conference that he is proud of his quarterback’s debut performance, but he believes there is plenty of improvement to come from both Jurkovec and the rest of the team.

“For us to really get in sync and to get better is still going to take time,” Hafley said. “Whether it’s Phil playing quarterback or it’s our offense, there’s just not a ton of reps together. If you watched the tape closely, Phil would tell you there’s room for improvement. He made some nice plays, but just like everybody else, if we’re going to continue to win games, he’s got to play better too.” 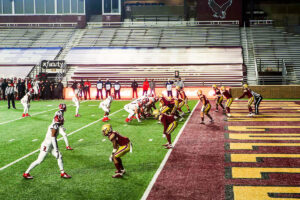