The game will be broadcast nationally on ABC.

As the first ranked team to play in Alumni Stadium this season, No. 12 UNC matches up against Boston College football for just the eighth time in program history. In the all-time record book, UNC boasts a 5-2 record—including a 4-0 record in the ACC—against the Eagles. The teams meet this Saturday for the first time since 2013, when UNC took down BC 34-10. It’s been a long 15 years since BC’s last victory over the Tar Heels, which came in a 37-24 win in the 2004 Continental Tire Bowl in Charlotte, N.C.

While BC’s all-time record against ranked contenders isn’t exceptional—BC sits at a mere 31-112-1 all time against teams ranked in the AP Top 25—the Eagles have momentum on their side. Energized from a 26-6 blowout win over Duke and a 24-21 comeback against Texas State last week, BC will look to continue its hot streak. UNC similarly comes off a 31-6 victory against Syracuse on Sept. 12 but has sat idle for the last two weeks. With BC (2-0, 1-0 Atlantic Coast) and UNC (1-0, 1-0) both off to undefeated starts, the matchup should act as a test to determine whose record will remain untarnished. 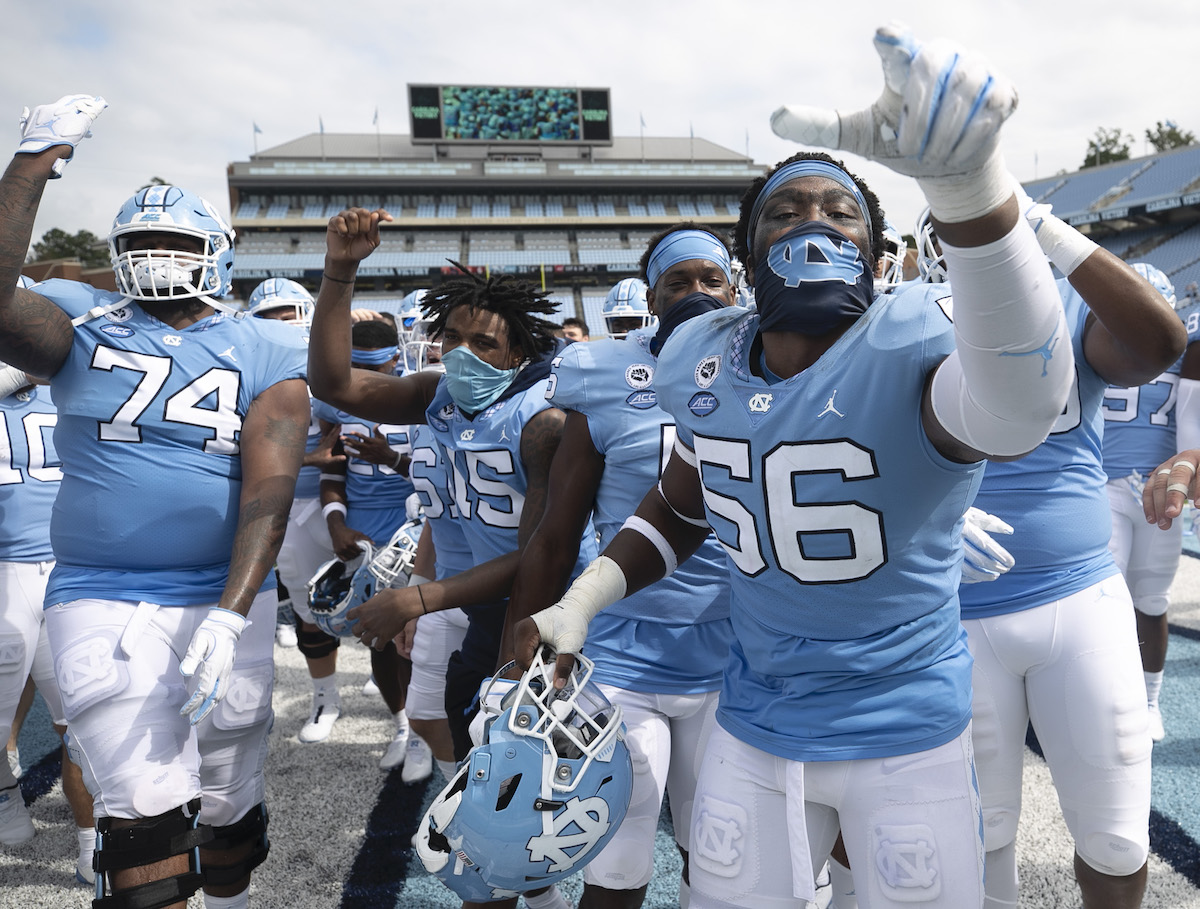 What to Expect from UNC:

Despite coming off an opening win, UNC’s largest obstacle on Saturday likely won’t be the Eagles themselves, but the fact that they haven’t played in two weeks. Due to COVID-19 regulations causing the cancellation of the Tar Heels’ match against Charlotte, followed by a scheduled bye week, UNC has been unopposed since early September. Expectations for their return, including those of head coach Mack Brown, are unclear.

“We’re starting over,” Brown said in a recent press conference. “We’ve got to completely start over.”

Even so, UNC has fire power in the backfield, led by quarterback sensation Sam Howell. In 2019, Howell’s first year at UNC, the young QB broke the all-time record for seasonal passing touchdowns with 38. In the Tar Heels’ opening win over Syracuse, Howell completed 25 of his 34 passes for 295 yards and two interceptions, and he looks to get back on track against BC.

Howell isn’t the Heels’ only offensive weapon, though. In the victory against Syracuse, UNC’s Javonte Williams rushed for three fourth-quarter touchdowns. Other prominent offensive pieces include all-purpose player Michael Carter and wide receiver Dazz Newsome, who were both named to the 2020 Preseason All-ACC team. If BC has any chance of stopping the Tar Heels’ torching offense, the Eagles will have to slow UNC’s offensive momentum early on.

It didn’t take too much for UNC to contain Syracuse’s running game in UNC’s season opener, as the Orange generated limited yardage aside from QB Tommy DeVito’s frantic scrambles. Flashes of light blue constantly blurred DeVito’s vision, as UNC delivered a monstrous seven sacks, and the quarterback completed only 13 of 31 passes for 112 yards. The Tar Heels’ massive defensive line averages just under 300 pounds, which creates a stifling pass and rush defense.

Through one game, UNC currently ranks third in the nation in total defense, allowing only 202 yards, a mark ahead of powerhouse schools Clemson, Georgia Tech, and Oklahoma. The Tar Heels’ defense will be a true test for BC quarterback Phil Jurkovec, who has completed 70.5 percent of his passes through two starts.

It remains to be seen how UNC will bounce back after a few inactive weeks. With ample time to prepare for a match against a conference rival, the Tar Heels could well unravel Jeff Hafley’s game plan, backed by Brown’s veteran presence and experience. Thus, UNC remains the heavy favorite by a wide 13.5 point spread.

Featured Image by Robert Willett Courtesy of The News and Observer