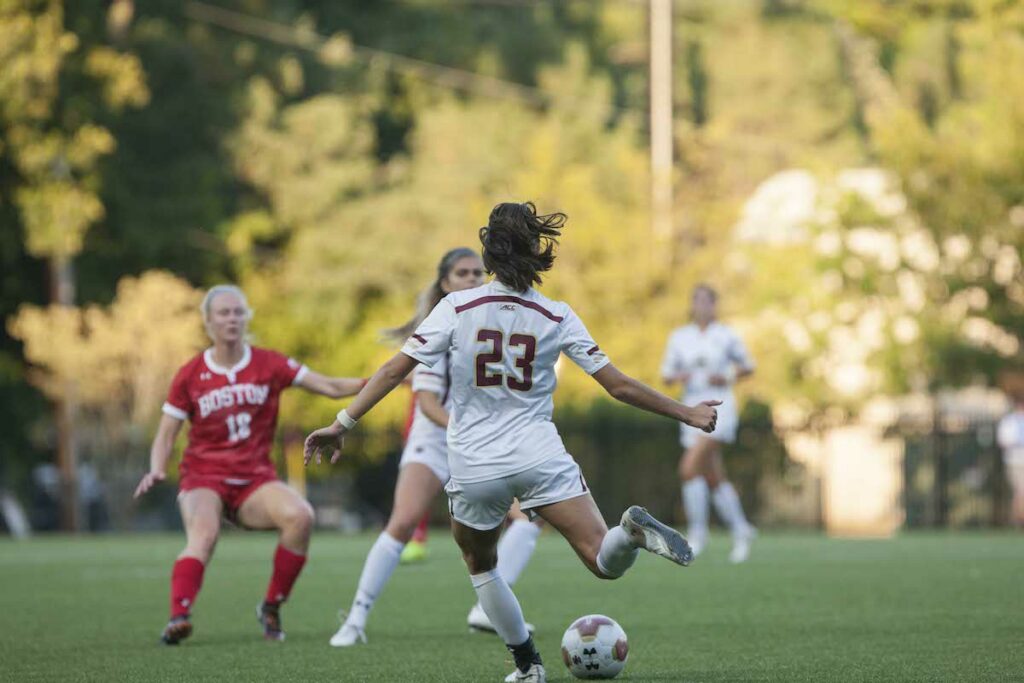 Irish Play Lockdown Defense, Shut Out BC 2-0 in Season Opener

Boston College women’s soccer players didn’t even know if they would get to see the field this season—their male counterparts don’t have that luxury—but on Thursday, they got back on a soccer pitch to open an abridged, COVID-19-impacted season.

But the Eagles (0-1, 0-1 Atlantic Coast) struggled to find a rhythm on the attack in their season opener, falling on the road to Notre Dame (2-1, 2-1) by a final score of 2-0. The Irish entered the match hot off a 6-0 win against Miami in the second game of their season, and they looked like they’d been playing together for longer than the Eagles—because they had.

BC opened its competition season two weeks after the Fighting Irish, who already had two games under their belts entering Thursday’s matchup. Notre Dame had more time to shake out the nerves, and a 5-0 loss to Florida State followed by the win over Miami seemed to help the Irish settle in.

The Irish overwhelmed the Eagles in the first half, drawing first blood with a goal just 14 minutes in.

BC had its first big chance of the night in the 24th minute but didn’t equalize as Michela Agresti couldn’t connect on a cross right in front of the net, and Notre Dame recovered the ball.

The Irish then extended their lead to two in the 35th minute, as Eva Hurm fired a cross to Kiki Van Zanten, who finished it off behind Eagles’ goaltender Allie Augur. It was Hurm’s second assist of the night, as she also gave the go-ahead in Sammi Fisher’s opening goal for Notre Dame.

The score could’ve looked much more lopsided if not for some brilliant play by Augur, who made six saves in the first half alone. Notre Dame frustrated BC on both ends of the pitch, taking 14 shots in the first half while holding the Eagles to just one. The lone BC shot came in the 42nd minute from Alison Heckman.

The Eagles’ defense held up better for the second half, but the offense never got on the board despite a few close chances. In the 50th minute, Notre Dame goaltender Mattie Interian made a diving save on a shot from Jenna Bike. Bike also saw Interian deflect her shot off the post in the 59th minute.

She dives to her right and deflects BC's shot off the post and away!!

BC finished the match with only five shots compared to Notre Dame’s 19, but Augur made a career-high eight saves in the match to keep the playing field pretty even throughout the contest.

The Eagles will look to break a five-game losing streak—extending back to last season—as they move into the rest of a shortened season.