Tempers Flare in Physical, Down-to-the-Wire Battle With No. 12 UNC

With under a minute to go in the game, Josh DeBerry headed toward Boston College football’s sideline visibly upset, and he slammed his helmet on the ground. It appeared that he thought BC had recovered the onside kick, giving the Eagles a chance to beat their first AP-Top 25 team since taking down Southern California in 2014.

But the referees determined that North Carolina’s Elijah Green had jumped on the ball, so DeBerry and his teammates were understandably rattled. Down the stretch, BC (2-1, 1-1 Atlantic Coast) had a chance to topple AP No. 12 UNC (2-0, 2-0 Atlantic Coast), but a few missteps near the end handed BC its first loss of the year, 26-22.

With 45 seconds on the clock, BC’s final drive resulted in a fade to the hands of CJ Lewis in the front corner of the end zone. Down by two, BC had no choice but to try for the tie. As Phil Jurkovec dropped back to pass, UNC’s Trey Morrison found his way in front of the ball, and he returned it 100 yards for a two-point gain.

Then came the onside kick that gave DeBerry such frustration.

Though the game ended up four points in UNC’s favor, the Eagles showed remarkable resolve against a ranked team. UNC had a Heisman contender for a quarterback, a nationally heralded defensive line, and two weeks of rest on their side entering Saturday’s contest. Even so, BC put up the best fight the Tar Heels have seen so far this year.

“It doesn’t matter where we play, who it’s in front of,” head coach Jeff Hafley said in his postgame interview. “Whoever lines up against us, we’re going to go as hard as we can, and we’re not going to back down.”

UNC drew first blood midway through the first quarter as quarterback Sam Howell threw a dart to Khafre Brown from 24 yards out. From there, the Eagles played catch-up the entire game, but they struggled to find their way into the end zone.

Aaron Boumerhi, the star of last week’s win over Texas State, notched three field goals for BC. His first kick—a 35 yarder just minutes after Brown’s touchdown—kept BC competitive near the end of the first quarter. 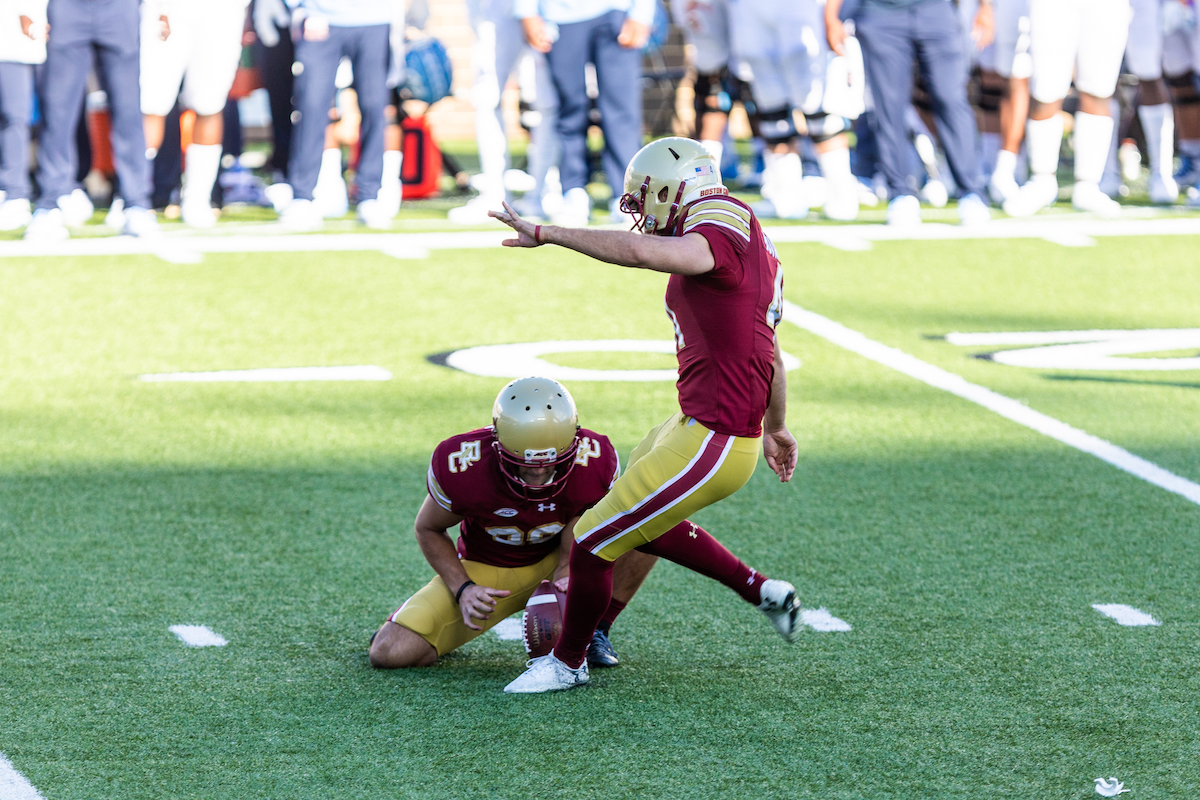 But as the first frame drew to a close, UNC expanded its lead. The Tar Heels drove 58 yards on six plays to take a 14-3 lead just before halftime.

BC’s defense struggled to get stops on third down for the entire game. UNC converted on seven of its 12 third downs, largely thanks to quarterback scrambles from Howell. Two third down conversions in the middle of the first quarter—including one on third-and-18—set up Brown’s 24-yard touchdown reception to open the scoring. Howell also rushed for a 20-yard gain on third-and-8 to set up UNC’s second touchdown of the night later in the quarter.

From start to finish, BC played physically. Hafley said that going into the game, his goal was to play aggressively, and that was the case for both teams. Midway through the first quarter, Hunter Long took a hit as he reeled in a catch, and UNC’s sideline erupted in cheers. Hafley vocalized his frustration to the referees, but he said after the game that the Tar Heels’ reaction just made the Eagles fight harder.

“The one thing I promise my team is that I’ll have their back no matter what,” Hafley said about his frustration with UNC’s reaction.

“We take that personally,” Brandon Barlow said after the game. “If one of our guys goes down, and the other team is cheering, that’s just fuel to the fire. … We see stuff like that, and we stick up together as a team.”

The second quarter told a very different scoring story, as the Eagles outscored UNC 13-7. Boumerhi hit his second field goal of the night, and the kickoff bounced as UNC’s returner called for a fair catch. Confusion among the referees meant UNC began its drive at its own four-yard line.

On the Tar Heels’ second play of that drive, Jahmin Muse hit Howell’s hand as he threw, allowing Brandon Sebastian to go up for the interception. The corner—a position for which an interception is rare—returned the ball for five yards, and BC had first-and-goal at the five-yard line.

David Bailey added another touchdown to his resume, but this time, it came in the form of his first career receiving score. Bailey now has at least one rushing, one passing, and one receiving touchdown in his career.

UNC scored seven more points before the half on a 41-yard reception for Javonte Williams. On the scoring play, officials deliberated over whether or not Howell was past the line of scrimmage when he threw, but eventually the call stood. What they missed, however, was an illegal receiver downfield as one Tar Heel lineman nearly negated the score.

For the second straight week, Jurkovec showed off his accuracy when BC needed it most. Down 21-13 with one minute on the clock, the Eagles took over on their own 25-yard line. BC charged down the field on the heels of Jurkovec’s six completions, including five straight to put BC on the 13-yard line. That drive set up Boumerhi to end the half with a 30-yard field goal and send BC to the locker room down by less than one score.

To open the second half, UNC came out swinging. The Tar Heels looked as though they were in scoring position before Max Roberts strip sacked Howell for a 14-yard loss, and UNC had to punt from BC’s 49-yard line. UNC came away from the third quarter with just three points, and the Tar Heels held BC’s offense to none.

But BC gave UNC plenty of opportunities to score more in the third quarter. In three straight plays, BC’s defense was flagged for 15-yard penalties: Isaiah McDuffie for pass interference, then McDuffie again for unsportsmanlike conduct, and finally Roberts for unnecessary roughness.

The final quarter saw BC fight for every opportunity, but ultimately, the goal-line interception on the two-point conversion sealed BC’s first loss of the year. Even with a tick in the L column, BC players still have plenty of optimism.

“There’s never any doubt,” Long said after the game. “Until the clock hits zero, we’re not going to doubt ourselves. I love all of these guys, and I have faith in every single one of them.”

“We can play with anybody in this conference,” Jurkovec said. “I’m very excited for our future. I love the way that we fought. We will never stop fighting.”