Home » After Weeks of Complaints, Parents Grill BC Dining About Poor Service and Food Quality 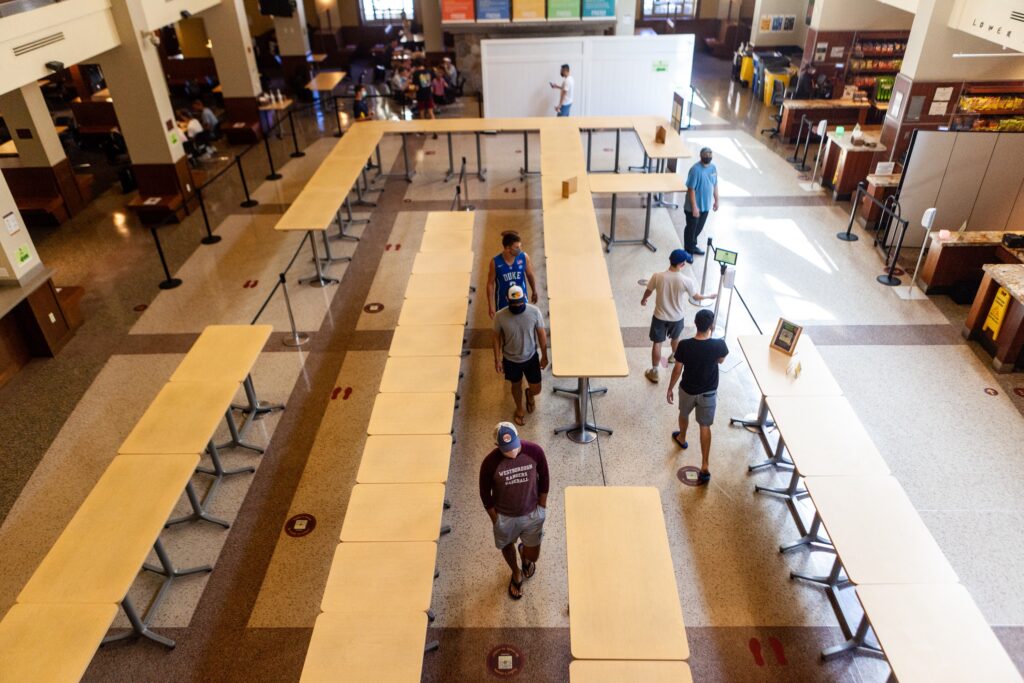 After Weeks of Complaints, Parents Grill BC Dining About Poor Service and Food Quality

After weeks of complaints about both the quality and price of the food in Boston College’s dining halls, Dining Services held a Zoom meeting on Wednesday night with a group of parents to address their concerns. Parents expressed their concerns with the nutritional value, costs, and portion sizes of the food served on campus, as well as the lines, limited hours of operation, and the safety precautions for COVID-19.

“I think a lot of us have kids at other well-to-do colleges, and it’s not the same experience,” said Tania Whitton, a parent on the Zoom call. “So maybe it would be worth reaching out to some of the other schools to see what they’re doing. I don’t know.”

During the event, BC Dining announced that it will be reopening late-night dining after Columbus Day weekend. BC Dining administrators also said during that meeting that they would like to make the GET Mobile app accessible on weekends, but they don’t have enough staff.

Beth Emery, director of BC Dining, told parents that BC Dining is a self-operated service that pays labor and benefit costs, rent, and utilities. BC Dining consistently posts financial losses, Emery said, adding that this year has been more difficult than ever.

“Not a single year has been as challenging as the past six months with the pandemic,” she said.

The notion that Dining Services fails to make a profit caught some parents by surprise, as many lamented what they saw as overpriced food.

“I don’t think we’re looking for you guys to miraculously change to a different type of thing tomorrow,” Rich Cutler, a parent, said. “We’re just looking for the quality of the food to be better at more reasonable prices.”

In response to complaints about the limited hours of operation, Frank Bailey, associate director of food and beverage, explained that BC Dining needs to shut down the dining halls between meals for an hour in order to deep clean work and dining stations. Even in normal times, though the hours of operation are restricted.

Michelle Lucier, BC’s dietician, recommended that students use the dining halls like a grocery store.

Students, Lucier said, should purchase several “grab-and-go” meals to avoid long lines and ensure that they have food to eat if they can’t make it to the dining halls when they are open.

One parent, Maureen Menton, asked Dining Services to change the model, arguing that BC Dining’s pay-as-you-go model with limited hours isn’t meeting students’ needs. If BC Dining doesn’t make sufficient changes, Menton said, she and other parents would continue fighting with the administration.

Megan O’Neill, associate director of restaurant operations, responded to Menton by saying that Dining staff hate the current model, arguing that the problem this year is COVID-19.

“Well it’s not COVID, I’m just saying that the model in general,” Menton started to respond before Emery cut her off. “I just invite you to revisit it and I hope that this effects some change,” Menton eventually continued after regaining control of the conversation.

One parent said that the biggest problem is low-quality food.

“I really don’t feel like we would have a problem with the program if the food quality was just better,” said Lan Rosser, another parent. “I mean, my daughter has had several meals where she said the chicken is raw, it’s visibly pink. … She’s not a picky person, and so for her to basically say, ‘It’s just not good. It’s just not good, I don’t wanna go there to eat.”

“Well we appreciate everyone’s feedback and we hope you all have a good night and hope we get to visit again,” Emery responded, ending the call as the hour came to an end.