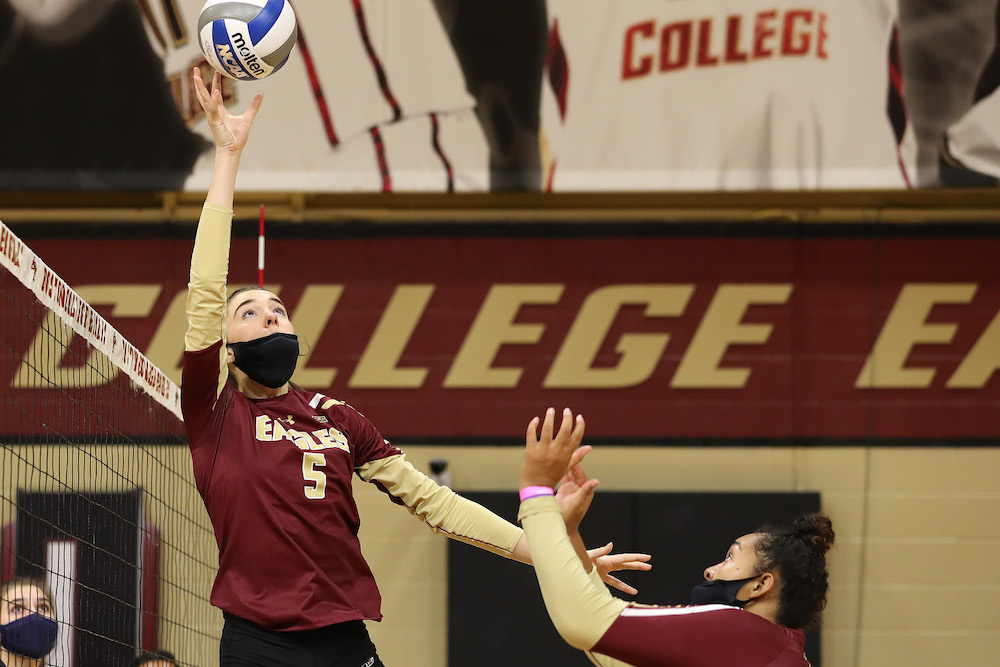 Boston College volleyball has seen many perfect sets this season. Unfortunately, none of those sets have been in the Eagles’ favor. In its last game before the potential spring season, BC faced off against No. 5 Notre Dame (6-1) in Chestnut Hill. Just the night prior, the Irish had decisively beaten the Eagles (0-8) in straight sets, handing the unranked BC team its seventh straight loss. And while the young Eagles had put up a fight early in the match—a characteristic unlike many other games this season — they ultimately fell 1-3 to the more experienced and determined Fighting Irish.

For the majority of the first set, it was unclear who would come out victorious. The two teams exchanged points throughout the set, neither going on runs longer than a couple of points. While the teams appeared closely matched, once the Eagles lost their initial lead, the Irish took over and kept it just out of reach. Irish freshman Aubrey Hamilton, who led Notre Dame with 20 kills on the night, tallied four kills in the opening set to keep Notre Dame above the Eagles.

The largest lead of the set came at 12-7 for the Irish, forcing a timeout call from BC head coach Jason Kennedy to get the Eagles back on track. The pause worked, for the most part, as senior Clare Naughton tallied a kill off the break and successive kills from Amaka Chukwujekwu and Silvia Ianeselli brought the Eagles within three of the Irish. But while BC kept up point-for-point with their opponent, the Irish rallied, going on a 7-1 run to close out the first set, 25-19.

Once again, the Fighting Irish took an early lead in the second set, going up 6-5 over the Eagles before a service error by Kiara Schmidt gave BC an easy point and tied up the set. The Eagles took advantage of this misstep as a kill from Ianeselli and an ace from freshman Sophia Lambros put BC up 9-7, giving the Eagles their first lead of the set. The two teams continued exchanging points for the majority of the match, neither team securing more than a two-point lead before the tides turned on it.

The second set consisted of much longer rallies than the first, showing the Eagles’ resilience to not go down easily against their final opponent. And while the long rallies marked a stronger performance from BC, it was three straight aces from Lambros that gave the Eagles a 19-17 lead over Notre Dame, forcing a timeout from Notre Dame head coach Mike Johnson.

The break was enough to get the Irish tied back up with BC, but the Eagles kept regaining the lead. After being tied late in the first set, three quick kills from libero Anna Murphy, Naughton, and Chukwujekwu pushed the Eagles up 25-22 over the Irish. And just like that, the Eagles secured their first set win since the team’s 1-3 loss against then-No. 11 Pitt in early October.

The adrenaline from the set win didn’t last long, however, as the Irish were quick to bring the heat in the third set. The Eagles and Irish exchanged a couple of points to start the set, including two big kills from Chukwujekwu to help tie it up at 3-3. Another solo block by Chukwujekwu and an ace from Ianeselli put BC up to an early lead, but that’s when the Irish took it up a notch.

The Hamilton-led Irish went on numerous long runs in the third set to distance themselves from the Eagles. Irish junior setter Zoe Nunez stepped up to the plate, assisting on 10 of Notre Dame’s kills in the third set as Hamilton and Charley Niego tallied five and four kills, respectively. After being down 5-3 to BC early in the set, the Irish tallied a 22-6 run, showing off their clear dominance to close out a nearly perfect set, 25-11.

The fourth set of the match ended no better than the previous one, with Notre Dame negating an early Eagles lead to take one of its own. BC quickly went up 6-3 over the Irish due to a combination of well-placed kills by Chukwujekwu and Ianeselli and an ace by freshman Grace Penn—the Eagles’ eighth ace on the night.

But as had happened in the set prior, things began to fall apart for the Eagles. Unforced return errors from both Chukwujekwu and Ianselli tied up the game, prompting a timeout call from Kennedy to get BC back on track. The break seemed to hurt the Eagles more than help as the Irish continued to distance themselves from BC once the two teams returned to play. Naughton tallied two kills of her own against the Irish, but hers were the only points in the Eagles’ favor as Notre Dame went up 11-8 before Kennedy called his second timeout of the set.

The two teams continued to exchange points with one difference from the first and second sets—the Eagles could only buy a single point at a time while the Irish went on short runs to increase their lead. Hamilton continued to lead Notre Dame, tallying four kills on the set to reach a total of 20 on the night. It was Niego, however, who was the star of this set, scoring four kills of her own in addition to two aces against the Eagles.

BC staved off the first set point at 24-15 with a well-placed kill from Naughton, but Hamilton quickly ended any hope of a comeback with a kill of her own. The Eagles were unable to reconjure the magic of the second set, falling to the Irish for the second straight night, 25-16.