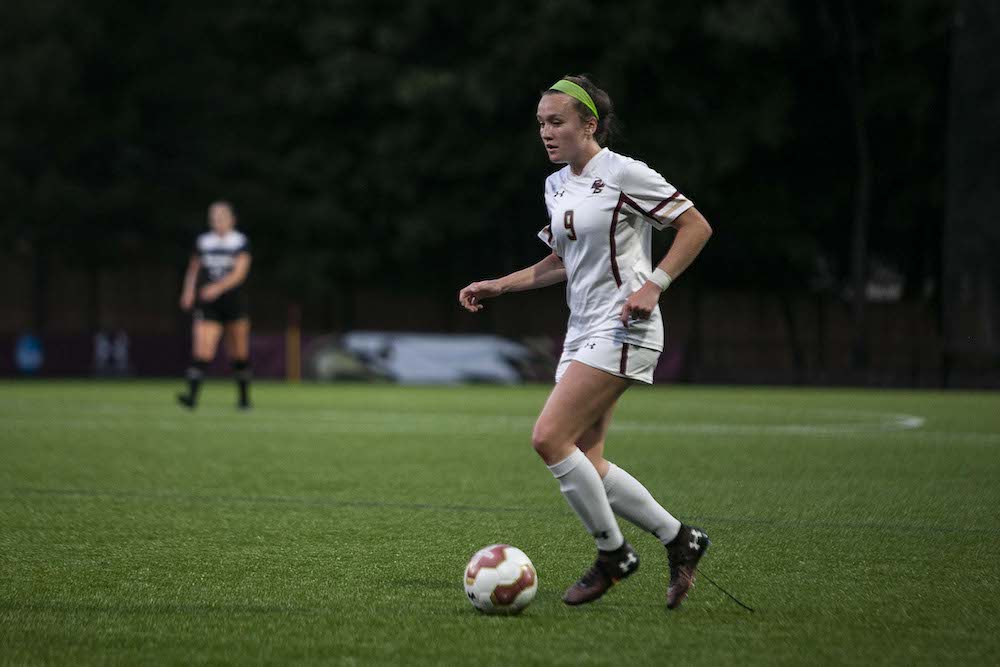 Despite Boston College women’s soccer’s struggles this season, the Eagles have shown an impressive ability to hold their own against top-ranked opponents. Duke needed overtime to scrape away a win against the Eagles, and BC held North Carolina scoreless for the entire first half earlier this month.

It was more of the same story for the Eagles (1-6) on Thursday night, as BC went toe to toe with No. 10 Virginia for nearly the entire game. The Eagles’ intensity level dipped for only a few minutes in the second half, but that was all the time the Cavaliers (6-2-1) needed, scoring a pair of goals in just four minutes to down the Eagles 2-1.

Emily Knous netted a beautiful volley in the 82nd minute, but it was too little too late for the Eagles.

Neither team mustered much offense in the opening minutes of the game, as both sides struggled to adjust to difficult weather conditions. Driving rain pelted the field for the entire game as it had for much of the day in Newton, leaving the field waterlogged and making ball control a tall task.

Virginia seemed to especially struggle with the conditions. Several of the Cavaliers’ passes in the opening minutes went out of bounds, and their attackers struggled to make moves on the dribble. The playing surface may also have contributed to their woes, as Virginia had not played on a turf field since its last away contest against BC back in 2017.

The Cavaliers’ offensive attack improved throughout the first half, tactfully utilizing the difficult conditions by playing long balls from the back and taking advantage of mishits as the Eagles defenders struggled to play the fast ball.

BC goaltender Allie Augur played spectacularly in the first half, punching away a strong header from a corner in the 23rd minute and then going to ground to save another shot just moments later.

Forward Rebecca Jarrett was the Cavaliers’ top offensive threat in the first half, repeatedly beating Eagle defenders and getting into the box. The slippery field, combined with Michela Agresti’s strong play as the last line of defense, prevented Jarrett from ever getting any shots off in the first period.

Knous nearly opened the second half with a screamer of a goal, unleashing a volley off a Virginia clearance from a corner, but her shot went just wide right.

Instead, it was the Cavaliers that got on the board first. The Eagles won a corner in the 64th minute, but Virginia easily cleared it to the feet of Alexa Spaanstra. Spaanstra sprinted all the way from the edge of the box past the midline, easily outpacing the Eagles’ defenders, and slid a pass across the field to Jarrett. Jarrett took the ball nearly all the way to the endline and, just as it looked as though she was out of room, slotted the ball past Augur.

Virginia scored another just four minutes later. Augur was able to save a shot from Diana Ordoñez off a corner, but the ricochet fell right to Claire Constant who smashed it into the top of the net.

The Eagles began to put more pressure on the Cavaliers in the final stages of the game and were rewarded with Knous’ goal in the 82nd minute. The goal was almost an exact replica of the play that had culminated in Knous’ shot missing just right in the first half.

Virginia cleared the Eagles’ corner and the ball came right to Knous at the top of the box, who unleashed a powerful volley on frame. Her strike found the net this time however, slotting the shot into the bottom left corner.

The Eagles won a freekick in the 89th minute at the top of the box, but Jenna Bike’s tying attempt sailed far over the goal, sealing victory for the Cavaliers, who just had to run down the final seconds of the clock.