Prior to arriving at Boston College, I had taken Spanish classes for eight years of my life. It was my favorite subject, and I was driven to be good at it precisely because of how much I enjoyed it. That all changed once I took a Spanish class here my freshman year.

Most of the reasons that I grew disenamored with the study of the language were because of my professor’s employment status. The instructor was an adjunct, and because of that, he was desperately limited in his ability to tailor the class to his own teaching style.

A cookie-cutter syllabus, designed by a department administrator who never once interacted with us, determined what we learned in the classroom and how. The vibrant excitement of a living language was soon reduced to stale, vacuous textbook exercises. I haven’t taken a Spanish class since.

This type of situation is unfortunately quite common at BC and at universities across the United States. If you’ve been to college at any point in the last century, chances are that you’ve been taught by an adjunct faculty member even if you didn’t know it.

An adjunct professor undergoes the same grueling process of researching, writing, and teaching to attain their doctoral degree as any other professor. But unlike “regular” tenure-track faculty, adjuncts are not offered a contract to teach for long periods of time, instead getting paid on a semester-by-semester basis. And if that lack of job security wasn’t enough, adjuncts earn a miniscule fraction of their tenure-track colleagues’ pay. In short, they are “professors in the gig economy,” as the title of a recent collection of essays on the topic puts it.

The reasons to scrutinize the University’s dependence on adjuncts are many. There are pragmatic reasons: For those considering graduate school, it’s imperative to understand the job situations that the majority of Ph.D.s have to contend with. But much more broadly, if BC were to seek to understand how it got stuck in the mire of contingent faculty—and how it can remove itself going forward—it would necessarily be required to do some Ignatian soul-searching to better discern its raison d’être. That would only stand to benefit our academic community.

In his book The Adjunct Underclass, author Herb Childress, who himself was once an adjunct, posits that one of the key reasons that colleges across the country are swirling with rootless adjuncts is because higher-ed institutions don’t have any idea what their main reason for existence is. Is it to prepare students for careers? To form them into decent human beings? To run top-tier athletics programs? To expand their real estate presence? In trying to answer all of these questions and more, funding for teaching is often the first to go, according to an anonymous administrator quoted in Childress’ book.

BC epitomizes such an existential crisis. In the last few years alone, the University has constructed a superfluously expensive field house (ringing in at $52.6 million) for the football team, bought out a small liberal arts college, and childishly squabbled with the City of Newton over its supposed right to decimate Webster Woods.

In the process, the University has more than ever lost sight of its mission: to educate its students and, as a corollary, to provide instructors with dignified opportunities to share their knowledge with the next generation of learners.

Instead, those at the top of the BC pyramid have found it more palatable to balance the books by hiring cheap labor to carry out that most unsavory task of higher education: teaching. (The numbers vary year to year, but for the last few years, a little more than half of all instructors have been adjuncts.)

To quantify the issue of adjunctification, I made my way to the labyrinthine realm of the Boston College Fact Book—a deceptively pretty document that in reality is the Siren-like offspring of a polished Adobe InDesign file and a jumbled Excel spreadsheet that has something to hide. To my dismay, however, I discovered that the Fact Book contains almost no information about adjuncts, and what little there is can only be interpreted by going through a gauntlet of multiplying and dividing. Luckily, Billy Soo, the vice provost for Faculties, amiably helped me sift through these numbers and fill in the gaps.

The results of BC’s aimlessness are striking, evidenced most easily by pay discrepancies. According to Soo, tenure-track faculty are slated to make, at minimum, around $114,600 this academic year, while the highest-ranking tenured professors will earn nearly $190,900, not even including fringe benefits.

In contrast, adjunct faculty members will make at most around $7,500 per course, according to Soo—and that’s only if an instructor has taught more than 20 courses previously at BC. Adjunct professors must also teach 20 courses over the course of five years before they’re eligible for health insurance, by the way.

I began the investigation into these numbers two years ago when I was a reporter, not a columnist, for The Heights. The benefit of sharing this information in the form of a column rather than a news article is that I can say, without penalty: These numbers are insane. They are insulting. They are exploitative.

Some may object to my criticisms, citing that it is nothing more than the free market doing its job. The problem with this assertion is that it assumes universities are businesses just like any other, whose goal is to maximize economic efficiency. This notion is patently misguided. The aim of a university should be to educate students, full stop—revenues be damned.

Ninety-four percent of adjuncts are teaching one or two classes this term, according to Soo. But it’s not as though adjunct professors necessarily have stable careers and are merely supplementing their incomes by teaching a class or two on the side. Many of my own professors have had to depart right after class so they had enough time to commute to another teaching job around Boston.

To combat such a mammoth problem, there are two main action steps to be taken, neither of them pleasant but both of them necessary.

First, BC needs to critically examine its budget. If the University is running such a tight ship that nearly 50 percent of faculty members in the Morrissey College of Arts and Sciences are on short-term contracts, then it’s time to reappraise just how necessary a new integrated science institute is, or indeed how much—sigh—neurotically trimmed grass and pristine landscaping meaningfully contributes to the college experience. The money from these vanity projects would be better spent on giving existing faculty a better reward for their dedicated work.

Secondly, the University needs to lead the way among colleges across the country by dramatically cutting back on the number of Ph.D.s it bestows. From a scholarly perspective, this is unequivocally a lamentable proposal. But only by capping the number of spots in its doctoral programs can BC begin to help stem the torrent of Ph.D.s flooding out into an academic environment that is unable to sufficiently appreciate their intellects.

In all of this discussion, it’s important to highlight that BC is far from being an outlier in its extreme over-reliance on external part-time faculty. But BC is relatively unique in its self-promotion as a Jesuit, Catholic institution of higher learning. Our university has set for itself a higher standard than other colleges: to act ethically and in accord with Catholic social teaching, even when everybody else is swimming in the opposite direction.

The reality, though, is that for many years BC has failed its adjunct faculty members. In its obsession with conforming to other leading universities, it has forgotten exactly those qualities that are supposed to make it stand out from the rest. 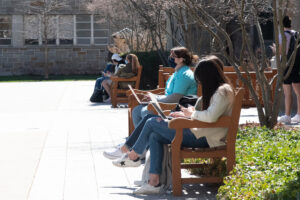