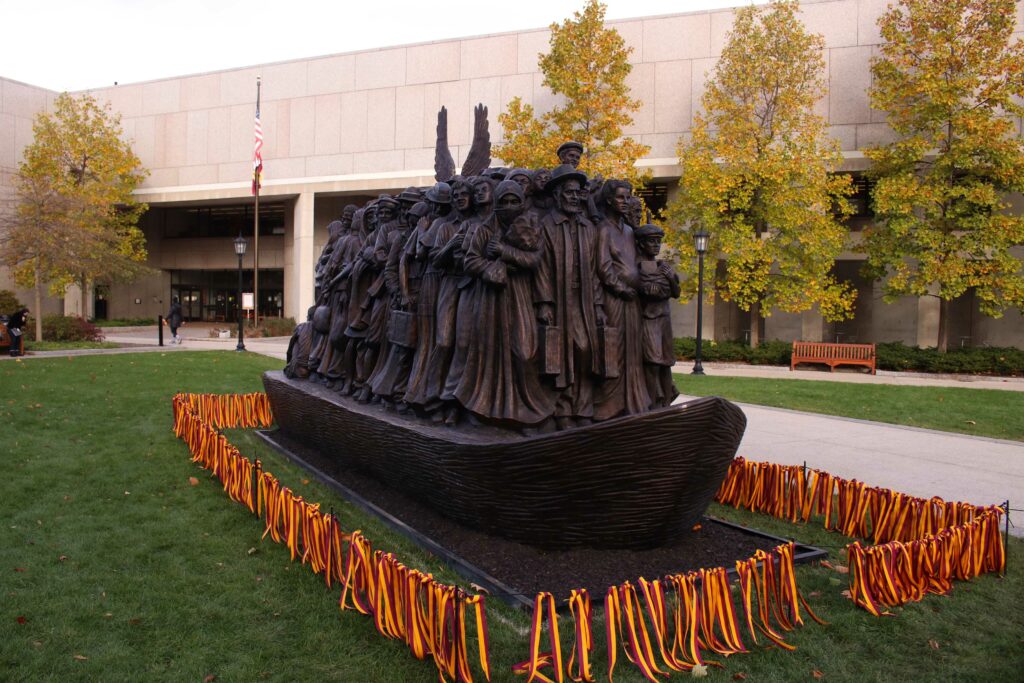 Angels Unawares, a new art installation displayed on the O’Neill Plaza as of last week, depicts immigrants crowded onto a boat—emitting a message of acceptance and hope to students and staff at Boston College.

The sculpture is a replica of the one installed in Rome at St. Peter’s Square on Sept. 29, 2019—the 105th World Day of Migrants and Refugees. Pope Francis, who has demonstrated his commitment to the issue of immigration in the past, supported the piece. He hoped this piece would be a testimony to the Catholic Church’s commitment to welcoming immigrants and refugees with open arms.

Canadian artist Timothy Schmalz made a replica of the 3.8-ton, 20-foot long sculpture, which is making its way across the country before settling in its permanent home at the Catholic University of America in Washington, D.C. BC will house this piece of art for the entire month of November.

Schmalz has been creating large scale sculptures for the last few decades. His work almost always has a spiritual theme. His statue, Homeless Jesus, depicting a body wrapped in a blanket reclined on a metal bench, gained him global recognition. He spreads the Christian doctrine of love through his religious sculpture by representing the plight of the most vulnerable.

Angels Unawares is a depiction of migration throughout all of history. It is inspired by a passage from Hebrew 13:2: “Do not neglect to show hospitality to strangers, for thereby some have entertained angels unawares.”

The statue depicts 140 men, women, and children from all cultural and ethnic backgrounds standing shoulder to shoulder on a boat, according to the statue’s description on BC’s website. Some of the figures depicted include a Jew fleeing Nazi Germany, an Irish man leaving the potato famine, a Polish woman fleeing communism, a Cherokee walking the Trail of Tears, a Muslim escaping civil war in Syria, and Jesus, Mary, and Joseph fleeing to Egypt. Mother Cabrini, the patron saint of immigrants is depicted, as well as an angel whose wings spread across the piece itself. Each person is looking ahead in pursuit of an improved way of life for themselves and their families.

Schmalz chose the number 140 to mirror the 140 statues of saints on the colonnades of St. Peter’s Square, sculpted by seventeenth century Italian artist Gian Lorenzo Bernini. Schmalz hoped to reflect the modern experience of refugees in comparison to those of the saints, who often shared similar stories.

Sheila Gallagher, the studio art major coordinator, said she’s thrilled to see this sculpture in such a prominent location on campus. Gallagher spoke with Schmalz during a Zoom conference on social justice through art on Nov. 2.

“The artist believes strongly in public demonstrations of Christianitiy and interruptions to our everyday lives that art can make that help us to be reflective,” Gallagher said.

Gallagher hopes this will be a springboard for further conversation and reflection on the issue of immigration for society today.

“Art, like Angels Unawares, can be a reminder and moment of reflection to connect with the pain of others,” Gallagher said. “It asks us, in whatever way is appropriate for each individual, to keep the reality of other people’s hurt close to us, to not block it from our vision.”

Surrounding the piece are prayer ribbons memorializing those who have died during the process of migration, whose names remain unknown. Students and staff can submit a name or prayer to be written on the ribbons.

Schmaltz’s ambition is to make viewers of his work feel like they are an essential part of each piece. As students and staff cross campus, many stop to observe the statue and read through its inscriptions which tell the unique stories outlined on each of the figure’s faces. The sculpture illuminates the human experience of immigration and the immense contribution it has had on our lives.

While Angels Unawares will only be on campus for the rest of November, the stories of the migrants will endure and conversations on the topic of immigration should continue.