Man with Knife Fatally Shot by Police in Newton

Newton police officers fatally shot a 28-year-old male who was carrying a knife at a store in Newton Highlands on Tuesday, after receiving a report of an armed robbery and subsequently being unable to de-escalate the situation, alongside Massachusetts State Police troopers.

According to Middlesex District Attorney Marian Ryan, Newton Police received a 911 call at approximately 1:43 p.m., from the candy store Indulge! on Lincoln Street.

“This is a tragedy and we feel this loss of life deeply. My heart goes out to everyone who was touched by what happened in the heart of Newton this afternoon, including the family of the young man who died,” Newton Mayor Ruthanne Fuller said in a statement on Tuesday.

Ryan said in a press conference on Tuesday that two Newton police officers first arrived at the scene and located the man, who was a resident of an apartment above the candy store, in possession of a knife. The officers then pursued the man to the third floor of the building, according to Ryan.

Ryan said that the police called for backup, including additional police officers and a clinician with mental health expertise. Additional Newton police officers arrived on the scene, as well as two Massachusetts State Police troopers.

Newton police officers used less-than-lethal force to subdue the man by using a beanbag shotgun, according to Ryan. One of the Massachusetts State troopers also used a taser at 2:01 p.m.

“Both of those uses of non-lethal force were unsuccessful in detaining the subject,” Ryan said.

Ryan said that two Newton police officers then fired their service weapons, striking the man carrying the knife, who was subsequently transported to Newton-Wellesley Hospital and later pronounced dead. The name of the man who was killed has not yet been released, pending next-of-kin notification.

Ryan said that several officers were hospitalized after the incident but none sustained serious injuries.

“Members of the public here in Newton, though, please know that this incident is over, [and] that it is now safe here in Newton,” Fuller said. “Our hearts go out to the family of the young man who was lost.”

Ryan said that the District Attorney’s Office is still in the early stages of the investigation and that additional information, including the facts and circumstances of the altercation, will be released as it becomes available.

“The Newton Police Department looks forward to cooperating fully with the District Attorney and with the state investigation, and we are so thankful there will be a thorough and complete investigation,” Fuller said. 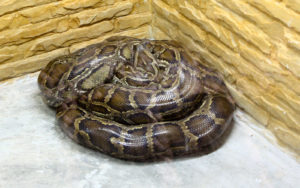