It’s not just difficult to be the voice of a generation—it’s nearly impossible. The moniker bestowed upon the likes of Bob Dylan and Kurt Cobain carries a certain gravity that can either send its recipients spiraling down a well of failed expectations or motivate them to prove their ability to tackle both emotional and melodic universality on a global scale.

Arlo Parks, however, does not falter under the pressure of such a title. Instead, it seems the London singer has the lyrical talent, musical ability, and emotional depth to carry the weight of a generation plagued with tragedy on her back.

A true member of Gen Z, 20-year-old Parks’ music gained recognition in 2018. Within a year, she had a landed manager, released and amassed millions of streams on her single “Cola,” and signed with Transgressive Records. Soon after, she released her first EP ​Super Sad Generation ​in April 2019, followed by several singles off  her second EP ​Sophie​.

As time went on, Parks only became more and more popular. Parks’ meteoric rise to low-level indie internet fame seemed almost too good to be true. But, upon listening to her smooth vocals and poignant lyrics that pepper her debut album ​Collapsed In Sunbeams​, it’s clear why Parks has been dubbed the voice of a generation.

Collapsed In Sunbeams ​is virtually perfect. Beginning with a self-titled spoken word track, Parks’ sweet and prominent British accent permeates through each and every carefully curated sentence, setting a warm honey tone for the rest of the album. Next is “Hurt,” a drum-driven piece of music vaguely reminiscent of U2’s “Sunday Bloody Sunday.” As Parks soothes a young adult crippled by emotional pain in her trademark and intimate ways, her audience is able to get a clear idea of the sense of comfort that her music induces. She sings, “​Charlie melts into his mattress / Watching Twin Peaks on his ones / Then his fingers find a bottle / When he starts to miss his mum.”

Parks isn’t just writing about her own experiences—she’s writing about the experiences of sad young adults everywhere. ​What makes “Hurt” standout is the fact that it sounds like Parks is directly addressing her listeners. As she sings “​I know you can’t let go ​/ ​Of anything at the moment / Just know it won’t hurt so / Won’t hurt so much forever” over and over again, Parks acknowledges the widespread decline in the mental health of Gen Z.

Tracks like “Just Go” and “Eugene” are light, summery tracks on an otherwise emotionally heavy album, whereas “Caroline” and “Hope” explore the darker tones of Parks’ lyricism. The standout track, however, is undoubtedly “Black Dog.” First released at the beginning of the worldwide COVID-19 lockdown as a single, “Black Dog” struck a chord with listeners for the same reason that “Hurt” does.

On the darkly angelic track, Parks begs and pleads with a friend suffering from depression to take care of themself, singing “Let’s go to the corner store and buy some fruit / I would do anything to get you out your room.” This sort of earnest encouragement is where ​Collapsed in Sunbeams truly finds its legs and establishes an incredibly intimate relationship between Parks and her audience.

While Dylan’s music inspired the culture shock of the 1960s and Cobain’s sing-screaming brought corporate disenchantment into mainstream America, Parks’ moment as the “voice of a generation” is a completely different one. Rather than being angry or inspired, Parks is simply trying to recuperate from what seems like a generational existence riddled with social upheaval and impending doom. She is not pissed off, nor is she necessarily revolutionary. Parks is simply tired of the never-ending gloom that saturates the everyday lives of Gen Z and beyond. ​Collapsed In Sunbeams is her way of letting young adults know that they are not alone. 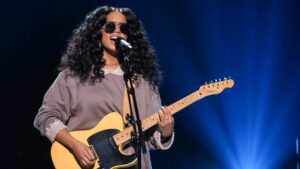