Home » “Why Is It Only Our floor?… Why Us?”: Multicultural Learning Floor Vandalized Saturday Morning
News, Top Story

“Why Is It Only Our floor?… Why Us?”: Multicultural Learning Floor Vandalized Saturday Morning

Ayanna Rowe was startled awake in the middle of the night by the sound of chaos in the hallway just outside her dorm room in Xavier Hall.

“I was literally startled out of my sleep at like 2 a.m., and I heard banging, and I was like, ‘What’s going on?,’” Rowe, a resident of the third floor of Xavier Hall and MCAS ’24, said. “Someone [had] just ransacked our hallway … We just saw trash all over the floor.”

The Boston College Police Department identified two individuals responsible for vandalizing the women’s Multicultural Learning Experience (MLE) floor—the third floor of Xavier Hall on Upper Campus—in the early hours of Saturday morning, according to an email sent to the residents of Claver, Loyola, Xavier, and Fenwick (CLXF) from BC’s Office of Residential Life on Sunday obtained by The Heights.

The perpetrators tore off door decorations, knocked aggressively on doors, and spread trash along the hallway, the Saturday email said. Multiple sources who live on the floor confirmed to The Heights that the individuals also punched out two ceiling tiles.

MLE, one of the 10 Living & Learning Communities (LLC) on campus, focuses specifically on celebrating and promoting acceptance of diversity, according to the ResLife website.

The vandalism was confined to the MLE hallway of Xavier Hall, multiple sources who live on the floor confirmed to The Heights.

Rowe said she was initially not surprised by the ruckus, because last semester residents on the floor experienced people banging on their doors in the middle of the night, but the targeted vandalism heightened her concerns.

“I just thought it was people acting up. They were banging on our doors and would do crazy stuff,” Rowe said. “I didn’t think anything of it. But when I heard it was just us, and I saw it for myself, the wheels were turning in my mind like, ‘Is this a target?’”

The perpetrators are not residents of CLXF, according to the Sunday email from ResLife. The BCPD officer investigating the case identified the individuals, who later confessed to the incident, the email said.

BCPD Chief William Evans did not respond to a request for comment from The Heights.

In a Saturday email to the CLXF community initially reporting the incident, ResLife said that the BC Code of Conduct prohibits the behaviors that the perpetrators of the incident exhibited, including discriminatory harassment, bias-motivated conduct, and property damage. The perpetrators will be held responsible through the University’s conduct process, according to the email.

“I speak on behalf of the Office of Residential Life that we are especially disappointed in the display of this behavior,” ResLife said in the Saturday email sent from CLXF Resident Director Robert Terreri. “It is our mission within Residential Life to create safe and inclusive communities for ALL our students from all backgrounds, experiences, and identities at Boston College. There is simply no room for the behavior that occurred last night.”

Sierra Sinclair, a resident of the MLE floor and CSON ’24, expressed her frustration that her hallway was specifically singled out.

“Looking down the hallway and seeing that no one else’s floor was trashed, it was a little bit like ‘What’s going on? Why is it only our floor?,’” she said. “Why do we have to always hear loud noises that interrupt our sleep? Why us?”

For Srina Lacet, MLE resident and MCAS ’24, the fact that only the MLE floor was trashed indicates that she and her hallmates were being targeted.

“If it was people especially who didn’t live in our building, let alone didn’t live close to us, coming up to our hall and only doing it to our section of the hallway when CLFX is a big, long building, it’s too much of a coincidence,” Lacet said.

FACES, an anti-racism group on campus, said in an email to The Heights that it is disgusted by the targeted hate crimes against students of color on the MLE floor.

“While we are reaching out to BC staff and demanding that action be taken to ensure the safety and security of students on the MLE floor, students cannot be responsible for policing clear acts of bullying and vandalism,” the email reads. “Ultimately, the Boston College administration has broken that covenant into which it enters with all BC students by failing to protect the students of the MLE floor, and students of color more generally from racism.”

FACES also said that it will be meeting this week and releasing a longer statement regarding the incident, as well as promoting additional resources for the BC community on its social media.

Why is it only our floor? Why do we have to always hear loud noises that interrupt our sleep? Why us?

One student, who spoke under the condition of anonymity, said that the incident reflects the comfort level that some BC students have in being disrespectful toward students of color. Opportunities at BC to have tough conversations about race oftentimes do not involve those who need to hear them most, she said.

“The AHANA+ community really did show a lot of support to the MLE floor,” the student said. “I know they had a town hall for students on the MLE floor, but it kind of just again felt like we were the only ones having these important conversations. Like yeah, we get that [BC wants] to give us a safe space to voice our concerns, but then it’s like we’re only voicing our concerns, and what is actually changing?”

In an email to The Heights, Jack Lewis, Chief of Staff for the Undergraduate Government of Boston College and MCAS ’21, said that UGBC has discussed the incident in multiple meetings with administrators and UGBC members.

“We remain committed to the ideal that no students should feel unsafe in their residence halls, nor anywhere else on our campus,” Lewis said. “We want to offer our continued support for the students affected, and make clear UGBC is always here for them.”

In a UGBC Student Assembly meeting on Sunday night, Christie Louis, a member of the AHANA+ Leadership Council and MCAS ’24, asked Associate Vice President for Student Engagement and Formation Tom Mogan how BC will work to help students of color who do not feel safe at their own school.

“That’s part of why I’m here is to listen to your thoughts [and] suggestions, to gather feedback,” Mogan said. “And obviously there’ll be a series of conversations starting tomorrow about what we can do for the larger community and how to address a larger community. Immediate concerns were obviously the residents who are directly impacted by it.”

Gianna Russi, a Student Assembly Representative and MCAS ’22, said at the meeting that the BC community can no longer accept this sort of behavior.

The vandalism was reported to the Office of Institutional Diversity and documented in their Intolerant Incident database, the ResLife email said. All freshman residents will be required to meet virtually with their resident assistants to discuss community expectations and to attend Bystander Intervention program presentations in the coming weeks, according to the email.

Administrators and ResLife met with MLE for a town hall on Saturday night, multiple MLE residents told The Heights, and Rev. Michael Davidson, S.J., director of the Thea Bowman AHANA and Intercultural Center, met virtually on Monday night with both the men’s and women’s MLE floors to discuss the incident.

Senior Associate Director of University Communications Ed Hayward did not respond to a request for comment from The Heights.

Rowe believes that the University’s response to this incident will set a precedent for similar behavior that might follow.

“I will have to see how they handle the two individuals that did this,” Rowe said. “How they handle it will be enough for me to see how much they care, because that’ll set the precedent for any other people that feel like they have the authority to make racially-motivated attacks against us. How they handle this will be more than enough to show how Boston College feels about race and racial incidents and how they take care of them.”

Ijaabo Ali, a resident of the Seacole Scholars LLC and CSON ’24, said she was worried that the vandalism that occurred in Xavier 3 would happen to her floor too. The Seacole Scholars LLC, which is designed for first-year nursing students of color, is located in Medeiros Hall—the building right beside CLXF.

“I was like, ‘So that happened on Xavier three last night, is it going to happen to me next?’” Ali said.

Ali said that she was saddened for the students of color who were coming onto BC’s campus for the first time, because this incident will have tainted their first experience being a student of color at BC.

“People were just confused as to what caused it because we were like, what, three days into everyone being back on campus?,” Ali said. “So I don’t think this is like personal beef that someone has [with] someone on the floor. It seemed like it was just anger at the floor in [its] entirety.”

Ali said that she hopes the BC community understands the significance of the vandalism, because if it fails to acknowledge the incident, a future occurrence may cut students of color even deeper.

“Though this may seem like it’s a small thing … things like this have a tendency to escalate,” Ali said. “And I feel like the fact that BC as a whole is not speaking on it, what, 72 hours later, is giving it room to fester. I’m afraid that the next time something like this happens, it’s going to be a lot more painful as a student of color because it’s going to seem like once again, BC is failing students of color.”

Featured Image by Yiwen Xiong / For the Heights 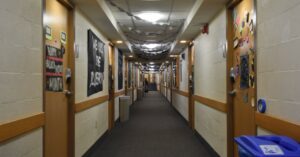