Home » ‘Proof’ Explores the Complexity of a Father’s Legacy
Arts, On Campus

‘Proof’ Explores the Complexity of a Father’s Legacy

Proof pulls its audience in with a storyline that never fails to captivate: the tale of a troubled genius. The audience can imagine piles of notebooks teeming with scribbles as they watch irritable, closed-off characters brood over their work and dysfunctional lives.

The Boston College Theatre Department production, which ran from Feb. 4 through 7, adapted to COVID-19 protocols by streaming the performance live on Zoom. The actors wore clear masks and rarely came into physical contact with each other. A budding romance is noticeably buffered by mandatory distance and the production relies on tense and emotional dialogue to build relationships between characters.

The play, originally written by David Auburn and directed by Jacob Kelleher, Lynch ’21, follows Catherine (Olivia Sheridan, MCAS ’22), the daughter of Robert (William Dooley, MCAS ’22), a brilliant mathematician who also suffered from a serious mental illness, as she grieves the death of her father and grapples with his legacy.

In the aftermath of Robert’s death, Catherine and a former student of her father’s, Hal (Grant Whitney, MCAS ’22), sort through the piles of notebooks he left behind. While Hal is searching for signs of groundbreaking mathematical discovery, Catherine remembers her father’s manic episodes and doubts that there’s any revelations hidden in the notebooks.

The sparse set, decorated as a drab porch with some mismatched chairs, allows animated arguments and complicated family dynamics to be the central focus of the actors’ performances. The arrival of Catherine’s sister, Claire (Emma Thompson, MCAS ’23), brings a new wave of defensiveness from Catherine, as she resists Claire’s efforts to help her move on with her life. The sisters’ contentious discussions communicate the complexity of every person’s grieving process. Catherine pushes people away, burying herself in her memories, while Claire enters Catherine’s life eager to fix everything.

The production takes advantage of technology as scenes fade out with haunting music and the Zoom screen indicates the time of the scene as the play jumps between flashbacks and the present.

Divided into nine scenes, the play uses flashbacks to reveal the complex relationship between Catherine and her father. At the same time Robert needed his young daughter to cook dinner and clean their dilapidated house, he also encouraged Catherine to pursue her own education and research in mathematics. Robert rambles on about wasting time as he feels his ability to work as he once did slipping away, but also ponders the privilege of having time to wonder.

A shocking discovery at the end of the first act sets the scene for Catherine’s continuous conflict with her sister and Hal. In the final scenes, Catherine faces her future alone as the other characters doubt Catherine’s capabilities. Catherine is forced to crawl out of the shadow of her father’s success and deteriorating mental health, and confront how to move on from her father’s death.

“My education wasn’t from Northwestern,” Catherine said. “It was living in this house for 25 years.”

Proof attracts its audience with the archetype of a tormented yet brilliant figure, but moves viewers with its emotional portrayal of grief and the relatable experience of wandering through life lost and without purpose. Through Catherine’s story, the play asks the question of how people form connections and when it’s time to stand alone. 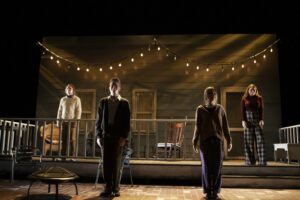 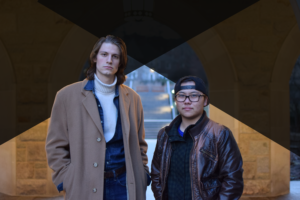 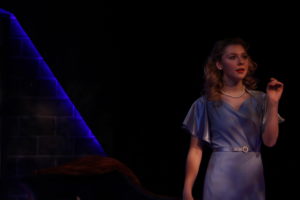