Home » Slowthai Showcases His Vulnerable Side in ‘TYRON’ 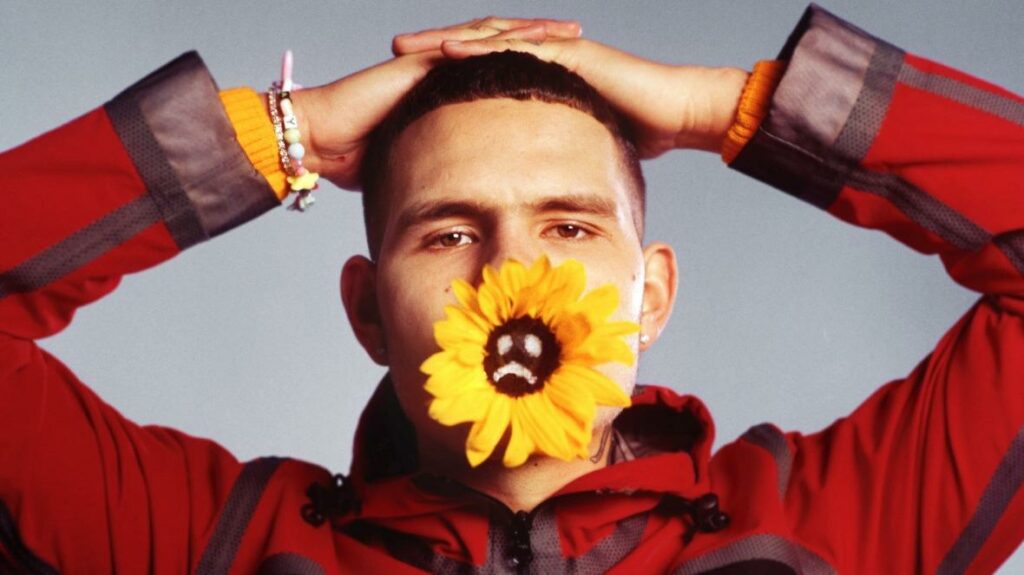 Slowthai Showcases His Vulnerable Side in ‘TYRON’

In 1977, Johnny Rotten of the Sex Pistols sang, “God save the queen / She ain’t no human being / There is no future / In England’s dreaming.” Nearly 10 years later, in 1986, Morrissey of the Smiths sang, “Her very Lowness with her head in a sling / I’m truly sorry but it sounds like a wonderful thing.”

And just recently, on the title track of his 2019 album, Nothing Great About Britain, Slowthai rapped, “I will treat you with the utmost respect / Only if you respect me a little bit Elizabeth, you c–t.” Combining the acerbic wit of the British punk era with the swagger of Dizzee Rascal and other grime trailblazers, Slowthai has crafted a voice that is utterly his own—at once an advocate for the downtrodden, yet also a fierce critic of Boris Johnson’s populism and its xenophobic undertones. Case in point, Slowthai brandished a replica of the prime minister’s severed head on stage at the Hyundai Mercury Prize Awards in 2019.

Born Tyron Frampton in Northampton, England, his nom de guerre Slowthai is inspired, like much of his work, by his childhood and outsider status—his friends called him “slow Ty” because of his tendency to slur his words. Indeed, on his newest album TYRON, Frampton struggles to escape the self-destructive tendencies of his teenage years. Ultimately, if Nothing Great About Britain was Framptom’s manifesto, TYRON is an investigation of the adversity that shaped his political conscience.

Divided into two seven-track parts, the album explores the nature of the actual and the aspirational—the question of whether we can escape who we are and become who we truly want to be. The first half sees Frampton indulge his usual manic impulses—flaunting his lyrical chops and material success with lovable braggadocio. In the second half, however, Frampton abandons his Slowthai act for a character no less captivating yet infinitely more vulnerable—himself. The second half—which features all lowercase titles compared with the all-caps stylizations of the first half—is remarkably subdued and introduces us to an overwhelmed 26-year-old grappling with his newfound fame. Slowthai fans, meet Tyron.

One of the starker moments of introspection arrives on “i tried,” the first track on the album’s second act. Producer Kwes Darko samples Trey Gruber’s chorus “I tried to die / I tried to take my life / I tried” at the beginning of the track—a chorus made all the more heavy by the death of Gruber in 2017 after a long battle with heroin and alcohol addiction. Frampton is anxious to avoid the fate that befell Gruber and, after the chorus, raps “Ayy, long roads, took a tumble down this black hole / Stuck in Sunday league but I’m on levels with Ronaldo.” Here, Frampton is frustrated that he recognizes his potential, yet he is helpless to escape his inner demons.

An equally intense moment arrives on his final verse of the album on “adhd.” Here, Frampton vents about his manic psyche and explores the effects of ADHD through a series of evocative metaphors and allusions. At one point, he raps, “Caught in Charlotte’s Web, I can’t feel myself / Mind complexity be the death of me.” At another—his distorted vocals echoing over a sinister piano instrumental—he howls, “And this stress soon to give me alopecia / And I’m vexed tryna smile like Mona Lisa.”

Brilliant instrumentation and despondent lyricism do not appear solely on “i tried” and “adhd” but rather abound on the album’s second half. In addition, the second half’s introspective character study is elevated by the contributions of multiple collaborators. On “terms,” Dominic Fike provides an indie-soul chorus, “push” features plaintive acoustic strumming and whispery vocals from Deb Never, and “focus” is anchored by a zany Kenny Beats instrumental. Frampton succeeds on the album’s second half by steering clear of the performative self-pity of Drake’s Take Care and the vapid fetishization of drug abuse found in emo rap—ultimately opting instead for a meditation on the pitfalls of fame that is honest, insightful, and moving.

Although the second half of the album is exceptional, and a considerable departure from Frampton’s previous style, I would be remiss to neglect the first half of the project. In fact, the first half contains what are arguably the two most “radio-ready” hits—“CANCELLED” and “MAZZA.” On “CANCELLED,” Frampton enlists Skepta as his partner in crime as they rant against cancel culture. The inspiration for this track most likely came from Frampton’s widely criticized conduct at the NME Awards.

Meanwhile, on “MAZZA,” Frampton joins forces with A$AP Rocky for an acid-inflected, roller-coaster ride with an equally disorienting music video taking inspiration from the films Fear and Loathing in Las Vegas and Trainspotting. The beat is manic, the bars are breathtaking, and Rocky is as suave as ever. While the songs on the second half will undoubtedly receive critical acclaim, “MAZZA” will surely boost Frampton’s mainstream appeal.

Russian novelist Aleksandr Solzhenitsyn said, “The battleline between good and evil runs through the heart of every man.” In a time where people are swiftly declared either heroes or villains, on this project, Frampton is neither. He is human.