Home » ‘IDK [What This Is]’ Pushes the Boundaries of Theatre
Arts, On Campus

‘IDK [What This Is]’ Pushes the Boundaries of Theatre

This year, with classes partly online and limited social gatherings allowed, students often find themselves cooped up in their dorms and surrounded by the same people day after day with mandatory quarantines testing relationships. In her original play, Maggie Kearnan, BC ’14, takes this social experiment even further. Instead of dorms, her characters are confined to an old house in middle-of-nowhere Wisconsin. With no phones and crumbling consciences, things get weird.

The Boston College theatre department’s spring season continued with the premiere of the play IDK [What This Is] on Thursday. Live streamed from Robsham Theater, the play ran from Feb. 25 to 28. Kearnan wrote the play between September 2020 and January 2021, keeping in mind that it would likely have to be performed under strict COVID-19 restrictions. The result is her first full production, complete with stage designs and set performance dates. Since the play is centered around the characters’ conversations and their shared memories, it is unreliant on the actors’ physical proximity to each other or their movements on stage.

Dialogue drives the play forward as six directionless young adults recount their time spent living in a large, decrepit house in Wisconsin. Most of the characters were seeking an escape from mundane jobs or troubled personal lives when they were all convinced to participate in a social experiment focused on self-reflection and contemplation on how to make the world a better place. Jay (Cameron Mysliwicz, MCAS ’24) is hoping to find something more meaningful beyond his office job, while El (Tristan Horan, MCAS ’22), an odd fellow with few connections, is looking for a place to belong. Alice (Grace Cutler, MCAS ’24) and Marci (Emily Couture, MCAS ’24, and understudy Emily Pollock, MCAS ’22) are also looking to escape their normal lives.

The idea of the experiment was hatched by Beth (Charlotte Teplitz, MCAS ’24), the idealistic leader of the group, who guides meditations and sets strict rules the six must follow during their months at the house. The circumstances, however, suspiciously begin to resemble a cult.

Kearnan said that by writing about a group of young adults she wanted to construct a story that was relatable for the actors and believable for the audience since the virtual play already demands elevated imagination for a viewer to picture the interactions between characters.

“I think it’s also a relatable concept for college life too, so it was also important to me that I wasn’t creating roles that were too far outside of the reality for the actors that would be playing them,” Kearnan said.

Katherine Van Riper, MCAS ’21, plays Hayden, an irritable, anti-establishment young woman trying to figure out what to do with her life. Van Riper said that the play felt timely in light of the isolation many people are experiencing during the pandemic.

“I think it’s really interesting because the whole play is about these six people who live in isolation,” Van Riper said. “And like that’s something, obviously, we’re all sort of aware of at the moment, and it really made me think about what you can do by yourself, or mostly by yourself, to try to become a better person.”

Unable to depend on set or prop changes, the actors had to set the scene themselves as their voices weave together to relate their struggle to all live peacefully together. Rich descriptions of the red-tiled kitchen and the living room where the characters gather to make confessions and imagine an ideal world, fill in the backdrop for the viewer.

While the actors seem to be telling the audience their stories as they look into the camera, the play creates a sensation of intimacy by inviting viewers into the scrambled memories of the six characters.

The set, designed by Crystal Tiala, an associate professor in the theatre department, was carefully crafted to allow the actors to perform without masks. Each actor sits enclosed within their own cubicle, creating the sense that the characters are in their own room within the house. The separated set requires the actors to depend on their tone of voice and facial expressions to communicate their character’s personality and the group dynamic, Van Riper said.

The production takes advantage of every pixel the virtual stage affords to develop the story and characters. Visual effects spotlight certain characters and lighting changes shine into the characters’ rooms and set the tone for tense scenes. Scott Cummings, director of the play and theatre professor, who taught and advised Kearnan when she was at BC, said the sets were created as extensions of each of the characters’ personalities and the experimental play is pushing the boundaries of theatre.

In a time when physical closeness isn’t possible, IDK [What It Is] examines the messiness created when people get too close. But, the play also deals with the serious topic of mental health, emphasizing the need for people to make connections and leave space for each other. 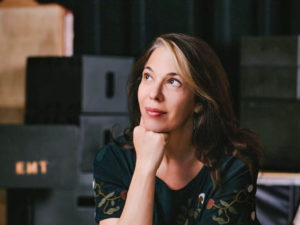