Home » BC Bats Go Cold as Tigers Light Up To Even Series
Sports, Spring, Baseball

BC Bats Go Cold as Tigers Light Up To Even Series

After handling the first two batters of the game, it appeared that junior right-hander Emmet Sheehan was poised to make another commanding start for No. 18 Boston College baseball at No. 25 Auburn. Sheehan struggled to commit the final out of the inning, however, and went on to walk three batters in a row. With the bases loaded, he gave up a single and then a grand slam to DH Cam Hill, which put Auburn up 5-0 after just the first inning.

The rest of the game told a very similar story, as the Auburn bats piled up 16 runs on BC. The Eagles (7-2, 2-1 Atlantic Coast) could not find any offensive momentum, as they squeaked out just one run and three hits on the game for a final score of 16-1. Auburn starter Mason Barnett pitched five scoreless innings for the Tigers (7-3), giving up just two hits and two walks.

After retiring the side in the second inning, it looked like Sheehan might have reestablished his command, but his struggles returned in the bottom of the third. Head coach Mike Gambino pulled the righty after giving up a two-RBI single to Tyler Miller due to his wild pitch. Command was a problem throughout his start, which included four walks and a hit batter. Miller ripped his single while on a 3-0 count.

This was a much different Sheehan than BC fans have seen thus far this season. In his first two starts of the season, he earned the win in both games while fanning nine batters in each. Against Auburn, he only stayed in for two innings and racked up 70 pitches in which he gave up three hits, four walks, and eight runs.

BC employed five different pitchers in Auburn’s rout, including Joe Mancini, John West, Brad Lombardi, and Samrath Singh. Mancini gave up three runs and five hits over two innings, and West gave up four runs and two hits over two innings as well. Singh struck out two of the three batters he faced, pitching the bottom half of the eighth for the Eagles. Every BC pitcher except for Singh gave up a home run to the Tigers, and Auburn totaled four home runs on the day.

First baseman Miller had a huge day for Auburn, going 3-for-3 with a home run, six RBIs, and three runs. Third baseman Rankin Woley scored five runs for the Tigers after being hit by a pitch twice and going 2-for-2 with a double and a home run. Hayden Mullins struck out four, pitching the last two innings for the Tigers to seal the victory. 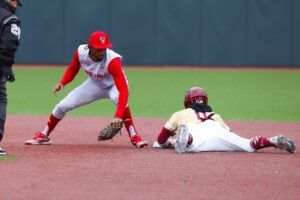 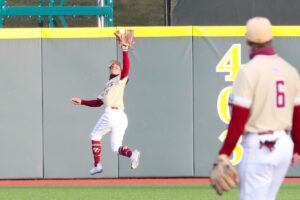