The vaccination site at Fenway Park will close on March 27 to allow the Red Sox to practice for their upcoming season. Vaccines will instead be administered at the Hynes Convention Center beginning on March 18.

Hynes will have the capacity to administer about 1,500 vaccines per day, as at Fenway currently, Governor Charlie Baker announced in a press conference Thursday. If the vaccine supply increases later this spring, over 5,000 vaccines will be available per day at Hynes.

The change in vaccination site follows Baker’s Feb. 25 announcement that large sports venues, including Fenway, can open at 12 percent capacity for the upcoming season beginning March 22. The closure of the Fenway vaccination site will allow the Red Sox to practice ahead of their season, which is scheduled to begin on April 1.

“The fundamental purpose of Fenway Park is to provide a place for the Red Sox to practice and play baseball. They did a beautiful job of envisioning how you could turn it into a vaccination site,” Baker said. “The Hynes will also be able to scale up to a significantly larger number without the distraction that would come with being part of a ballpark that’s actually active.”

Baker said that the supply of vaccines from the federal government has been limited, leading to his Feb. 17 decision to concentrate vaccine distribution at Fenway Park and Gillette Stadium. This caused local vaccination sites, including two sites in Newton, to no longer accept first dose appointments.

Due to high demand and a very limited vaccine supply from the federal government, all appointments at mass vaccination locations for next week have been booked.

The notice of the Fenway vaccination site closure follows Baker’s Wednesday announcement that K-12 teachers, childcare workers, and school staff will be eligible to receive the COVID-19 vaccine beginning March 11. This will add an additional 400,000 people to the eligible population, according to Baker.

“The fact remains, we are still only going to get about 150,000 first doses every week,” Baker said. “We’d like everybody to get vaccinated as quickly as possible, but it will take time to move the current folks who are left in the 65 plus and two comorbidities categories, who want to get vaccinated, through the system, as well as the 400,000 educators who would be part of this group.”

Governor Baker covid-19 vaccine
BC Bats Go Cold as Tigers Light Up To Even Series
Frelick and Gold Put on a Show, BC Comes Back From Eight-Run Deficit To Beat Auburn 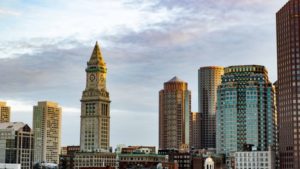