Women’s History Month As A Crossroad For Justice

March is a highly anticipated month in my family. The first of March marks the beginning of Women’s History Month and Mărțișor (Mer-tsee-shore) in Romania (and Moldova!). On March 1, people receive and give mărțișoare (mer-tsee-shu-ar-eh), a broach to be worn until the end of the month as a celebration of the upcoming spring. Closely following on March 8 is International Women’s Day, which effectively operates as Romania’s Valentine’s Day: People give flowers and chocolates to the women in their lives that they love. This year, my mom gave me a potted primrose for the two holidays, and we called my grandparents in Romania to celebrate my grandmother. In short, March is a special occasion for me and many other Romanians when we celebrate women.

Since high school, the dominant gender power that influenced my life has been feminine. My mom, aunt, grandmother, teachers, friends, and all of my mom’s close girl friends have always supported me. Their support has helped me build trust in my gender identity as a woman through the years.

These women set the example for all the options I have for the life ahead of me. I chose to pursue a career in STEM because I was never told about the barriers that exist for women in STEM. Many of the women I love—including my mom—are scientists. If I really wanted to choose something else, though, I know I could do so with the support of the women in my life.

A month dedicated to the power of femininity feels appropriate to me, not because women need a whole month of celebration due to their historical oppression, but because women deserve appreciation. The month of February, though, is important for a different reason. I have always seen Black History Month as justified because of the history of slavery in the United States and the violence that people of color experience, but Women’s History Month feels like a custom with less purpose and intention behind it.

Of course, I am biased since I come from a country where women are valued for being women, and I was brought up by a mother who practically sold her arm and foot to make my life easier. So, I did not understand the degree of oppression that women face in the United States when I was younger.

February always started the conversation about Black history in school—my English classes always read works from the Harlem Renaissance and literature dealing with the Civil Rights Movement. While I held a deep knowledge of Black history by sixth grade, I did not formally learn anything about women’s history until 10th-grade American history.

When I compared and tried justifying the difference between learning about Black history and women’s history, I was limiting the idea of women’s history to my own experiences as a white woman. My gauge on “historical pain” was an inaccurate and biased measure of determining which of the two topics is more significant to be taught in schools. I didn’t understand the pain of Black women—who experience the intersection of Blackness and femininity. I also left out a crucial group of people in my understanding of women’s history: non-white, queer people.

I am grateful that my school emphasized Black History Month, but just because February and March are separate months does not mean that women’s history and Black history are separate causes. Rather, the reason Women’s History Month isn’t more widely celebrated in America is because we are not ready to confront issues of intersectionality. The way I was taught, the way I live, and the way that many Americans view political issues involving race and gender is far too linear. Women’s History Month is an extension of Black History Month, plus more. 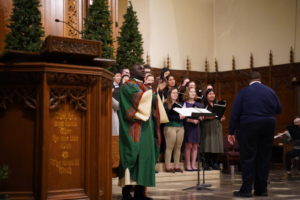