Former Boston City Council President Kim Janey was sworn in as the 55th mayor of Boston on Wednesday morning following the confirmation of Marty Walsh, BC ’09, as Labor Secretary on Tuesday.

“Today is a new day,” Janey said in her speech. “I stand before you as the first woman and the first black mayor of Boston, the city that I love. I come to this day with life experience that is different from the men who came before me.”

Janey was initially elected to the council in 2017 and became the first woman to represent District 7. Three years later she was elected to serve as the president of Boston City Council.

Although both Janey and Walsh are Boston natives, her background differs significantly from previous mayors.

“I grew up quickly, becoming a mother in high school,” Janey said. “I cleaned bathrooms to afford Smith College to give my daughter everything she needed to succeed. As I juggled it all, like so many others, I felt my first call to give back to this city that I love. I volunteered for Mel King’s historic grassroots campaign for mayor in Boston. And now, here I am, making history of my own.”

Janey’s induction follows President Joe Biden’s selection of Walsh as the secretary of labor in January. He is the first union worker to serve in the position in almost half a century.

In his letter of resignation, Walsh said that serving in the position has been the honor of his life.

“Over the past several weeks, my team and I have worked closely with Council President Kim Janey and her team on a smooth transition,” Walsh wrote in the letter. “Bostonians can have confidence there will be no interruption in city operations or services.”

In a farewell message to the city, Walsh described Boston as the city that gave him a second chance when he needed it—the place where he survived childhood cancer and the city that accepted his immigrant parents. Walsh also commented on the challenges of the pandemic and the resilience of the city.

Janey congratulated Walsh on his appointment and his seven years of service as mayor. In her speech, she said that there could not be a “more passionate advocate in Washington.”

Janey will serve as mayor until the November election and plans to continue Walsh’s work on pandemic recovery. She emphasized the need to increase testing and vaccination for the city in partnership with both the federal and state government. Janey said the city must do a better job of making vaccines accessible to the areas hardest hit by the pandemic.

Janey said that as a single mother who struggled to find quality public education for her daughter, she understands the importance of including school reopening and education in Boston’s recovery plan.

“Our recovery must include working together on behalf of our children,” Janey said. “That means safely reopening our schools and vaccinating our teachers.”

As a part of this plan, Janey said she wants to partner with local businesses, neighborhood groups, and faith based organizations to help children recover both academically and emotionally following the isolation of learning from home.

Janey said that the issues of affordable housing, public transportation, equitable wages, and the effects of climate change, while exacerbated by the pandemic, are not new.

“What’s different is that these problems now impact even more of us,” Janey said. “But I believe … these obstacles create an opportunity … to come together to heal and build a better and more equitable city.”

U.S. Representative Ayanna Pressley of Massachusetts’ 7th Congressional District was also present at the ceremony. She spoke about the historical significance of Janey holding the position, as well as her being sworn by Massachusetts Chief Justice Kimberly Budd, the first Black woman to hold the position.

“As she walks the path of a historic first, I can not think of a more poetic moment than sharing the stage with other Black women who are historic firsts committed to the upliftment of community,” Pressley said. “What a remarkable day for the city of Boston.”

Janey emphasized her commitment to improving the city, while persevering through the pandemic during the eight month interim period that she will serve as mayor.

“Our nation and our city are built on a promise that achieving your dreams is possible, regardless of race, religion, immigration status, income, gender identity, or who you love, but we have so much more work to do to make those dreams real for everyone,” Janey said. “And, we have to start by calling out the challenges facing our city openly, honestly, and transparently.” 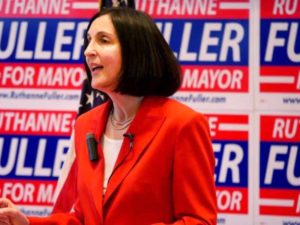