Medjid, Hall Come Up Clutch in Last-Minute Win Over Syracuse

Early in the first half of Thursday’s top-five matchup between Boston College lacrosse and Syracuse, the broadcast panned to BC head coach Acacia Walker-Weinstein. She motioned her palms down to the turf, and without fans in the stadium, her voice was clear as day as she told her players to “settle down.”

The teams didn’t have much on the line other than pride—BC and Syracuse are guaranteed either the second or third seed in the upcoming ACC Tournament, depending on how this weekend’s two-game series pans out—but the tension in the Carrier Dome was so palpable that Walker-Weinstein could have cut it with a knife, hence her pantomimed message to her team.

Caitlynn Mossman earned credit for the assist on Medjid’s game-winner, adding to her already standout night. In addition to her game-winning assist, Mossman recorded a hat trick—her first of the season—on just three total shots. She also got the scoring started for the Eagles 3:29 into the game.

Despite the high-octane offenses on both sides—BC is tied for third in the nation in scoring offense, while Syracuse sits at 12th in the same category—Mossman’s was the only tally through the first 10 minutes of the game.

Both the scoring drought and Walker-Weinstein’s plea to her team to settle down were brought on by air-tight defense on both ends of the field. Turnover after turnover came up empty on the other end, as BC maintained its lead not by scoring, but by shutting down the Orange’s offensive bids.

But once the floodgates opened, they never closed again. Starting with a tally from Medjid just over 10 minutes into the contest, the Eagles worked to a 4-0 run before Syracuse even recorded a single shot on goal.

One shot, however, was all Syracuse needed to beat BC netminder Rachel Hall. Megan Carney—the Orange’s leading scorer on the season—recorded her 47th and 48th goals of the year in rapid succession, just 27 seconds apart. Her goals were the spark Syracuse needed, as the Orange cut BC’s lead to as little as one in the first half.

Still, through 30 minutes, BC never relinquished its lead, regardless of how small it became. BC led 8-6 at halftime.

As has been the case all season, BC’s success on offense started with Charlotte North on draw controls. The senior won eight of BC’s 18 successful draw controls in the game, while Hollie Schleicher added six and Cara Urbank tacked on four. BC entered Thursday’s game fourth in the nation in draw controls with 220, exactly half of which belong to North.

Syracuse opted to face guard North practically from the first whistle to the last, but even constant pressure on the Eagles’ leading scorer couldn’t slow down BC’s dynamic offense. Even with a defender on her at practically all times, North still recorded five goals, including perhaps her most highlight reel–worthy tally of the season.

With five defenders surrounding her early in the second half, she coolly dropped her stick below hip level, firing the equivalent of a backhanded field hockey shot through the five-hole of Syracuse goaltender Asa Goldstock.

Even if Syracuse had managed to slow North down, BC’s scoring was coming from every cardinal direction. BC’s first six goals came from six different players, four of whom finished with multi-goal nights.

Syracuse made the game a little more interesting in the second half, taking its first lead with 18:01 to go in the game. For about the next seven minutes, the teams went goal for goal until BC finally notched two in a row to take the lead at 13-12 with 10:22 to play. That goal came from none other than North on a free-position rip that hit the net practically before Goldstock had time to react.

Sam Swart tied it up at 13-13 on an unassisted tally with 9:20 left in the game. It took over another eight minutes for Medjid to net her game-winner, but not for a lack of trying on either side. The teams combined for four shots in that span, and each committed a turnover, both of which were forced.

Hall made perhaps the most important play of the game with about 40 seconds left on the clock to prevent Syracuse from forcing overtime. As Sierra Cockerille, who already found the net once prior, tore down the middle lane and fired a bounder on net, Hall calmly corralled the ball to hold onto BC’s narrow lead.

With just one more regular-season game remaining—a rematch with Syracuse set for Saturday—BC doesn’t have much on the line. It has clinched at least a top-three seed in the ACC Tournament, and an NCAA Tournament bid appears not far behind given that four of the country’s top-five teams hail from the ACC. At the same time, a win over not only a conference rival but also a top-five team in the country carries plenty of weight on its own. 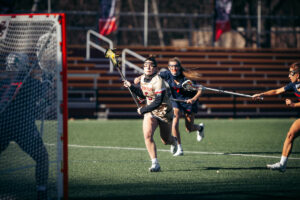