Twenty years ago, eight Newtonians lost their lives in the tragic events of Sept. 11. Twenty years later, Newtonians gathered in front of the fire department headquarters and around the Sept. 11 memorial. Together they remembered the lives lost on that day.

“We pause at a very special place, a place that you as a community have come to gather around to have a lasting and forever tribute for individuals who were lost on that day, this day, 20 years ago,” said Lieutenant Governor Karyn Polito, BC ’88.

“Mirroring our nation, we here in Newton lost daughters and sons, and son-in-laws, babies still in their mother’s wombs, granddaughters and grandsons, mothers and fathers, and step-parents, sisters and brothers, aunts and uncles,” Newton Mayor Ruthanne Fuller said. “We lost friends, neighbors, people of all ages, all religions, all ethnicities. We remember them all.”

To begin the memorial, the crowd collectively joined in the singing of the national anthem and “God Bless America” as they gazed at a large American flag hanging from the ladder of a Newton fire truck. As each speaker, including family members of those lost, stepped up to the podium, they stood beside a poster with the names and photos of the eight Newtonians lost that day.

“Beginning at 9:05 a.m., time stood still,” Ginny Gardner, the Newton 9-11 Memorial Committee finance chair, said. “Shock and fear overwhelmed us. We would come to learn 3,000 Americans perished including 343 brave firefighters, a chaplain, two brave EMTs, and 56 law enforcement officers. Later, here in Newton, we would learn we lost eight of our citizens.”

Losing a loved one on Sept. 11 is like missing a piece of a puzzle that will always be incomplete, Gardner said. Highlighting this sentiment, Gardner read the poem “One More Day,” which is about wishing to spend more time with those lost.

Acknowledging that some of the people in attendance are not old enough to remember the events, Fuller emphasized the importance of their role in memorializing those lost.

“For those of you who were too young to remember, or perhaps were not even born, the history that we are still writing about 9/11 from 20 years ago actually does give us all reason for belief and faith and hope,” Fuller said.

The members of the younger generation in attendance listened quietly but attentively. Lucas Johnson, a young Newtonian, led the crowd in the Pledge of Allegiance and other children sported red, white, and blue as a show of patriotism.

Polito said she educated her 16- and 18-year-olds about the events from 20 years ago, sharing stories from that day. Citing one such story, she described Boston College alum Welles Crowther, BC ’99, and his selfless bravery. She raised and waved her hand to display the red bandana around her wrist, which Crowther used to cover his face while inside the tower.

“He spent the last hour of his life not only running in, but running up a burning tower to save lives without regard for his own safety over and over again,” Polito said.

She urged the audience to use his example in their own lives through acts of kindness, helping those in need have a better life.

“If there’s one thing that we feel inspired about from attending these events today, it is to leave here with that sense of mission and purpose, to spread those acts of kindness in memory of all of those beautiful lives that we lost 20 years ago,” Polito said.

The City of Newton’s Director of Veterans Services Seth Bai, BC ’12, highlighted the sacrifices and bravery of first responders on Sept. 11 as well as today, pausing to wipe tears from his face as he spoke.

“We stand steadfast knowing that post 9/11 veterans and their families have raised their right hand before and will continue to lead our nation as assets—that veterans are America’s cornerstone and we are invested in them,” Bai said.

Gathering together after 20 years was a physical act of remembrance of the day and the lives lost. To conclude the memorial, the loved ones kept the spirit of those lost alive by reading their names and sharing stories about who they were to ensure their memories are never forgotten.

“Richard would have loved this,” Ross said. “He was the kind of man that filled a room when he came into it. People gravitated to him and loved him and he was just a special man. He left a footprint.” 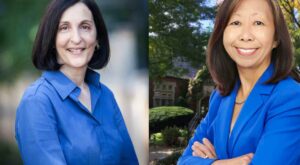 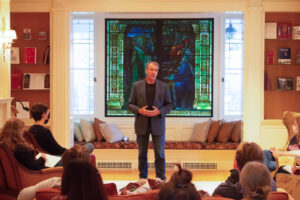