Though it won’t take the court for over another month, Boston College men’s basketball has been hard at work, particularly on the recruiting trail. Head coach Earl Grant and his staff did it once again this Friday morning, landing four-star Prince Aligbe’s commitment. Aligbe took to Twitter to make his commitment official.

Ranked 110th nationally and 20th for power forwards in the Class of 2022, according to 247Sports, Aligbe hails from Minnesota and played for Minnehaha Academy, where he averaged 11.2 points per game last season.

Aligbe was teammates at Minnehaha with Chet Holmgren, the No. 1 recruit in the Class of 2021. Minnehaha Academy is also the former home of Jalen Suggs, who was the No. 5 pick in the 2021 NBA Draft by the Orlando Magic.

Aligbe stands at 6-foot-6 and weighs in at 215 pounds, adding much-needed forward depth for Grant’s team. After Grant’s first two recruits, Donald Hand Jr. and Chas Kelley, were both guards, Grant appears to be filling out his lineup.

“Coach Grant is all about development, just look at the players he has put in the draft recently,” Aligbe said in his commitment announcement. “I want to go somewhere that has a staff of winners, and I felt that at Boston College. I think me and Chas [Kelley] and [Donald] Hand really complement each other’s games. I see us coming in and being able to grow together.”

BC’s recruiting class is now ranked 22nd in the country and 4th in the Atlantic Coast Conference. Aligbe said he wanted to go somewhere where the level of competition was at its highest and where he felt comfortable.

“I went on a visit last weekend and got to see everything in person,” Aligbe said. “I also got connected with the coaches. Boston College plays in the best conference in the country.”

He turned down offers from the likes of Cal and Ohio State. 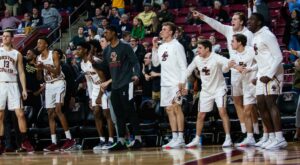 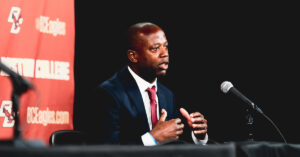