There will be plenty of new faces donning maroon and gold when Boston College men’s basketball kicks off its season this Tuesday against Dartmouth. After finishing with a record of 4–16 overall and 2–11 in ACC play last year, the Eagles, now led by new head coach Earl Grant after Jim Christian’s firing midway through last season, will look to set a foundation for the program with a largely unproven roster.

With so many roster changes heading into this season, only a handful of players from last season remain on BC’s 2021–22 roster. The Eagles have no players on their roster who have been on the team for more than a year, creating boundless discontinuity. Half brothers Makai Ashton-Langford and DeMarr Langford will certainly be leaders of the backcourt, bringing their experience from last season into a new team with hefty turnover.

“They’ve wanted me to play a little bit off the ball because we have a lot of guards, so there’s gonna be times when we might have to play small so I got to know a couple of the off- the- ball positions, be able to score, facilitate, move around off the ball and stuff,” Ashton-Langford said regarding his role this season. “So I feel like that’s the way my work has been changed from this year to last year.”

Younger half-brother DeMarr Langford will look to build off his promising freshman year last year. While also not much of a threat from deep, Langford displays special athletic talents with the ability to defend and grab rebounds—he averaged 4.2 rebounds per game last season—as a 6-foot-5 guard.

“He’s improved a lot,” Ashton-Langford said of Langford. “His mid-range has gotten a lot more consistent. It was pretty good last year too, but he’s a lot more confident and so this year, so I’m excited for that.”

James Karnik and Frederick Scott are the only returning forwards on the Eagles’ roster. While neither had standout seasons last year, both will look to have much larger roles under Grant. Scott missed most of last season with an injury but showed promise as a scorer when healthy. Karnik, standing at 6-foot-9 with a strong build, can also play the center position and will potentially start for the Eagles there. A good finisher around the basket, Karnik will look to provide stability for the Eagles down low.

Justin Vander Baan, a seven-foot sophomore, did not see much action last season. The former three-star recruit will look to get more involved under Grant. Forward Andrew Kenny is also back after appearing in nine games last season. Kenny will look to display his above-average shooting abilities and build off of last season after walking on freshman year.

Naturally, when there is a head coaching change within a program, a lot of departures will follow. The Eagles were no different when Christian was fired and Grant took over, as many players sought out new schools in the transfer portal.

Steffon Mitchell and CJ Felder, both starters for the Eagles last year, are gone this year, as Mitchell entered the NBA Draft after withdrawing from the transfer portal, and Felder is off to the SEC powerhouse Florida.

Jay Heath, perhaps the biggest loss for the Eagles, transferred to Arizona State, after playing over 30 minutes per game in his first two years at BC. Fellow starter Wynston Tabbs is also no longer in Chestnut Hill, instead taking his talents to East Carolina.

Other losses for the Eagles include Kamari Williams to Miami (Ohio), Rich Kelly to UMass, and Lukaá Kraljevicć, who graduated.

While the Eagles may have lost some players, bringing in a new coach also means new players will subsequently follow in the transfer portal. Brevin Galloway is perhaps the most significant acquisition of them all, a graduate transfer from the College of Charleston, who played there under Grant. Galloway brings much-needed shooting to the Eagles, as he shot 36 percent from behind the arc and averaged 15.0 points last season. With his connection to Grant, Galloway will seemingly have a big role this season, acting as a connection between his teammates and Grant. In fact, it was Galloway who helped integrate Grant into his new team here at BC.

Juniors T.J Bickerstaff and Quinten Post round out BC’s three-man transfer class. Bickerstaff, a transfer from Drexel who stands at 6-foot-9, brings scoring ability from inside the arc, as he averaged just over 10 points per game last season while shooting 51 percent from the field. Post, a seven-foot center from Mississippi State, offers much-needed size to the Eagles’ roster and will look to help interior defense.

BC boasts a solid freshman class despite a low national ranking. The biggest name of the bunch is 6-foot-8 forward Gianni Thompson. Thompson, a four-star recruit, was ranked the 33rd best forward nationally by ESPN in his recruiting class. A dynamic athlete who averaged 19.0 points and 9.0 rebounds his junior year, Thompson will look to develop into a big weapon for the Eagles.

Thompson is joined by fellow forward Devin McGlockton, who stands at 6-foot-7 and was an all-state selection out of Atlanta, Ga. McGlockton, who was also being recruited as a tight end for football out of high school, averaged 18.0 points and 10.0 rebounds per game at South Forsyth High School.

Kanye Jones and Jaeden Zackery are the guards of the group. Both players may struggle to see time freshman year but will look to gain Grant’s confidence on the depth chart.

Obviously, though, the biggest “acquisition” of them all is Grant. Grant most recently coached at the College of Charleston where he guided his team to one NCAA Tournament berth and one NIT berth.

The Eagles open up their season on Nov. 9 at 8 p.m., with Dartmouth visiting the Heights. A non-conference matchup to get into the flow of the long season should provide Grant plenty of opportunities to try many different lineups and experiment as he wishes.

Two more home games at Conte Forum will follow, with the Eagles taking on rival Holy Cross on Nov. 12, followed by Fairfield on Nov. 14.

Next up for the Eagles will be the Sunshine Slam Tournament that will take place from Nov. 20–21 in Daytona Beach, Fla. The tournament consists of eight teams, and BC’s bracket includes Utah, Tulsa, and Rhode Island. The Eagles will face Utah on Nov. 20 and an undetermined opponent on Nov. 21 depending on the result of the games.

Four of BC’s next five games will be against non-conference teams, which include Columbia, South Florida, Saint Louis, and Albany. The one ACC game in that mix is against Notre Dame in Chestnut Hill on Dec. 3.

Until the Eagles’ conference play truly begins on Dec. 22 against Wake Forest, BC has many winnable games on its schedule, but once the conference games start, wins will likely come much more sparingly.

The Eagles will play conference games from Dec. 22 all the way to the end of the regular season on March 5 against Georgia Tech. Some of the most important games on the conference schedule include a two-game stretch of where Syracuse and Duke visit the Heights on Feb. 8 and 12. The Eagles will take on Syracuse, Clemson, Notre Dame, Pitt, and Georgia Tech twice each during the course of conference play.

“I just want them to know there’s a price to pay and there is a consequence for losing and there’s reward for winning,” Grant said. “We’re not there yet. And that’s fine because, you know, usually if you’re there now, what would we coach you for?” 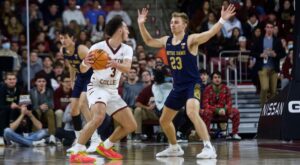 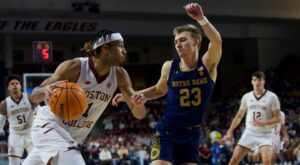 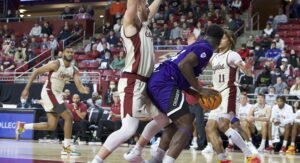