During the first minute of Boston College men’s soccer’s match against Clemson on Sept. 17, junior midfielder Amos Shapiro-Thompson tore his ACL. Shapiro-Thompson was crucial to BC’s gameplan throughout his first two seasons as an Eagle, earning All-ACC Freshman Team Honorable Mention and scoring the team’s third-most goals in his first year and fourth-most goals as a sophomore. Without Shapiro-Thompson, the Eagles had plenty of ground to make up. BC needed players to help fill the void of Shapiro-Thompson’s guidance and stellar play while he was sidelined.

Shapiro-Thompson plays with quick feet and precision, often weaving his way through the defense to set up teammates or to put the ball in the back of the net. The junior midfielder was also a team leader and key player with the 2016 Milton Academy team which won the ISL and NEPSAC Tournament by posting a 23–0 record.

Shapiro-Thompson simultaneously played for the academy team for the New England Revolution. He moved to Croatia to play for Dinamo Zagreb in 2017 and played for Legia Warsaw in Poland in 2018, professional experience that surely contributed to Shapiro-Thompson’s effectiveness as an Eagle and has been missing from the field in his absence.

Off the eye test alone, the midfielder looked faster than almost anyone on the field and could appear years beyond the competition. His ability to put the ball in the back of the net from distance was a constant threat for opponents and because of his capability to do so, he freed up opportunities for his fellow Eagles.

Shapiro-Thompson’s torn ACL was a detriment to the team’s offensive production, but it opened the door for other players to contribute. Junior midfielder Michael Suski and junior forward Stefan Sigurdarson, the team’s top goal scorers, who each finished the season with six goals, had to carry a greater burden of the team’s offensive capacity during Shapiro-Thompson’s absence. Suski, in particular, has provided the offensive spark for the Eagles, leading the team with 15 points, ranking 10th overall in the ACC in points per game.

The sophomore had very big shoes to fill. Dickens went on to start the remaining games, holding down the midfield throughout an undefeated run at home. He was a stabilizing presence for the team, executing technical passes and tackles. The Eagles also tallied vital ACC wins during that stretch, including victories over rivals Wake Forest and Syracuse. Graduate students Ian Buehler and Wil Jacques were essential to building confidence and among a young midfield core.

Along with Suski, Sigurdarson, and Dickens, freshman newcomers needed to step into more playing time. Freshmen Aidan Farwell, Drew Serafino, and Jonathan Murphy played extremely well during Shapiro-Thompson’s absence, most notably with Farwell’s goal to put the Eagles ahead against Virginia and Serafino’s opening strike to give BC the lead in a vital match against Northeastern.

Farwell, an attacking player who is adept at fooling defenders with his dribbling prowess, has taken on the burden of the facilitating role in Shapiro-Thompson’s absence. Along with senior standout Suski, Farwell shares the team lead for assists, recording three this season. The first-year class is especially strong this season and should look to carve out expanded roles in the coming years. Other standouts include defender Diego Ochoa and midfielder Sam White.

BC just completed its last regular season game, at NC State on Friday, in which the result was a hard-fought 1–0 overtime loss. Despite this loss, the Eagles had completed an undefeated season at home, posting a 5–0–2 record. While Shapiro-Thompson’s injury was problematic to the team’s offensive production, his teammates stepped up in his absence and gained valuable experience, while simultaneously putting the Eagles in a spot to compete in the ACC Tournament. 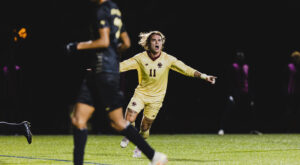 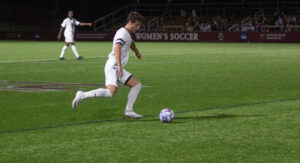