Home » A Win’s A Win, But Bring On The Weird 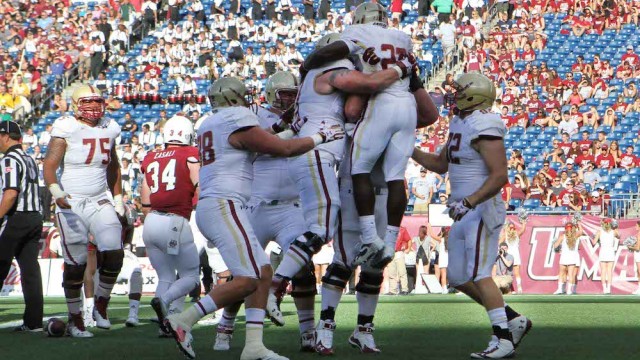 A Win’s A Win, But Bring On The Weird

On the first Saturday of college football in 2014, Tyler Murphy sprinted and stutter stepped his way to 118 rushing yards, Myles Willis and Tyler Rouse bruised UMass’ defense with 27 bulldozing runs, Boston College’s secondary bent frequently but only broke once, and the Eagles picked apart the Minutemen 30-7 in a game that started a few minutes late because UMass students walked approximately 67 miles through a desert of fire to reach their seats.

Despite the fact that BC somehow managed to rack up 276 offensive yards in the first half but hit the locker room with just a tenuous six point lead, Saturday’s strangest scene occurred midway through the fourth quarter.

With an uncomfortable combination of fascination and confusion, I watched as three grown men sporting black pants, black baseball caps, and burgundy No. 32 UMass jerseys pinned their arms to their sides and rolled back and forth behind the field goal like three pathetic hot dogs spinning on a shady turf hotdog roller.

For a time I managed to focus on the game again, but within minutes the terrific trio was back to their outlandish ways, lying on their backs and staring at the cumulus cloud-dotted New England sky, likely imagining a world in which UMass was not down 20 points and they did not have to imitate earthworms.

Finally, after waving their arms in unison and performing lackadaisical stretches, two of the worm impersonators got on their hands and knees to form a base, onto which the third hopped to provide the tip of a three-man pyramid. At that point, I determined that they were cheerleaders, and that I was not hallucinating, which I had secretly feared.

I bring this weird anecdote up for two reasons. One, it’s haunting me, and two, its surreal bizarreness presents a perfect anti-metaphor for The Battle Of The Bay State.

Heading into BC’s season opener, there was a very slim chance the Eagles were going to fall to the Minutemen. And they never came close to losing—even when the score was tight, Steve Addazio’s team was firmly in charge of the game. The way BC won, though, was exactly how a team that lost key leaders in every skill position can be expected to win in its first game. Mistakes were made, new guys stepped up, and it took a while, but BC found its groove. It was a perfectly adequate and predictable game, and the only truly unexpected maneuvers came from those UMass cheerleaders.

After losing Nate Freese, who stayed perfect through 20 field goal attempts in 2013, BC missed a field goal and cycled through two kickers, neither of whom Addazio seemed particularly thrilled with after the game.

As predicted, Willis and Rouse stepped into the big-time running back gigs, averaging 5.6 and 6.3 yards a carry, respectively, and Murphy showed exactly why Addazio brought a veteran quarterback in from Florida—with the exception of one bad throw, the QB was a sharp decision maker and excellent on the day.

Defensively, Josh Keyes was a physical presence to be reckoned with, and BC pressured the hell out of UMass all day and held the Minutemen to 202 total yards of offense.

Overall, not too much was revealed about Addazio’s team on Saturday. The pint-sized thunderbolt Sherman Alston only got in on a few plays, Murphy never had to worry about falling behind and playing catch-up, and BC stuck with the same game plan all day—pound the rock until it breaks.

But come Friday night, perfectly average isn’t going to cut it against a Pitt football team that blew Delaware into the stratosphere with a 62-0 beatdown. BC’s second matchup was already vitally important, and it just became significantly more interesting. I, for one, wouldn’t mind if it gets a little weird out there.