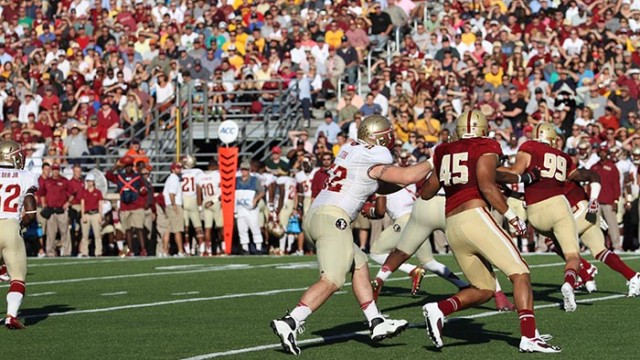 here is an innate contrast between Mehdi Abdesmad and the function that he serves on the football field.

In football, defense takes on a different nature. While on other fields you have a ball to protect or a goaltender to support, as a defensive lineman, the only thing that you have to protect is your field position.

Defense, in football, is an attack based on the aggression of the linemen, who do all they can to pin back the offense.

Abdesmad’s job is all about pressure and attack. He takes the field, lines up opposite the center, and jumps as soon as the ball is snapped. The 6-foot-7 defensive lineman from Montreal is charged with applying enormous pressure to anyone who gets in his way and doing his best to transfer that pressure onto the opposing quarterback and wreak havoc on the opponent’s offensive plans.

Have a conversation with Abdesmad, though, and the pressure and aggression that he exerts on the field vanishes. He’s not loud or flashy, but rather is soft spoken and of few words. When he does speak, in his short sentences with a hint of a French-Canadian accent, there are two phrases that come out of his mouth most often.

“I want to go hard every game.”

rowing up in Montreal, football was not always the clear direction for Abdesmad’s athletic pursuits. As a young boy, his father encouraged him to play soccer, but it didn’t last for long.

“My dad wanted me to play soccer,” he said. “Then I didn’t like it, and one day I was walking and saw a poster like, want to try football? I saw the guys practicing, and I tried it and I liked it.”

While his father didn’t initially approve, when he saw his 9-year-old’s aptitude at linebacker, he came around. Although Abdesmad’s father passed away when he was just 16, he never let the family tragedy deter his athletic pursuits.

“Me and my family were always tight, and that just made us tighter—they’re always coming to the games,” he said.

Abdesmad says that it’s his family—his mother and two older sisters—that motivates him to this day.

“My mom, she’s a really strong woman,” he said. “Since my dad died, she’s stayed really strong, with my family and all that. She was there for all my rehab, and she comes to every home game.”

These strong family ties played a role in his decision to come to BC. While he knew that he was looking for a good academic school with a strong football program, those are characteristics that any player will look for. For Abdesmad, there was one more.

“It’s a good school, a good program, it’s always been known for a good defense, and it’s close to home,” he said. “My family can come to games, so that’s best for us.”

Upon his arrival at BC, the biggest adjustment for Abdesmad came in terms of the speed of the game.

“As a freshman you have to learn to be fast and play strong, and you get used to the game and just get into it,” he said. “O-lines here, if you don’t go hard they’ll knock you off the ball, so you have to go hard.”

The decision made sense. Abdesmad had gotten bigger, and at 6-foot-7, 297 pounds, the only defensive player for the Eagles that surpasses Abdesmad in height is Brian Mihalik, and no one on the defensive line weighs more than him.

With the transition to defensive tackle going smoothly, 2013 was gearing up to be a break-out year. At his new position under the new coaching staff, Abdesmad was adjusting and building in the opening weeks. He had two solo tackles against Villanova, then two solos and three assisted against Wake Forest.

Those two solid performances led Abdesmad and the 2-0 Eagles up to a big test at USC, and while Abdesmad put up one of the best performances of his career with seven tackles and a sack for a loss of eight yards, the Eagles did not, losing 35-7.

“I’m trying to go hard every game,” Abdesmad said. “It’s not like if the team is losing, it isn’t anything, you have to go hard and try to help the team win. If I have a big game and we lose it doesn’t mean anything.”

BC faced another test the next week, this one against the eventual National Champion Florida State team. Despite most expectations, BC hung with the ’Noles for the better part of the game, and Abdesmad put together another powerful performance through the first half and into the second. In the third quarter, though, he rushed from the line, applying his pressure to Jameis Winston, and he was blindsided, the hit coming at a time when his foot wasn’t planted right—his left patellar tendon was torn.

The injury was season-ending, and Abdesmad had to watch from the sideline as the Eagles finished their first 13-game schedule since he arrived at BC.

“At first I was angry, but you just have to move on and get back,” he said. “It was hard. I came here to play football, so when I was off and seeing my team playing it sucked. I was staying in the booth and watching the guys playing.”

The road to recovery was a long one. Unable to play any spring ball, Abdesmad had to stay on the sidelines until the Eagles’ summer camp, focusing on rehab and assisting his teammates in whatever ways he could. Come camp, though, he was able to play, and with each day of practice he felt a steady improvement in his condition.

ith a new season comes a healed knee, and Abdesmad played in the Eagles’ first game last Saturday against UMass in which the BC defense held UMass with a firm grip, limiting the Minutemen to just 202 yards of total offense.

As a senior on a team that lost a significant number of its weapons on both sides of the ball, he sees it as his duty to transition into a leadership role, which is split an even 50-50 between upperclassmen and underclassmen. Once again, though, he does not take his leadership role with the aggressive, attacking nature of his position.

“I have to be a leader and just go hard and show the guys how to make plays,” he said. “I’m not a verbal leader. If I need to do it, I’ll say something, but usually I’m more like doing things.”

The example that he sets is one of calm focus before the snap and quick aggression after it. While he admits to feeling nerves on game day, he never lets those nerves get the best of him—especially when he steps on the field.

“In the locker room, I’m trying to make jokes and stuff, but on the field I’m more focused,” he said. “I’m not thinking too much, I’m just trying to do my job, that’s it.” His expectations for this season are simple. While some have jumped to make a comparison between his season this year and Kasim Edebali’s breakout last year, he shrugs off any of the pressure that may put on him, sticking to his guns and saying that all he expects from himself is to do his job and do it well. If he does that, he says, other good things will come for the team.

Abdesmad is not daunted by the Eagles’ first big test on Friday against a powerful Pitt run game. When he steps onto the field, it’s going to be another game day, and his calm focus will not be on expectations of a breakout season, but simply on doing his job, and his job isn’t to focus on dealing with pressure—it’s all about applying it.