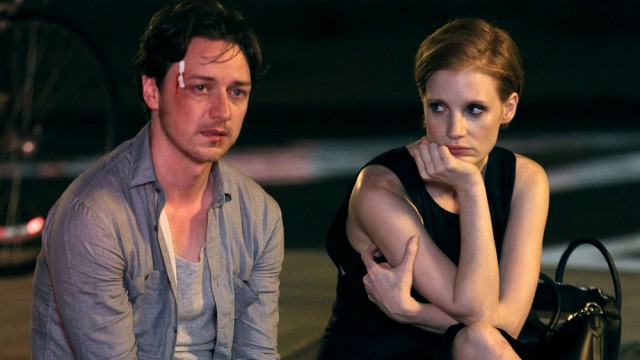 The film, however, includes virtually zero detail of the actual tragedy—Benson rather alludes to the incident by showing the effects this loss had on each parent. Eleanor and Conor handle the heartbreak in very different ways, with Conor striving for the return to normalcy while Eleanor finds herself swallowed by the devastation. In one of the first scenes of the film, Eleanor rides her bike to the Brooklyn Bridge and jumps off. Amazingly, she survives, but the miracle does nothing to raise her out of her depression. Following the incident, Eleanor and Conor effectively separate.

In a response to her suicide attempt, Eleanor moves back into her parents’ house. Her parents, who conveniently are professors, suggest that Eleanor start taking classes in an effort to bring structure into her life. Eleanor audits a class entitled “Identity Theory,” and she winds up forming a relationship with her professor, played by Viola Davis. Chastain and Davis have an amusing chemistry. The relationship feels authentic, with both characters a little rough around the edges. While on the surface their interactions give little background on the characters, their simpatico tells you more than any conversation could.

Conor grieves quite differently. A restaurant owner in New York attempting to break into the city’s already overcrowded restaurant scene, he does everything he can to return to normalcy. With the help of his restaurant’s chef, Stuart (Bill Hader), and bartender, Alexis (a lackluster performance by Nina Arianda), Conor slowly picks up the pieces—but his recovery only distances himself from his estranged wife, whom he spends the whole movie trying to find and with whom he desires to make amends.

McAvoy turns out one of the best performances of his career in Rigby, playing a conflicted but devoted husband, struggling to accept the notion of how to live without his wife, and all the while keeping up an almost perfect upper-class New York accent. He also turns to a parent for shelter, living in his restaurateur dad’s apartment. Spending the beginning of the film living out the spawn of a successful parent cliche, Conor is too proud to ask his dad for help with his restaurant. But by losing Eleanor and the dwindling success of his own restaurant, he finally finds himself capable of turning to his father—with a touching performance from Cirian Hinds in that role.

While the death of the couple’s son precedes all plot action in the film, these moments are contrasted with flashbacks of the couple’s earlier romance, a period filled with blissful, happy, carefree memories. When Conor finally locates his wife—after her family encourages her to isolate herself following the suicide attempt—there is a scene in Eleanor’s classroom when Conor tries to pass a note up to her, a la sixth grade. Conor makes an attempt to be fun and easygoing, whereas Eleanor finds Conor’s levity insulting, considering the magnitude of what has happened. The minute she turns around and sees Conor, Eleanor runs out of the room. It’s at this moment that it becomes clear that their former life together—alluded to with the film’s occasional flashbacks—can never again exist.

In this scene, we also realize what we, the audience members, are missing. The concept for the film has changed radically from Benson’s original script. He first released The Disappearance of Eleanor Rigby a year ago at the 2013 Toronto Film Festival. It was then two films, “Him” and “Her”—one told completely from the perspective of Conor, and the other from Eleanor. But when The Weinstein Company picked it up, it realized that watching two films in a row in a four-hour time frame was not conducive to commercial success. “Them” was its answer—a third installment designed for wide release, with “Him” and “Her” to premiere in art house cinemas next month.

Ultimately, Benson’s film is a story about parents and their children: the way a child can shape you, how he or she grows dependent on you, so do you on him or her, how each shapes the others’ lives in ways unknown to either. And, while the loss of a child is an easy catapult to explore these emotions, Benson navigates this potentially unwieldy material in an incredibly authentic manner. Benson has a gift for storytelling, and The Disappearance of Eleanor Rigby is a film not to be missed.