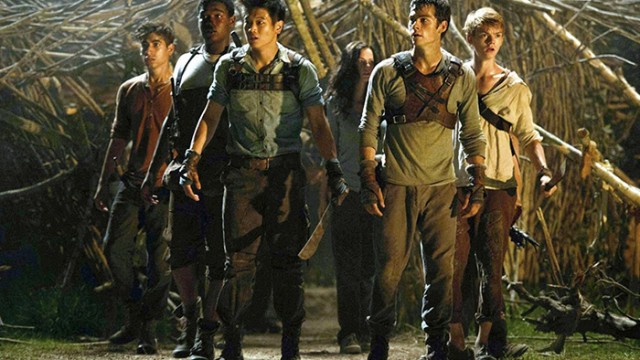 Wes Ball walks in to give his pitch for The Maze Runner. “It’ll be like Lord of the Flies meets Lost.” The studio execs shuffle excitedly. “Will it be like The Hunger Games?” one asks, mouth watering. “Umm, I guess,” Ball answers. And off we’re thrown into the world of The Maze Runner.

That’s the general impression the film gives the viewer. A young crew led by first time director Wes Ball, first time writers, and young budding stars set out to make a good film. Unfortunately, the audience’s expectations are likely to preempt anything this team tries to do with the film. You just can’t get all those damn dystopias out of your head. Ball and company don’t get extra points for being inexperienced—but then again, a more professional, more “Hollywood” version of this film might have been intolerable. We’ve just seen it before—boys left to fend for themselves, the outside world in total chaos.

It’s a shame, because The Maze Runner has a frenetic energy, is well paced, and actually infuses some heart into this quickly decaying dystopian genre. The film follows a group of boys living within a “maze.” They’ve carved out a sufficient lifestyle and have established order in the glades that lie at the center of the maze. Thomas (Dylan O’Brien) emerges without his memory and amid much exposition joins a band of brothers who have gathered together in sterling self-sufficiency. But Thomas doesn’t want to stay in the glade, scraping out a scavaging existence. He’s curious, and that’s dangerous for the group. The maze isn’t safe. There are things out there in the night.

The film falls into an episodic pattern of basically search and destroy. Thomas and some of the crew go through a bit of action, before Thomas returns to search for what has gone wrong. This surely upsets the dynamic within this fragile band of lost boys, and Thomas soon faces dangers from outside and within. The plot is further thickened when (gasp!) a girl emerges from the tunnel. She seems to know Thomas, because he’s the main character and because they seem to share some secret past. The film progresses evenly and intensely.

The film wouldn’t work as well without O’Brien. No one runs and falls quite like O’Brien, who has had his practice on MTV’s Teen Wolf and the feature film The First Time, which is about exactly what you think it’s about. Given that most of the action involves throttling through the maze and around corners, O’Brien puts those talents to task, and his flailing limbs in midseason form. He’s in nearly every shot. He carries us through confusion, disorientation, curiosity, and action. He doesn’t say much, but it’s him we watch throughout the film. The surrounding cast is equally engaging. Thomas Brody-Sangster (the kid from Love Actually and Game of Thrones) quickly asserts himself as a voice of measured reason, probably because of his accent.

Aml Ameen (Lee Daniels’ The Butler) plays the band’s leader Alby with a powerful physical presence. Kaya Scodelario depicts the film’s lone girl with a sufficient amount of “girlness.” She’s not asked to do much. She advances the plot and introduces a new dilemma, and then, one of the film’s best scenes involves her and O’Brien’s Thomas as they try to sift through the absurdity of their situation.

One thing that separates this dystopian genre from its vampire past and superhero cousin is just how uncomfortable much of it is. There’s not much room for humor when you’re fighting and clawing for the right to live free. And The Maze Runner follows suit. Ball’s camera remains unsteady throughout most of the film. It’s not “found film” unsteady, but it’s jittery, waiting for the next catastrophe to hit. This puts us on edge, which also heightens the action.

Ultimately, it’s hard to talk about The Maze Runner without talking about everything that came before it. It’s not as epic as The Hunger Games. It’s not as frustratingly weird as Lost. It’s a group of dudes trying to get through a maze. Considering the way the film’s set up, they could conceivably sit in that maze forever, which would make for a boring, endless film, but they don’t. They venture into the wild, inhabited by bio robotic scorpions, in search of home—a place where you can wear something other than a tattered, long sleeved Henley. The Maze Runner isn’t overpowered by “the system.” It focuses on the boys, how they interact, and how they’re heroic. This is the best part about a genre takeover—the smaller movie that gets the small things right.