Whether it is containing the spread of Ebola or combating economic crises, international organizations could play a critical role in solving society’s greatest difficulties, but instead often force countries to face them alone, said George Papandreou, former prime minister of Greece, at Boston College yesterday afternoon in Robsham Theater, as a speaker in the Winston Center on Leadership and Ethics’ Clough Colloquium.

The son and grandson of Greek prime ministers, Papandreou drew on his experience of leading Greece through “the center of the financial and economic storm” between 2009 and 2011 to provide perspective on global governance, collective responsibility in the face of crisis, and the role of institutions in creating necessary change in a society. When he took over as prime minister in the fall of 2009 at the helm of the PASOK, the social-democratic left-of-center party in Greece, Papandreou found that the government was in a much worse financial state than his predecessor had publicly proclaimed.

“Just a few days earlier, the previous conservative government had just announced that the deficit was 6 percent,” he said. “When I took office I was stunned, angry to discover that we were already sinking. The actual figure of the deficit was over 15 percent. For Greece, it was a moment of truth. For me, it was a critical test of my leadership. My option was full transparency—to come clean about the Greek situation. Honesty, no matter how painful, was the only way to show all that we were ready to change.”

The response that Papandreou received from other European heads of government, however, was not what he expected. With financial markets in turmoil, other leaders approached the Greek situation not with support, but with trepidation, afraid of what it might mean for their own countries. Looking for assistance in righting the Greek ship of state, he was told—by German Chancellor Angela Merkel and others—that it was Greece’s responsibility to solve its problems.

“The crisis revealed the interdependence and flaws of the Eurozone governance structures, but even more so, the close interrelationship of the global economy,” he said.

Looking at the beginning of the Ebola epidemic, Papandreou said that he found a similar lack of collective interest in solving what has developed into a global health crisis and flawed governance structures—in this case, the World Health Organization (WHO).

“In responding to epidemics, it calls for countries to wage their own battles, with the WHO giving only technical advice,” he said. “To deal with our problem in the European Union, or the world, we needed cooperative, collective responses.”

Without European assistance, Papandreou described the country as isolated and facing an unraveling. In trying to resolve the crisis, he found underlying structural issues that inhibited the proper functioning of the institutions of governance. These were problems that needed time to fix, time that the financial markets were unwilling to give him, he said.

The main focus of the troika—representatives from the EU, the International Monetary Fund (IMF), and the European Central Bank (ECB)—however, was primarily budget cuts and not the necessary changes, he said. Although the numbers were the easiest with which to work, Papandreou said that they were the least effective. The most difficult, and most necessary, change was in the minds of Greeks across the nation.

Working to solve the revenue side of the government’s problem, he cited “imaginative methods” that his government employed to collect taxes. When few citizens registered their swimming pools after the government instituted a luxury tax on them, the Greek government used Google Earth to find all of the pools in the country.

Facing the future, Papandreou said that there were industries in which Greece was positioned to grow economically, such as tourism, agriculture, wellness services, and renewable energy.

Instead of seeking isolation by running away from the problems of the world—issues such as inequality, public health, and corruption—countries must face them collectively. In the long run, the goal, he said, is to “integrate societies into global communities.”

“No one is an island,” he said. “We are all in this together. More and more, your problem is mine and my problem is yours.” 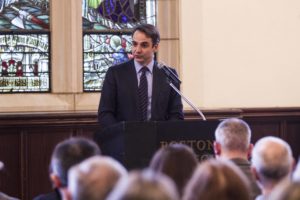