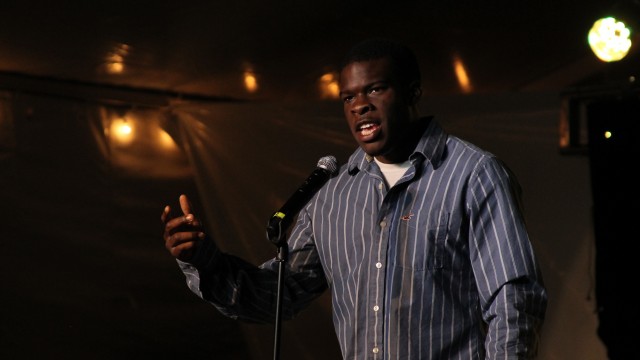 “It’s a protest genre. It was made from kids who had nothing in the 70s, and it was a voice to the voiceless. It was art, it was poetry.”

It’s not out of the ordinary for a 13-year-old to fashion a rapper name. What is more uncommon is for it to stick. For rapper Daniel Imahiyerobo, A&S ’15, “Apex 13” stuck.

“Apex is just the zenith, the highest point of anything,” said Imahiyerobo. “When I was 13, I thought I was the s—t, the highest. Now I guess it’s more of a standard that I would try to hold myself to: to being out my own personal best each time I’m writing or performing something.”

The 13 came from his age, and his 13-year-old insistence to make it a lucky number. He will still answer to Apex 13, with a bit of a shrug and a knowing grin.

“It is my name,” Imahiyerobo admitted. “I haven’t thought of another one.”

It’s the name he coined all the way back in eighth grade when he and two friends from middle school first forged the rap group “The Blackhearted.” The group has remained in contact and produced music together over the past eight years, from high school in Boston to their separate lives in college. Boston has never been a particular haven for hip hop (despite the success of Mark Walhberg, aka Marky Mark). Boston produces rough and tough actors and its fair share of indie bands, but not the steady stream of rappers to rival New York or Atlanta.

In anticipation for the drop, Imahiyerobo released “Here Comes the Sun,” his second single from the mixtape on Jan. 10. He released an earlier track “Vices” in September as well as an accompanying music video in December. The two tracks represent a striking range from Imahiyerobo.

“In the timeline of singles, ‘Vices’ was actually more of a downbeat song, and so after putting that out I wanted to do something that was more cheery or uplifting in and of itself,” said Imahiyerobo.

He described the mixtape as a “winter album.” And “Vices” reflects that with a dark, driving beat and surging voice from Imahiyerobo. But “Here Comes the Sun” is something different altogether. Imahiyerobo described the track as one of the few uplifting tracks on the album. It has a lighter atmosphere than “Vices” though still tells a painful story—one that insists that things don’t always get worse.

“Here Comes the Sun” is a track that is standing on the shoulders of George Harrison of The Beatles’ original song and, as Imahiyerobo explains, is a deeper reflection on what music, and rap especially, has come to mean for him.

“[The track] was really just a conversation with a friend of mine who was going through a really tough time, and afterward her story just stuck with me,” said Imahiyerobo. “I couldn’t get it out of my head.”

But rap is more than just therapy for Imahiyerobo.

“It’s a protest genre,” said Imahiyerobo. “It was made from kids who had nothing in the 70s, and it was a voice to the voiceless. It was art, it was poetry.”

Imahiyerobo understands the work of process: how a song can transform from empathy to an electronic entry on Soundcloud, how a genre can move through spoken word poetry and 2 Chainz, or even how a name can grow from 13-year-old brashness to a personal standard and dedication to old friends.

Thankfully, Imahiyerobo sees a similar, uplifting trend for arts, the more underground especially, at Boston College. Although ever-present and nearly always entertaining a cappella shows across campus will feature a popular rap verse usually inspiring an echo of “oohs” and “ahhs” across the room, Imahiyerobo admits that artists and their representation on campus have room to grow.

And coming from a community himself, he understands the value of growing a culture not currently vividly present outside of Artsfest.

“[The Blackhearted]  has always felt more a self-contained, insulated thing,” said Imahiyerobo. “We were bringing our own initiative to do things. But that’s always the goal to build the [larger] community.”

He does believe, however, that at BC such a community is still possible and, on its best days, somewhere on the horizon.

“This year I’ve noticed a huge boost in the spoken word community here,” said Imahiyerobo. “They’ve been putting on more events and they’ve been way more popular than I remember them being in years past, so I think we’re getting there. There’s definitely more progress to be made.”