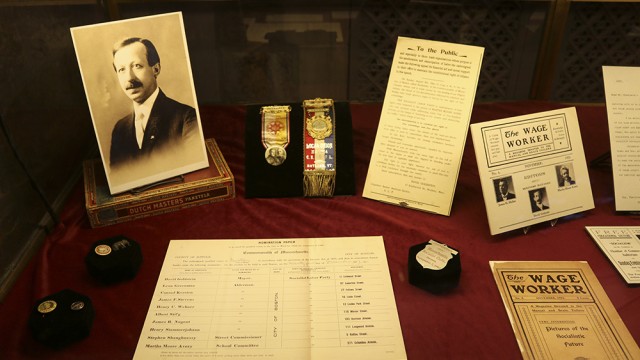 People’s beliefs often change, but how often does a person hear of two proponents of socialism turning to American-style capitalism and staunchly converting to Catholicism along the way?

Showcased in the entrance of the Burns Library, A Common Cause details the stunning philosophical transitions that Catholic advocates David Goldstein and Martha Moore Avery went through in the late nineteenth and early twentieth centuries. These social activists, influenced by their surroundings in the Boston area, helped to fight back Communist ideals and, particularly in the case of Avery, contributed directly to Boston College and its Jesuit mission.

Both born into working-class families, Avery and Goldstein developed their political beliefs at an early age, sympathizing with the plight of the common man and his struggle to get by in a constantly oscillating economic atmosphere. Avery’s grandfather and Goldstein’s parents were especially interested in political activism, as they saw it as the most direct approach to achieving their economic goals. Avery and Goldstein met during their work with the Socialist Labor Party in Boston, where Avery became Goldstein’s mentor and political accomplice. Both ran for office in Boston in 1897, and though neither was successful, they gained quite a bit of publicity. After falling out with the Socialist Labor Party, the two joined the newly made Socialist Party. Interestingly enough, the two left the Socialist Labor Party under suspicion of retaining excessive campaign funds, an action that would stand directly against Socialist foundation ideals.

After the George Herron scandal of 1901, in which Herron, a Socialist Party leader, left his family in favor of a much younger woman than his wife, Avery and Goldstein began to question the motivations of the Socialist party and eventually fell out with the party. Shortly after, Goldstein began to study Catholicism with Joseph H. Rockwell of BC. Although Goldstein had to tackle the idea of disappointing his Jewish parents, he converted to Catholicism in 1905 and became an outright promoter of Catholic principles and ideals. Avery was essential to the formation of the Philomathia Club at BC, an organization that helped raise funds for school projects and athletic programs. They also co-founded the Catholic Truth Guild, which would later become the Catholic Campaigners for Christ. Goldstein published his autobiography, aptly named the Autobiography of a Campaigner for Christ, and lectured across the country and in Canada and Mexico as well.

Although both Avery and Goldstein left the Socialist party and renounced many of its fundamental beliefs, the social activists still worked to support the everyday working-class, founding the Common Cause Society. The two also saw the advantages of the Communist lingo and felt that the Socialist robustness in their speech would help in their newfound mission. Avery and Goldstein continued to lecture on the evils of Communism and, in Avery’s case (strangely enough) the disadvantages of women’s suffrage. Although Avery passed away in 1929, Goldstein brought his fight against Communism into the 1950s, where American fears and trepidations of the power and cause of Communism were greatest. Goldstein passed away in 1958.

The two showcases hold an admirable collection of publications, tickets, pamphlets, and letters to and from Avery and Goldstein. Although it at first appears to be an underwhelming compilation of the two reformers’ works, one quickly recognizes the assortment and significance of the works displayed. From personal bibles as well as Goldstein and Avery’s jointly published, Socialism: The Nation of Fatherless Children to Socialist Party pins and Local Union badges, audiences really notice the intellectual growth these figures went through in their time. Such an alteration in political ideals is only made more apparent by the intensely contrasting media presented to viewers.

Avery and Goldstein’s idealistic transformation was unimaginable in its time, and perhaps even more so today. In the context of the intense partisanship in American politics right now, David Goldstein and Martha Moore Avery’s political alterations serves as a remarkable example of intellectual openness and development. A Common Cause reminds viewers of the power of scholarly cooperation and offers a rare glimpse at the political atmosphere of the early twentieth century.

a common cause
Terrorism Vs. Torture
Ignorance And Dating And Dead Cats