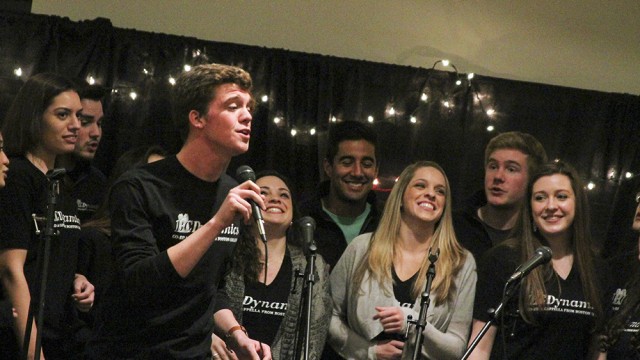 A Cappella And Comedy Shake It Off For The Campus School

Blizzard warnings and snow storms couldn’t keep comedy and a cappella away from the Murray Function Room this Tuesday night. Boston College’s a cappella groups were joined by BC improv comedy troupe My Mother’s Fleabag for the benefit event. Raffle tickets and baked goods were sold at the show to benefit the Campus School, which educates children with multiple or severe disabilities. The eclectic group—comprised of gospel singers and Fleabaggers alike—put on a memorable show of fan favorites and new releases.

Against the Current stayed true to its name in its two-part set. Instead of current chart-toppers or old classics, the group strayed from the pack by including slow ballads and country favorites. Across genres, the group showed off its versatility through songs such as Jacquie Lee’s pop-inspired “Broken Ones,” led by soloist Vivian Lee, A&S ’17. Lee, in her impassioned and expressive vocals, led the group through the rendition of the slow pop ballad. Following suit, Tim Lee, A&S ’17 showed off his vocal chops in country favorite Gavin McGraw’s “I Don’t Want To Be.” Backed by the group’s skillful harmonizing, Against the Current finished strong with a favorite country throwback.

The Acoustics catered to mainstream and underground audiences alike in its repertoire selections. The group opened up the set with the synthpop band Chvrches’ “The Mother We Share.” Even without Chvrches’ distinctive synthesizers and samplers, soloist Julie Gill, CSON ’17, did the song justice while background beatboxing simulated electro-pop sound. Gill turned the stage over to Taylor Maclead, A&S ’15, whose faithful rendition of James Morrison’s “The Pieces Don’t Fit Anymore” evoked the English songwriter’s characteristic soulful croon. The group then ended their set with a new debut song—Mark Ronson’s “Uptown Funk.” Alex Rougeau, A&S ’18 and Olivia Lynch, A&S ’17, performed the first verses of the song, showcasing Ronson’s artful blend of ’80s funk and R&B before handing the reins over to Alex Cavanaugh, CSOM ’17 and Ben Seo, LSOE ’16. Garett Little, A&S ’15, closed the set with the song’s namesake and distinctive bridge.

In an interlude from music and a cappella, My Mother’s Fleabag took the stage. Celebrated for its fusion of audience participation and comedy, the improv troupe led the crowd into games such as “Growing Shrinking Machine,” “My Movie,” and “Moves and Shakers.” Members Sara Elzeni, A&S ’18, Caitrin Assaf, A&S ’18, and Amanda Hoffman, A&S ‘17, inspired skits involving gluten free supermarkets, jazzy stew, and an old woman with a drinking problem. Meanwhile, Jenna Postiglione, A&S ’17, and Alex Dzialo, A&S ’15, were quite literally moved by the audience as one volunteer controlled their arms and legs in “Movers and Shakers,” depicting igloo-building and alligator skits to the crowd’s delight.

BC’s only all-girl group is known for its strong vocals and belting out mashups and in this case, the Sharps did not fail to deliver. Starting off with MKTO’s “Classic,” Sherri Cheng, CSOM ’18, led the group into a mash-up of the Jackson 5’s “I Want You Back.” Cheng matched the upbeat pop performance of MKTO with the R&B stylings of the Jackson clan. Jennifer Dwyer, CSOM ’15, finished off the set with OneRepublic’s “I Lived.” Sustaining the band’s pop rock energy and meaningful lyricism, Dwyer’s impressive vocals and faithful execution of the song finished the set on a strong note.

Following the Sharps was BC’s only gospel choir, Voices of Imani. Director David Altenor, BC ’09, led the choir into a cover of Sister Act’s “If You Wanna Be Somebody,” sung by soloist Kyrie Olsen, A&S ’17. The group’s spiritual renditions of American gospel music initiated audience participation as the crowd swayed and clapped along to Eddie Hawkin’s “Oh Happy Days.” Voices of Imani then ended their three-piece set with the American spiritual “Go Down Moses,” led by Bria Coleman, A&S ’15. Members of the large ensemble dispersed into the crowd, chanting and clapping into the song’s finale as audience members leapt up to their feet to join in.

The Bostonians, BC’s original a cappella group, started off the last set of the night with Sam Smith’s soul-inspired “Not The Only One,” performed by Ben Stevens, CSOM ’17. Cheered on by the audience, Stevens matched the raw intensity and R&B influence of Smith’s vocals. The group then transitioned into a classic rock staple—Billy Joel’s “Vienna.” Led by soloist Liam Maguire, A&S ‘17, the group performed a smooth rendition of Joel’s ballad without a hitch.

There’s no better way to close off a show than with a crowd pleaser, and with Taylor Swift, it’s always a safe bet. Chloe Mansour, LSOE ‘17, pumped up the crowd with Swift’s “Shake It Off.” Mansour displayed her impressive vocal range and put a unique spin on Swift’s summer pop anthem.

the acoustics voices of imani my mothers fleabag bostonians BC dynamics a capella
Kevin Breel Addresses Mental Health Stigmas For Be Conscious Initiative
Oh, The Places Tech Shall Go 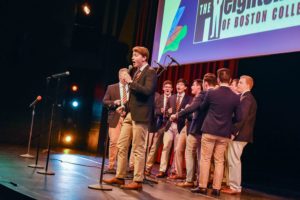