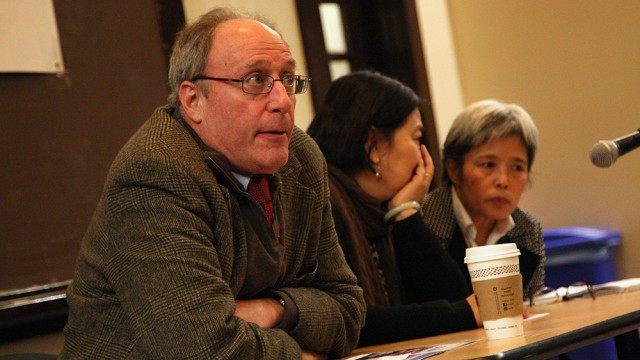 The people of China have a very tenuous relationship with their government. The government will often refuse to listen to the needs of the people, and individuals and communities often go unheard when they bring their hardships to the attention of their government.

Song Qinghua sought to fix the relationship between the Chinese people and their government, bridging the gap between politics and the needs of society. Her non-governmental organization, Shining Stone Community Action (SSCA), is designed to train the Chinese people to become more involved in the public decision-making process.

Qinghua spoke to a small assembly of students in Gasson 305 on Feb. 3 at an event hosted by the Chinese Students Association of Boston College and professor of political science Robert Ross. Since Qinghua only speaks Chinese, a translator was present at the lecture.

The first and most important foundation that Qinghua laid for the lecture was her definition of governance, saying that good governance was simply good management. She went on to explain that good governance involves the government’s involvement in public welfare, as well as its need to be transparent with—and accountable for—its actions.

SSCA focuses on three distinct goals when interacting with the people and the government. Qinghua said that getting the participation of the people within public decision is the most important part of what SSCA does because it is the foundation of its mission. She also said that there is a heavy focus on improving the organization’s relationship with the government and establishing a greater level of cooperation. Additionally, Qinghua hopes to compile a collection of case studies that SSCA can publish to further educate the public.

Much of the lecture was centered around a case study that Qinghua shared that showed the success SSCA has had bridging the gap between the government and the people. The case study described a community full of older citizens who continually brought their issues to the government but received no help because the government didn’t consider many of their issues as being of consequence. Qinghua said that the people were interested in fixing their problems but claimed that they were too old to do anything useful.

Qinghua sat down the people in the community and asked them to present their problems and how they affected the community. Once the problems were out in the open, she asked them to brainstorm potential solutions without factoring in possible road-blocks, such as their age. Through this exercise, the group discovered that one of their largest problems was their inability to get rid of trash, so they set up a timeline for how the trash would be removed, and SSCA worked with the government to get transportation provided so the trash could satisfactorily be removed.

Qinghua said that the success of this project brought hope to the group and that when they sat down to think about their problems, they were often able to find the solutions.

The community was so encouraged that they decided to form a small, self-governing board that would continue to push whatever agenda the community decided upon. After the elections, Qinghua said that she was slightly surprised when the board consisted of the people who were most pessimistic about the idea in the beginning.

SSCA, headquartered in Beijing, currently has 20 employees in three cities. Questions were raised as to whether they should expand to other major cities around the country, but Qinghua believes that their efforts and money are better spent training individuals and communities to help themselves as they did in her case study.

Having trained around 60,000 people to become more involved with the Chinese government, Qinghua and SSCA plan to continue to grow their initiative.

Qinghua says that although things move very slowly, she is confident that they will be able to continue to spread their ideology through both the Internet and additional training programs

chinese students association of boston college
For Students With Disabilities, A Newly Created Advocacy Group
At BC, A February Push For Sustainability