Home » Prejudice At The American University 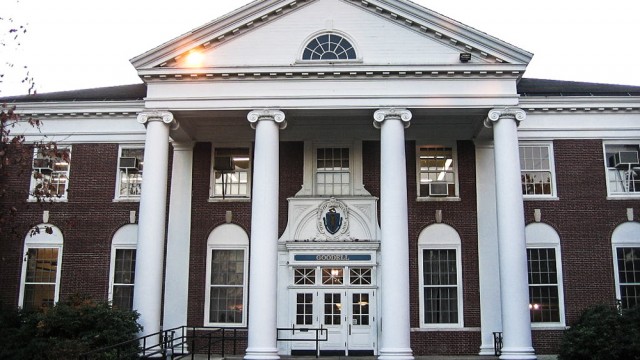 Prejudice At The American University

As snow gradually blocked any light from entering my first-floor window this past week, and icicles hung perfectly poised to impale anyone just a little too slow swiping into the dorm, I found my mind drifting to warmer climes.

Specifically, to Iran, whose aspiring scientists and engineers were subject to a short-lived—and baffling—ban from the University of Massachusetts Amherst.

The Boston Globe reported on Friday that the UMass administration had stopped admitting Iranian nationals into certain graduate programs, from chemical, electrical, and mechanical engineering, to physics, chemistry, and microbiology.

According to a UMass spokesman, as quoted in a MassLive.com article, the policy was merely written acknowledgment that the school abides by a 2012 federal law declaring Iranian nationals ineligible for U.S. visas if they seek careers related to nuclear power or in Iran’s energy sector. Another administrator explained that when an admitted student is denied entrance to the U.S., it could cause delays and hurt funding.

The logic, then, was that barring Iranians from applying to any loosely related fields at the outset would prevent future strife. But as far as preemptive strikes go, UMass’ move was more like a … well, an intercontinental ballistic missile. The parameters were far broader than the original law’s, making a greater number of programs verboten, and threatening to affect students who wanted nothing to do with nuclear energy. Like Amir Azadi, interviewed by The Globe—a doctoral student in theoretical physics “who studies the formation of crystalline structures, such as snowflakes.” Oh, right, those terrifying, nuclear … snowflakes. Unless Azadi masterminded the recent spate of snowstorms (give us back regular T service!), it’s hard to see his studies as a potential menace.

Fortunately for everyone (except, perhaps, for columnists working themselves into fits of righteous indignation), UMass had a change of heart yesterday. After irate objections from UMass’s Iranian Graduate Students Association, the National Iranian American Council, and others, the school announced that it would lift the ban and work instead to “create individual study plans for affected students,” according to The Globe.

That’s great—but there’s no acknowledgment from the school that it was trying to exclude people based on generalizations, and there’s no acknowledgment that it was wrong. Here’s the thing: universities with these policies only ever lose. Pick any marginalized group, any nationality, and you have within that cluster an untold number of people whose presence is enriching. (Enriching the collegiate experience, that is. Not uranium.)

Sitting in a packed Gasson 100 last Wednesday, listening to the graphic novelist Alison Bechdel speak about her work, I had a similar thought about acceptance in academia. Bechdel is not the first or, arguably, the most notable GLBTQ luminary to visit Boston College this semester; actor and activist George Takei addressed a large crowd in Robsham Theater in January. Students in the Asian Caucus hosted Takei, though while Bechdel was invited through the Lowell Humanities Series, one of BC’s most-touted lecture programs.

So I don’t doubt that Bechdel’s work, and indeed her presence, was offensive to some. A subset likely sees her as harmful to Jesuit, Catholic values, and the notion of inviting her may well have led to some unpleasant conversations behind closed doors.

Yet there she was, giving a succinct, delightful presentation to an appreciative audience.

Okay, the comparison’s hardly perfect. The U.S. government and the Catholic Church are (need it even be said?) very different sources of authority. Iranian grad students and GLBTQ activists generally are fairly disparate interest groups. And most who decry homosexuality these days have ditched the apocalyptic talk, whereas there’s real concern about Iran’s nuclear capability and its world-ending potential.

But assuming that all Iranian engineers are out to build nukes, an interpretation UMass seemed to be allowing for, is as nonsensical as assuming that all members of the GLBTQ community want to destroy the sanctity of the Church. Maybe a few do—anything’s possible—but a blanket ban is overkill, and violates the very purpose of a university: to bring dissimilar people together in the pursuit of knowledge.

UMass’ statements throughout this drama have been limply apologetic. It’s abdicated responsibility, protesting that the original policy went against the school’s values and painting its reversal as a surprising victory. (“Yes, Your Honor, we were institutionalizing prejudice, but we didn’t really want to….”)

This move, blaming an outside authority for a school’s distasteful acts, is a cop-out. Like, oh, I don’t know, when BC cited conflicts with Church teachings as a reason to cancel a GLC-sponsored dance in 2005.

So to round off the lopsided analogy, our university wasn’t always welcoming to people like Bechdel. In some ways—despite recent strides like the GLC-driven Support Love campaign—it’s still not. That’s an issue unto itself. But by and large, BC’s doing the right thing and trending toward tolerance. This month, UMass tried to sidle in the other direction.

The arc of the moral universe (aided by a healthy dose of public shaming) bent toward justice pretty quickly this time. Was it all a big misunderstanding? Maybe—but it looked an awful lot like a school taking shortcuts by sacrificing an individual’s right to be judged on his or her own merits. And if institutes of higher education stop honoring that right, we may as well remain a barren, snowy wasteland forever.