Home » LTE: Letter From Climate Justice At BC Community To Jack Dunn 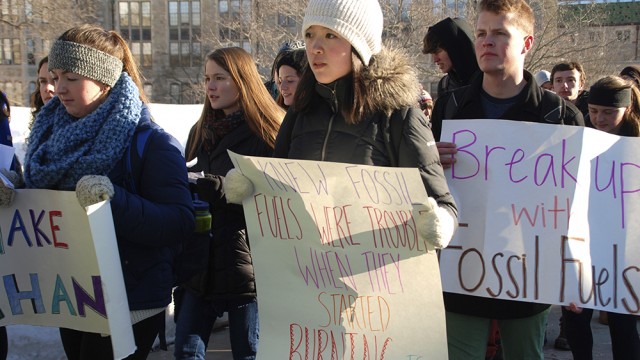 LTE: Letter From Climate Justice At BC Community To Jack Dunn

We as Climate Justice at Boston College are writing to respond to the aftermath of the Breaking Climate Silence vigil, held on Feb. 13th. Forty-five of us held signs requesting BC to divest from using fossil fuels. We marched and sang songs to the theme of breaking up with fossil fuels. We urged BC to end their toxic investment relationship with fossil fuel companies.

University spokesperson Jack Dunn’s response to our call for divestment at the vigil was ill-informed and contradictory to BC’s own investment guidelines. He stated that, “it seems like the notion of divestment is just a very convenient way to absolve ourselves of our own responsibilities. ‘If the oil companies just divest the problem goes away’… That’s not true—the best way we can effect change is to commit ourselves individually.” While reducing one’s carbon footprint does help the cause, we need to take collective action to meet the crisis. Fossil fuel companies must leave four-fifths of their proven reserves in the ground if we are to have a future hospitable to human civilization. Divestment calls attention to this fact when we talk of the “carbon bubble.” At $27 trillion, it will make the housing bubble look small.

Furthermore, the administration’s response is contradictory to BC’s own endowment webpage. Dunn is summarized as saying in a recent Heights article that BC’s position is that the endowment exists to provide revenue for University initiatives and to serve its academics. He noted that it is not in place to serve any particular social justice mission. While it is admirable that BC cares so much about serving academics and University initiatives, this statement contradicts precisely what BC claims to stand for. Recorded on the BC endowment webpage is, “In the management of its investments, BC reflects the ethical, social, and moral principles inherent in its mission and heritage. In particular, the University is firmly committed to the promotion of the dignity of the individual, personal freedom, and social justice.” The University apparently is firmly committed to promoting social justice with its investments, yet they fail to address the most important issue in the world today. University administrators also noted that they admire our passion for the issue of climate change. While that is kind of them, we do not want to be patronized or seen as admirable; we want to be seen as youth­—the young people who are the victims of an intergenerational injustice—fighting for a chance at the same adulthood, the same future, that they were fortunate to have.

Dunn claims that the administration does “not want to see [BC’s endowment] used as a political wedge,” however, this inaction is just as significant of a political stance as divestment. BC has a fine history of pioneering social justice movements in accordance with its motto, “Men and Women for Others.” In the spring of 1985, BC made the decision to divest from any “companies which [sic] do business in South Africa.” This choice, along with similar decisions made by other institutions, helped stigmatize businesses associated with the South African apartheid system, and in turn the South African government itself. Nelson Mandela credited the divestment campaign in the United States as an indispensable factor in pushing Congress’ 1986 economic sanctions bill, which in turn was a “key factor in the eventual victory.” Had institutions stood by idly, retaining the status quo of their investments in the name of noninvolvement in politics, would there have been such a significant change?

Fortunately, we will never know because universities responded to student calls for divestment from apartheid.

Currently, by choosing to not divest, the administration is using the University’s endowment as both a financial mechanism and a policy statement in support of fossil fuel companies. In our protest, we asked BC to pick a side, they chose to support the fossil fuel industry. How will BC live with its current active decision of inactivity when the inevitable devastation of climate change seizes the planet? Apathy is an administrative stance that we as students of BC cannot accept. If our institution truly upholds social justice in this world, then it is our duty to utilize our endowment to reflect our professed mission.

We call upon BC to make the right decision. We must withdraw from fossil fuel violence. We have the opportunity to lead a new and important movement. Do we want to be remembered as those who strove for a better world, or those who let it burn?

Climate Justice at BC

3 COMMENTS ON THIS POST To “LTE: Letter From Climate Justice At BC Community To Jack Dunn”