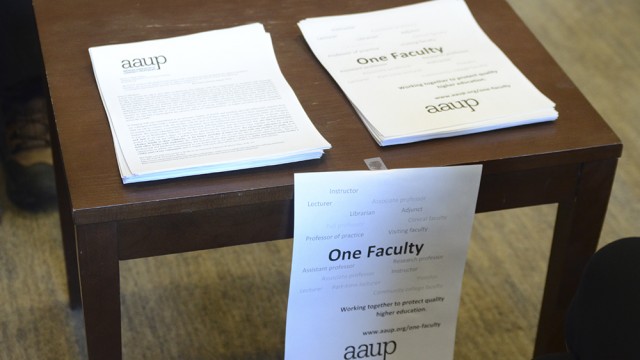 BC Adjunct Professors Gather In Solidarity

On Wednesday, members of the faculty gathered in the Chocolate Bar in Stokes Hall to raise awareness about the differences between tenured and nontenured faculty members. Both groups were present at the “walk-in,” which was hosted as a part of the first-ever National Adjunct Day of Action.

Seventy-five percent of faculty at colleges and universities across the country are adjunct faculty, according to National Public Radio. Adjunct faculty, unlike tenured faculty, are hired on a course-by-course basis or on a multiyear contract, rather than being hired until retirement, like tenured faculty. The number of adjuncts at Boston College is unknown, because the University classifies its professors as full-time or part-time, rather than tenured or adjunct. Adjunct professors, for example, are referred to as “professors of the practice.”

Though the quality of teaching from adjunct professors is comparable to that of tenured faculty, outside factors inevitably make it harder for adjuncts to do their jobs. Part-time adjunct faculty members tend to teach a few courses at multiple college campuses, which means they have more students and less time for research.

As one participant in the walk-in pointed out, BC faculty seem hesitant to come together and speak up. As the adjunct movement gains speed, many professors have formed unions. BC, however, has not yet formed one. Nor does it have a faculty senate.

The professors who participated in the walk-in on Wednesday ought to be commended for taking a stand on an issue that affects them and many others every day.

Wednesday’s demonstration by the faculty continues dialogue about social change that is needed in the BC community.

Members of the faculty gathered in Stokes to show that they stand in solidarity with each other, and with adjunct faculty across the country. Their goal is to create a cultural shift in how adjuncts are viewed, treated, paid, hired, and fired is admirable. Moreover, the effects of this goal will be felt by students as well.

Adjuncts have less freedom in their teaching because they are under constant threat of being fired. They are also constantly on the hunt for a new job—when an adjunct is hired course by course, it is difficult to invest oneself into a position without knowing if they will hold that same position next semester.

A cultural shift is clearly necessary in order to ensure greater job stability and better financial security for professors with Ph.D.’s who have worked in the field for decades. The adjunct problem is a symptom, however, of a greater problem of extreme competition for students in higher education, as well as the necessity of cutting back expenditures in the deflated economy.

Taking a stand to try to combat this culture, however, is an admirable first step by the BC faculty to ameliorating the problem at the University and, eventually, on a  broader scale.