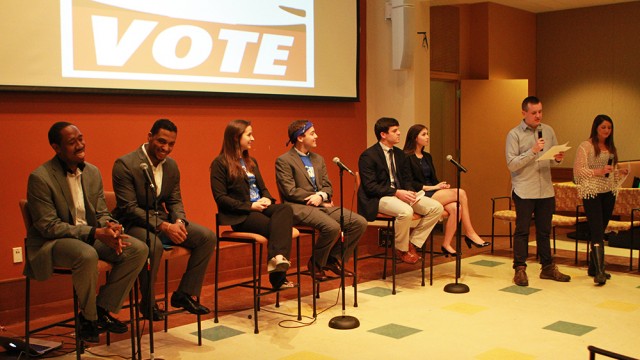 This impartial committee, tasked with enforcing fair UGBC elections and providing relevant information to students on these elections, has failed in offering consistent, timely information to students through their website and social media channels this election season. A Facebook announcement of a winner came over an hour after an initial announcement, which was delivered to the winning team behind closed doors. An email notification of the results has yet to be sent.

The vote count—which was offered to campaign officials for the team of Thomas Napoli, A&S ’16, and Olivia Hussey, A&S ’17, on Friday night—was promised to be made publicly available by the Elections Committee on Monday. It did not come until Tuesday, well after preliminary totals given to the Napoli campaign had been published by several campus publications, including The Heights.

In national elections, votes are made publicly available as soon as they come in from various polling locations—and before polls in other parts of the country are actually closed.

If the results are to be announced to campaign teams behind closed doors, they should simultaneously be broadcasted to all students, and with those results should be the same vote count offered to the campaign teams.

Also notable is the fact that throughout this campaign season, the Elections Committee’s Facebook page directed students to an inactive OrgSync page that had not been updated since 2013, and on it were several dead links to important forms for filing complaints and stating intent to run for office.

The Elections Committee did an exceptional job this year in enforcing clean campaigns, and in light of the extenuating weather circumstances, it was wise in postponing the elections to give students ample opportunity to attend the debates and learn about the candidates. The availability of information and the inclusion of voters in important announcements, however, is paramount to successfully managing any election. Each of these informational errors and delays would seem trivial in itself, but for a committee given the job of enforcing transparency in UGBC campaigns, it is not unreasonable to expect some degree of clarity in communication on the elections.

UGBC elections committee
BC Adjunct Professors Gather In Solidarity
Rihanna Empowers In ‘Towards The Sun,’ Big Sean, And More Singles This Week