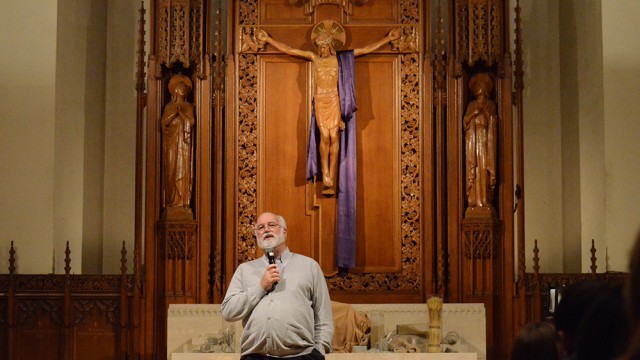 Achieving Kinship By Helping The Marginalized

Affectionately referred to as “Father G,” Rev. Gregory Boyle, S.J., spoke at Boston College on Wednesday night before a standing room only crowd in St. Ignatius church—his lecture was the keynote for BC Campus Ministry’s “F.A.S.T. Week.” Boyle is best known as the founder and director of Homeboy Industries, a Los Angeles-based organization founded in 1992 to assist former gang members with rehabilitation and reentry into the workforce. Boyle is also well known for his 2010 publication Tattoos on the Heart: The Power of Boundless Compassion, which recalls the powerful victories and the tragic losses he has experienced in his years with the Dolores Mission in the crime-ridden Boyle Heights neighborhood of Los Angeles, as well as at Homeboy Industries.

Boyle’s talk produced a similar range of emotions on Wednesday night, as he shared a variety of stories from his experiences in “the barrio” and his gang rehabilitation program. In light of the recent spring break service trips, he offered his thoughts on service as a pillar at BC and a key to finding humanness and kinship.

“I think there are a bunch of things around BC that put a large amount of focus on service,” Boyle said. “Service is always the starting point—nobody wants to end there because the goal of service is kinship. You want to get to the place of connection and exquisite mutuality.”

Continuing with this concept of kinship, Boyle explained the idea of “standing on the margins and watching them disappear,” rather than passively serving from the “center point” at which one might begin. The mission of Homeboy Industries heavily subscribes to this sentiment, coming from a place of love and togetherness and using a sense of community as a tool to rehabilitate.

“Part of the task at Homeboy Industries is to reach in and dismantle the messages of shame and disgrace that get in the way that keep people from seeing that love,” he said. “If love is the answer, community is the context and tenderness is the methodology.”

Speaking largely from experience with the “homies,” or the ex-gang affiliated individuals who comprise Homeboy Industries, Boyle shared stories describing the successes and failures of his work. Throughout his lecture, he stressed the founding idea at Homeboy Industries of kinship through service and “standing at the margins.”

“Go to the other shore where it is messy—the place that the world deems unworthy, the margins,” Boyle said. “Stand looking there, you brace yourself against the fact that the world will accuse you of wasting your time. But in this place in which you say, ‘It is waste,’ there will be heard again the voice of gladness, the voices of those who sing. BC is not the place you come to, it is always the place that you come from.”

To conclude, Boyle left the audience with a simple message about embracing one another and honoring the importance of love in the context of kinship. “Unaltered love will in the end triumph,” he said.