Home » My Weekend In Odds Hell 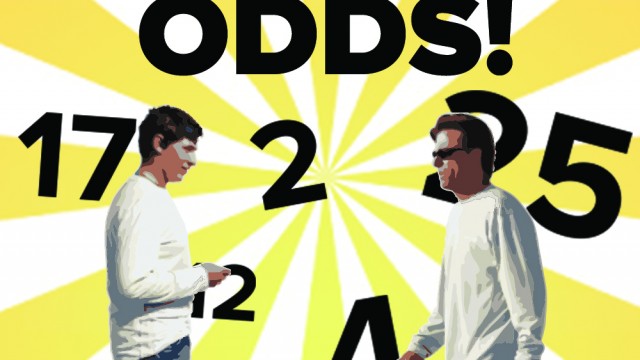 My Weekend In Odds Hell

For the three percent of you unfamiliar with the game of Odds, it’s a simple game.

The Oddser picks a task, The Oddsee picks the numeric odds he does said task, and, on the count of three, if they say the same number between 1 and the Oddsee’s odds number then the Oddsee must perform said task. There’s little more to it than that, an excuse for hijinks and getting drunk faster. But when Odds finally comes to your friend group, it will come as a handy Sparknotes for the obscure Bulgarian novel your life has been up to this point. Your life, or at least your life on Odds, is legible, intelligible.

The rest of you know what I mean. Odds is the closest thing our nebulous generation has to a code of honor. It’s a chivalrous system in which we can all take part, a millennial bushido that builds friendships, bridges gaps, and gives each of its participants something, anything, to believe in.

Nothing less than a sense of duty to the code and to justice compels you to give “sporting” odds. You may not like the task, it may reduce you to embarrassing lows, but a gentleman’s “dice roll” (a one-in-six) remains the ceiling for most odds, and one-in-15 for the real nasty ones. The “sporting odds” is an intoxicating high, the feeling that you and you alone stand on the precipice of civility and an Oddsless world where no one can be taken at their word. It’s a state our world of today too often resembles. And somewhere, at some archetypal state school, a frat’s pregame time-passer seems to have redeemed the world in the eyes of one generation.

And doing Odds is fun! It keeps everyone on their toes and allows even the most craven and gutless of us (ya boi) to feel mutual pride and honor with your friends.

As soon as that odds-high disappears, though, you sink back into a world where a man’s word is little more than ruffled noise. But is it possible to keep the Odds-high alive, in its purest form, for as long as possible? What follows are the errant notes I was able to take in my (Odds-induced) immersive investigative search for the permanent Odds-high.

For an entire weekend, I would only give one-of-three odds to any odds given to me.

“Odds you buy us this round of drinks.”

“Odds you shower in jeans all weekend.”

“Odds you sleep in the fireplace tonight.”

It’s easy to see why all of my friends are on this new drug craze. This is the jolt our weekends needed. But it soon degenerates into an odds shootout, mostly toward me. The odds are in my favor that they won’t get me, but it becomes apparent over time that they’ve got my number.

When you get oddsed dozens of times, your oddsers start to see your patterns. My social media presence is the first embarrassing domino to fall, and I must now live until mid-April as “Nate Birdman Fisher” on Facebook, with a litany of people well-convinced that I have obnoxious love for a movie I thought was horrid. That hurt worse than all the face-slap odds.

The night ends the way most nights end: distant acquaintances of all sorts getting snapchats I would rather not have sent. At 4:45, I am rudely awoken and reminded that the fireplace is my bed tonight.

Most of Day 2 is spent riding the 86 bus to Somerville and walking back. My back hurts.

It’s all gone blurry now. I’m bearing the brunt of tonight’s shots odds. Fireball shots, cheap gin shots, and shots of undrinkables. I light a fire in Stokes. I throw tiny rocks at adult strangers. I narrowly avoid the Pine-sol shot odds. I do not avoid the vodka-shot-then-chase-a-bus odds.

“Odds you shave half your beard.”

“Odds you jump naked into the snow.”

One of my friends, not one in particular, but a fuzzy amalgam of each of them, pulls something out of his pocket. “Odds you stab the bartender in the back of the neck with these scissors.”

It never feels good to wake up on the dusty wooden floor of an abandoned loft wondering which of your limbs you’ll be able to feel again first. Or to be woken up by Tank(?) holding a pane of glass over your head asking “Odds you drop this pane of glass on your head and roll down the loft stairs … again.”

At the bottom of the stairwell, bruised, bloody, and half-bearded, the word “odds” is as removed and far away as the balanced life I once enjoyed. I hobble home on the 86 bus and take a jean shower.

“Where are you headed?” I ask.

“Oh I’m not going anywhere. I actually have to ride the entire red line today. It sounds silly, but there’s this game we play at Tufts called Odds.”

When you move to a new place or take up a new activity, you experience certain intangible sensations whose nature can only be understood after years of familiarity and repetition. You recall in memory the experience of the thing as you first experienced it, the disharmony between the “then” and “now” of the thing serving as evidence for the lost presence of mystery and discovery. We often chase that mystery; this is particularly true for all things addictive. I recall the Odds high very fondly, so fondly that I hardly notice I’ve told her how exciting my one-in-three odds weekend was, and, without missing a beat, was lead smiling into her innocent “Odds you keep doing it.” I got got.

If you see me, odds me. Keep the Odds high alive.