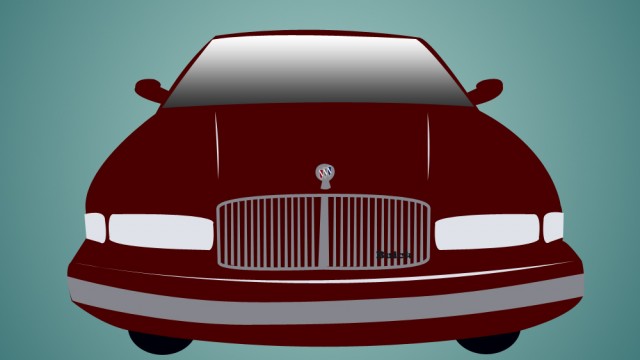 Smoke And Sweat: A Buick Odyssey

In the legendary summer of ‘14, I drove a 1991 Buick Regal. Its majestic, maroon paint glistened in the sun as I cruised James Bond-style down the Wisconsin highways. The shag-carpeted interior smelled of stale smoke and sweat, and a gaping rusty hole stood well over the front wheel. It was truly a car that oozed class and sophistication.

The Buick offered me the freedom of the open road, the ability to go anywhere as long as my parents were willing to fork up the gas money. Sometimes I would even cross the state line: I was essentially a modern-day Kerouac.

One fateful summer day, while listening to “Dancing in the Dark” and cruising down the highway, the brakes went out and I almost slammed violently into an SUV. My nearly superhuman reflexes saved the day and I managed to run the car off the road and onto the lawn of an evangelical church (Pastor Dan still won’t talk to me).

It was then that I knew the Buick’s days were limited. College awaited me and I would have to find a new form of transportation. I shed a tear for the Buick as it was dragged away to a final resting place.

My elegant machine had been left behind and now I was a student at Boston College. No longer would I bask in the silky smooth interior of my own automotive. Now I was stuck facing a new and terrifying challenge. Public transportation, something I had only had to deal with four or five times before in my entire life.

Most of the things I’ve been told about life came from my great-uncle Jerry. Great-Uncle Jerry used to regale me with tales of his experiences in the world, mostly regarding milking Norwegian mountain goats, but many of these stories had to do with public transportation (which is surprisingly similar to milking a Norwegian mountain goat).

“Public transport’s for the weak, Arthur,” he would say, swaying vigorously on a rocking chair. “It’s for those pansies who can’t even milk a Scandinavian mountain goat.”

“My name’s Archer, Great-Uncle Jerry,” I would respond.

Then he would tell me to shut up and fetch him some whiskey and ‘taters. Oh Great-Uncle Jerry, I miss him so.

As you can tell, my experiences with public transportation were slim to none, and going off Great-Uncle Jerry’s ideas, I wasn’t sure what to expect.

At the beginning of my first year in Boston, I took my first steps onto the T. Uncle Jerry’s words rang in my ears. “The streets are lined with feces, Henry, the trains smell of hippie-stank and the buses are coated in dead rats,” he had told me. I didn’t know what would greet me as I stepped onto that green-painted metal tube. What I found was a nearly-empty train car, well-lit and with no discernable “hippie-stank.”

After my first T ride, I realized that real life is considerably more boring and pedestrian than bizarre fictional uncles make it out to be. The train was simple, relatively clean, and got me to where I wanted to go (an artisanal ranch dressing boutique, obviously). It became my lifeline to downtown Boston, a place I visited as a child and have a great attachment to.

I thought I would miss the freedom of my 1991 Buick Regal (R.I.P), but I’ve discovered a strange affinity for the train. Knowing the ins and outs of the system, where to change lines, where to catch the bus to the airport, and more, make me feel increasingly connected to the city. Despite the much-ballyhooed and extremely troublesome faults of the T, I’ve still developed an affection for it that has become directly a part of my love for Boston.

Next week’s column: 19 Worthwhile uses of the word “ballyhoo.”

train
A Last-Minute Guide To A March Madness Bracket
Broccoli Vs. Bacon: The Plight Of The Plant-Based Eater In Boston