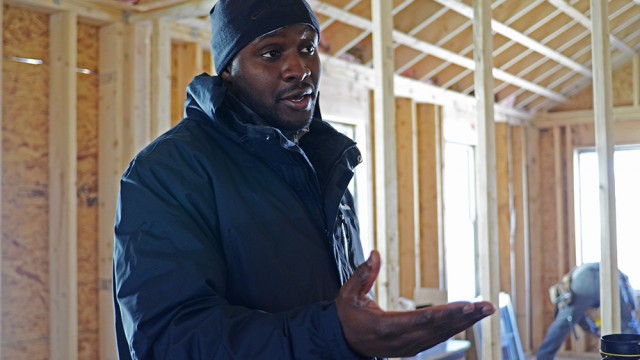 t was another typical, long night.

Ralph Parent, BC ’02, was sitting behind the concierge desk at Boston’s Devonshire Hotel reading Rich Dad Poor Dad, a manual for achieving financial independence through real estate investing and entrepreneurship. On this particular evening, cracking open the book sparked an old childhood memory, a time when he visited the house of a wealthy classmate—only to have to return to his low-income house project in Brookline.

Ever since Parent was 7 years old, he dreamed of owning his own big house. The son of Haitian immigrants dedicated to sending their five children through private schools and college, Parent could only envy his wealthier classmates’ homes. One day, he told himself, he’d have a big house of his own.

Parent is the owner of Rhyno Developments, a new real estate development startup in Boston. He has completed two projects so far, is currently working on two more, and is the only employee aside from independent contractors. He has lofty—yet tangible—goals to grow his business.

He was the youngest of five children growing up in government subsidized housing in Brookline. A successful high school football career led to a scholarship to play safety at Boston College.

Parent chased his dreams of a football career after graduation, trying out for the New York Jets. When he was waived in Aug. 2003, he traveled to play in the NFL Europa league for the Frankfurt Galaxy, playing for a year before quickly returning to the United States. He felt like he had lost his identity.

At BC, he only knew how to be a student and a football player, where he was forced to balance class, office hours, practice, and a social life. In a period during which many students used college to discover what they were passionate about and wanted to do in life, he realized he still did not know what he wanted.

His period of “soul searching” led him through numerous jobs. He was a mortgage salesman at one point, but after closing his first loan of $400,000 to a person with no income and without any asset verification during the subprime bubble, he realized it wasn’t for him. He was a printing salesman. He was an accounting salesman. When he needed some extra cash, he worked at night as a concierge at the Devonshire.

Parent read a lot of books during those long nights as a concierge, especially if they had to do with real estate. Rich Dad Poor Dad was the book that got him seriously thinking about real estate development as a means to prosper financially and gave him his first initial idea to start his own development company.

He got in touch with Meril Diamond, his former Little League baseball coach and a prominent real estate figure in Boston, who had long been his mentor and guided him to start Rhyno Development. While Diamond had no official job openings, Parent said that Diamond allowed him to come to all the meetings and sit in on all the different projects.

In 2013, armed only with his experience from tailing Diamond and a brand new real estate license, Parent took a giant leap and founded Rhyno Developments.

For his first two projects under Rhyno, Parent took two houses that were already built, rehabbed them, and then flipped the properties for a hopeful profit. Rehabbing houses is often more trouble than it is worth, especially if the previous contractors did a mediocre job just to finish the project quickly. Parent found less-than-secure structures, poor drywall installations, and plumbing and electrical issues. These deficiencies are just hidden costs until the house is gutted, and cause contractors to understate their budgets.

His first projects led him to prefer starting from scratch—buying an empty lot, excavating a foundation, and building from the ground up. While he finds this route riskier, it offers him greater control over the design and final outcome.

Parent recently bought two lots on Gleason St. in Dorchester, Mass., a lower-income neighborhood. Each lot will hold a house that is designed to host two families with the standard layout consisting of three bedrooms and two bathrooms in each unit. The upper loft accommodates the owners of the house who tend to rent out the lower floor to another family.

The standard buyers of these houses generally have incomes in the $50,000 to $90,000 range—teachers, firefighters, and policemen are all common residents. These are often the people who cannot afford to live in the city due to high rents and are forced into the suburbs. Economically it makes sense for them to become homeowners. If they find reliable tenants who pay rent on time, the owners are usually only left paying around $600 per month out of pocket, including their utility bills, far less than the $2,000 per month that is common in the city.

One of the biggest real estate issues that Boston faces is the amount of vacant buildings and lots, especially in low-income neighborhoods, Parent said. A lot of families just want somewhere they can feel secure and raise their children. These empty lots are of no use. On Gleason St. alone, there were six empty lots. They are all currently either under construction by Parent or have been finished by other development companies.

From start to finish, a house takes anywhere from five to seven months for Parent’s independent contractors to physically build. Before any building can begin, a developer must go through a lengthy pre-development process to get the proper permits to build. Developers begin to market houses during the framing stage, when the initial bones of the house are erected.

This year, though, the unprecedented snowfall has slowed construction all over the city, and Parent’s first house, which was started in October, has yet to be finished. But it’s nearing April, winter is almost over, and buyers are coming out—housing prices will start to go up, and Parent is confident that he will successfully find buyers.

etting into BC was one of the most difficult things Parent had to do. Even with a football scholarship, he still had an SAT benchmark score he needed to hit, a mark that took several attempts to reach.

Even once he began at BC, the transition to college was difficult. He worked on trying to adjust from high school and having to balance multiple film and training sessions for football on top of his course loads.

He found a safety net in his First Year Writing Seminar. Even 15 years later, Parent can recall how fun Professor Andrea Defusco would make class. Outside of class, however, he remembers her office hours as a chance for him to escape from the outside pressures he faced from football and school. He could unwind and collect his thoughts in office hours and become centered after a stressful day.

“I remember Ralph as being steady, spiritual, cerebral and reflective: his journals and his participation in class were thoughtful and honest, and he remained goal-focused,” Defusco said in an email. “He kept his eyes on the goal, and kept working to be a better student, a better athlete, a better man — Boston College’s credo of ‘Ever to Excel’ permeated all phases of his life.”

he Flat Black Coffee Co. in Dorchester, Mass., across the street from the Ashmont stop on the Red Line, has the traditional coffee shop ambiance—big windows that let in lots of natural light, soft music playing in the background, and a barista that remembers her regular’s orders. It also has free WiFi, which regularly beckons Parent.

There’s no need for a big, flashy office like large development firms have at this early stage in his startup. Parent’s biggest focus is the amount of cash that leaves his pocket. An office would require unnecessary overhead and the only thing he needs to be successful is a phone and an Internet connection, he argues, both of which he has in shops surrounded by scones and the rich aroma of coffee.

“If you want to see my professionalism,” he said, “Just visit one of my construction sites.”

Parent’s family focused on saving money. His parents were not very financially literate but they drilled into his head the path he needed to take: study hard, get a good education, graduate, get a good job, and save. But when he visited his friends from school, their families promoted a more entrepreneurial course. Yes, the education was always going to be important, but Parent realized that by creating his own job, he would be happier.

Part of the reason Parent decided to form his own company stemmed from his desire to be his own boss. He didn’t like working the 9-5 workday, he preferred that his salary was uncapped, and if he had an innovative idea he didn’t want to have to run it by a superior.

“I’m good at taking instruction from people,” Parent said. “But I’m better when I’m able to be on my own and let my wings open up and fly.”

Parent loves rhinoceroses. Despite their short legs, bad lateral movement, and their top-heavy nature, he thinks they’re simply beautiful creatures. If they see something in their line of sight, they’re going to go directly towards it. He sees himself in the rhino and finds himself thinking like a rhino when he is faced with different obstacles.

“We have to be fluid and maneuver around people,” Parent said. “But eventually some issues, you need to take them head on.”

Parent only owns two properties. For now. He wants to buy more and build a diverse portfolio of land around the city, but nothing is guaranteed in this market.

To do this, he will continue to focus on those getting priced out of the city of Boston. He will find the teachers, policemen, and firefighters who can’t afford rent downtown and get them into the two family houses he builds. While he will continue to work solo out of coffeeshops for the time being, he remains optimistic and eventually hopes to have offices and be able to employ hundreds of people.

His goals are lofty and Parent will most likely face some setbacks in the future. All he can do is meet his problems head on—like the rhino.

“I’m still a little minnow in a sea of sharks, but I’m truthful to myself and I know where I am,” Parent said.