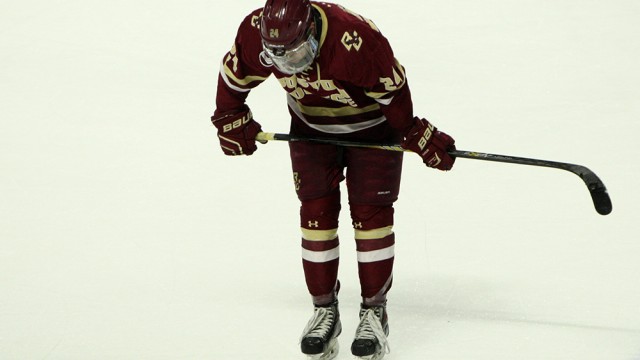 BC Eliminated From NCAA Tournament With First Round Loss To Denver

“It’s always difficult, as a hockey lifer, to say ‘Hey, the season’s over. No practice on Monday.'”

PROVIDENCE, R.I.—The Boston College men’s hockey team lined up for the obligatory handshakes at center ice. As the band despondently played the school’s alma mater, the Eagles looked more than ready to hit the road. Many fans who excitedly packed the Dunkin’ Donuts Center now either held on to give one last salute to their boys or aimed to beat the traffic before the Providence College fans swarmed in for the nightcap. Everyone just wanted to get the hell out of there.

All but Zach Sanford. The forward hung back from the mass of grounded Eagles. He eyed the ice, bent at the waist. He waited, and waited, frozen in his spot. Sanford didn’t move until team captain Mike Matheson came over beside him, patting his back to urge him onward. Finally, after a minute or two, Sanford moved and completed the post-game ritual, before skating into locker room for the final time this season.

It’s no surprise that Sanford seemed broken at the end. The freshman, along with linemates Adam Gilmour and Alex Tuch, had trouble generating the right offensive chances against a tough defense from the University of Denver Pioneers (24-13-2). And now the Eagles (21-14-3) will end their season prematurely after a 5-2 opening round defeat.

A slow start plagued BC in frustrating (albeit predictable) fashion. The Eagles offense struggled mightily, getting off only one shot on goal through the first 10 minutes. Meanwhile, two early penalties, including a high-stick by Michael Sit, led to a bomb from DU’s formidable defenseman Joey LaLeggia over Demko’s right shoulder for an early 1-0 lead.

The Eagles wouldn’t stay down for long, thanks to the captain. Matheson’s shot from right in front of the blue line whizzed past Denver goaltender Tanner Jaillet before he had the chance to find out where the puck was, tying the game at one. For a brief moment, BC regained the momentum.

But then the game fell apart on both sides of the puck. A defensive breakdown with 6.9 seconds left in the first led to a goal by Trevor Moore, his 22nd of the year, giving Denver the hot hand into the first intermission. Throughout the second, BC tried putting on some offensive pressure with little success. On most of their shots, the Eagles went wide with the puck, despite having good angles, and tried to pick corners instead of aiming it at Jaillet and getting a chance off of rebounds.

“We lost the top firepower from last year’s team, and it’s been difficult for us to score goals [this season],” BC head coach Jerry York said. “Goals are hard and don’t come easy.”

And then came the collapse. BC goalie Thatcher Demko allowed a goal to defenseman Will Butcher. Less than a minute later, the Eagles’ defense, looking defeated, allowed Denver captain Grant Arnold to score his first of the season and break open the game to a 4-1 lead. By the time BC’s Ryan Fitzgerald launched the puck past Jaillet with five minutes left, the Pioneers were in complete control.

After the game, both Matheson and swingman Teddy Doherty fought back tears. “I’d say that any time Boston College doesn’t win the national championship it’s not the way we wanted to come into here,” the captain said.

Despite the disappointing finish, there is plenty of reasons for the team to hold their heads high. Both Doherty and Matheson pointed out the adversity the Eagles faced early in the year. Many outside of the team came in with unrealistic expectations that BC could repeat the same offensive attack they had last season, with the “super line” of Johnny Gaudreau, Kevin Hayes, and Bill Arnold.

A four-game losing streak in the season’s first month and a Hockey East laden with formidable foes, like Boston University, changed that perception. But York’s team never gave in, fighting through the challenging conference to earn a tournament bid with a strong January and February. Although the team still struggled to find its way when trying to score, Demko and a powerful squadron of blue liners kept the Eagles in every game, often leading to 1-0 and 2-1 victories.

But in the end, it was the same problem all season long—a lack of offensive firepower—that did the Eagles in, and it’ll be a long summer as York attempts to reload the Eagles for next season.

“Sometimes the puck doesn’t go your way,” Doherty said. “So that’s that.”

jerry york denver mike matheson
‘Get Hard,’ Fleabag, And bOp! In This Weekend In Arts
Who Would Be Your Pick To Replace Zayn Malik In One Direction?