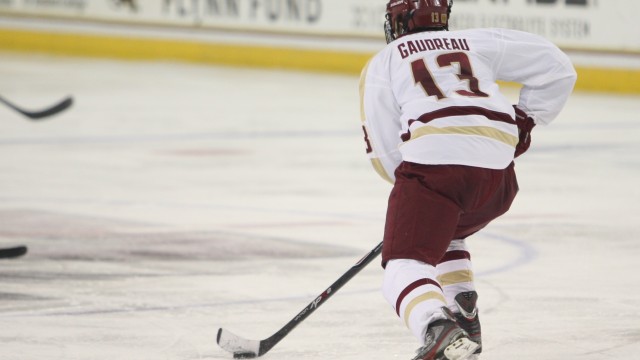 Absent of blaring buzzers, sieve condemnations, and the devilish anthem of that accursed fiddle kid, Conte Forum transforms into a smaller, almost serene place. During a women’s or men’s hockey practice, the arena echoes with the slap of stick on puck, the instructions of coaches and teammates, and the scraping and slicing of skates.

Down on the ice, it can get overwhelmingly silent. I skated around Kelley Rink with a few friends one Saturday morning last year, and I was struck by the intimacy of the usually cavernous arena. Just four of us were on the ice. It was unquestionably the quietest arena I’d ever been in.

But for stretches of time on Saturday afternoon, the Dunkin’ Donuts Center in Providence was a close second. For Boston College men’s hockey, the season ended with a limp struggle and a kick in the head—Michael Matheson was literally kicked in the back of the helmet in the waning seconds in the game—as the Eagles lost 5-2 against Denver, finishing the year 21-14-3. With the exception of a few scattered chants of “Let’s Go Eagles,” complaints to the referees, and cheers after goals, BC’s fans supported the Eagles the same way they had all year: with shrugging, muted enthusiasm.

Thus concludes the most maligned and apathetic year of BC student hockey fandom in recent memory. According to BC, 18 students took advantage of the subsidized ticket package and bus to regionals provided by the University. Others bought full-price tickets and travelled on their own, but regardless, those who made it to Providence weren’t particularly loud—they simply didn’t have the numbers. As BC tried to come back in the third period, the arena was quiet enough to hear (from the press box) a frustrated Matt Gaudreau yell “F—king blow the whistle!” at the ref.

The weak fan presence at games this year has provoked pleas for attendance from head coach Jerry York, indignation from BC Interruption, and uncomprehending anger from alumni. Everyone seems to agree that something has changed for the worse: it now takes a small miracle to get students standing and chanting in Conte’s upper deck—but no one has a definitive answer.

So why do the students (excluding a very devoted, banner-waving vocal minority) just not seem to give a damn?

I think a lack of affection by seniors, for the senior and junior classes, is a huge factor. Two years ago, BC had, by its standards, a relatively mediocre year. Coming off the national championship, BC went 22-12-4 and lost in the regionals (in freakin’ Providence). Yet, down the stretch of that season, those games were packed by fans, and everybody knew the name of captain Pat Mullane. Mullane was a good-but-not-incredible player, but he was the beloved face of that team. Parker Milner, the goaltender who carried BC to its fifth star, struggled throughout 2012’s tournament season, but continued to bask in leftover love. Steven Whitney brought a gritty, goal-scoring edge to the class, and complemented Mullane’s more wholesome image well. Even though Chris Kreider and Tommy Cross were gone, fans still had the golden boy Mullane, the exalted man between the pipes, and the tough-as-hell Whitney.

This year’s group had Gaudreau, but his early departure left the class filled with role players who never transformed into charismatic figures. The junior class has Matheson, but fans constantly oscillate between elation and frustration with the captain. This year’s seniors and juniors are York’s two weakest classes in years, especially compared to the sophomores and freshmen coming up. That’s not to say those guys don’t work hard and have heart. I’m not sure I’ve ever seen anyone give as much on the ice as Quinn Smith. There is a legitimate feeling among seniors, though, that our year was last year, the face of our BC hockey experience was Johnny Gaudreau, and everything pales in comparison.

Senior apathy inevitably trickles down throughout the underclasses—if seniors aren’t leading cheers and getting fired up for games, the younger students will feel that, and act accordingly.

Short of a massive undefeated streak, I don’t think there was anything BC hockey could have done to compensate for the off-ice effects of losing Gaudreau and not having a charismatic maestro to help fill the void. Gaudreau was likely the best hockey player many of us will see in our entire lives. Away from the rink, though, he never showed much charisma. Awkward in front of reporters and cameras, Gaudreau was an interview nightmare, a walking, talking cliche machine, and I can tell you firsthand, he may have been one of the worst public speaking students in the history of BC. But the magic he consistently created on the ice was so spectacularly visceral and intense, so freaking beautiful, that he made us feel like we knew him, like he was ours.

If there’s any merit to this theory, then there’s nothing to worry about for the future of BC hockey fandom. Led by veteran players like Noah Hanifin, Alex Tuch, Thatcher Demko, Ryan Fitzgerald, Adam Gilmour, Steve Santini, Matheson, and Ian McCoshen, BC will contend for a national championship next season, and a new generation of fans will fall in love with this team as its own (assuming they all return). The personalities are already there—Santini is the sheriff, the destroyer of worlds and small forwards. Who knows how long Hanifin will stick around for if he goes third overall in the NHL Draft, but man, that kid could be the archetype of BC. Demko is a dancing, singing goof with the best all-around goalie skills in the country. Fitzgerald has the fanciest hands on the team, and real knack for scoring in high pressure situations. Tuch and McCoshen just sound like they belong in a 1980s sitcom about rogue detectives taking down criminals the old fashioned way—with their fists.

In an ideal world, fans would be better than this. They’d show up for every game, stay for the Alma Mater, and make Conte the most fearsome of road destinations. This isn’t an ideal world, though, and the party has to end sometime.

Take some Advil and tough it out—hangovers don’t last forever.

school spirit
‘Splash’ Invites Creativity In The Classroom
Point / Counterpoint: Was The Basketball Season A Success?

3 COMMENTS ON THIS POST To “The Johnny Hockey Hangover: Reflections On Apathetic Fandom”