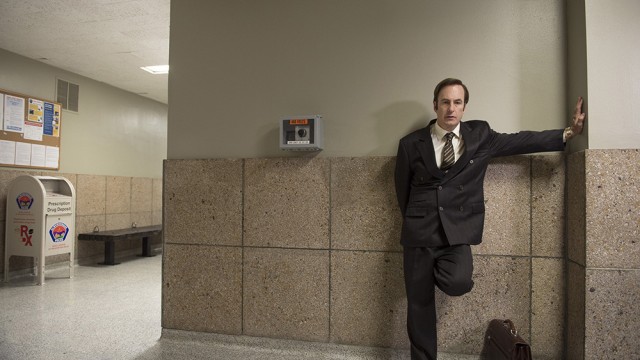 This article may contain spoilers.

Better Call Saul had a lot of hype to live up to as the prequel to one of the most vehemently defended and critically acclaimed television shows of all time (Maybe you heard of it—it’s called Breaking Bad). And for nine episodes, it answered every challenge and allayed every doubt.

Most of this past Monday’s season finale continued the show’s winning streak. Still reeling from his brother Chuck’s betrayal in the last episode, Jimmy McGill has a meltdown in a retirement home while calling out Bingo numbers for elderly clients. He goes back to his hometown of Cicero, Ill. to run a week’s worth of cathartic scams with an old friend named Marco, but things take a turn for the worst when Marco dies of a heart attack, after telling Jimmy that he has had the best week of his life. Jimmy is profoundly affected and returns to Albuquerque. There, he is offered the deal of a lifetime to join in on a huge lawsuit with a big law firm and is about to meet to discuss the details. He plays with the ring on his pinky that once belonged to Marco, and hesitates before entering.

I so desperately wanted the first season of Better Call Saul to end right there. I wanted to see Jimmy McGill, the future criminal lawyer (as in criminal and lawyer) of Breaking Bad, with his fate in the balance, with two seemingly opposite paths laid out in front of him. Instead, Jimmy defiantly turns away from the meeting, away from the upstanding life we have watched him try to find for nine episodes, driving off into the blindingly illicit Albuquerque sunlight to the tune of “Smoke On The Water” (the song Marco was humming just before his death), all but vowing to live a life of criminality.

For a character whose dimensions had been so carefully crafted, who had seemed genuinely well-intentioned albeit misguided, the unequivocality of the decision seemed too hasty to be satisfying, unflattering to the conflicted nature of Jimmy’s heart.

Better Call Saul, like its predecessor, has always been about the slow burn, the subtle processes of long-term transformation. It’s that subtlety that makes these shows feel important. They remind us that people don’t simply choose to be good or bad—immorality comes from the very humanness that exists inside all of us, a composition of decisions and rationalizations that corrode our straightforward narratives of right and wrong.

Most of Better Call Saul seemed to be following that formula. For the whole season, Jimmy floated between two worlds: the criminal world that once ruled Breaking Bad and the world of law and order manifested in his brother Chuck. We always knew Jimmy would end up living in the former—that’s the benefit of the show being a prequel. But we essentially knew where Breaking Bad was going too. Walter had cancer, after all. The enjoyment, for both shows, is in the journey. And to skip to such a defiant admission of failure to pursue the latter, for me, did not do justice to Jimmy’s own desires to follow the straight and narrow that seemed to exist, on some level, independently of Chuck as well.

Perhaps I’m not being fair. After all, “Marco” really was an excellent episode. The Bingo scene was pure genius. Jimmy breaks down after reading five B’s in a row, which prompt him to think of haunting words like “Brother,” and “Betrayal.” In a room full of elderly clients, he shares the story of how he defecated through the sunroof of a rival’s car, unaware of the children sitting in the backseat, leading to a sex offender charge that has haunted him throughout his life. The sound of the whirring Bingo balls in the background throughout the scene elevates tension and brings us into Jimmy’s emotional state, and Bob Odenkirk’s delivery is flawless. Marco’s sudden death was shocking and emotional, a particular feat given Marco’s few appearances throughout the season.

But to jump to the birth of Saul at the end of the first season, and more specifically, through a series of events taking place over just one episode, seemed too heavy-handed. It’s like going on a road trip—being there will be great, but getting there is half the experience. And while I have no doubts that Vince Gilligan and Co. will continue to produce high-quality television for however long this show lasts, I feel a bit cheated out of that half of the road trip.