Home » An Expansion Of Visiting Views On University Campus 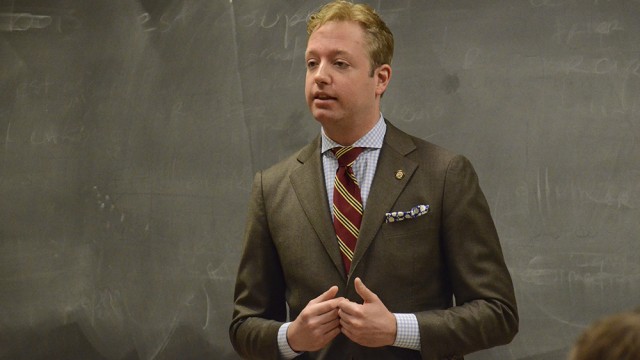 An Expansion Of Visiting Views On University Campus

Gregory T. Angelo, executive director of Log Cabin Republicans (LCR) and BC ’00, came to Boston College Wednesday to speak about the intersection of gay rights and conservative principles in an event sponsored by Boston College Republicans and the GLBTQ Leadership Council (GLC).

LCR is a group of activists within the Republican Party that advocates for gay and lesbian rights in the United States, while also staying aligned with the party’s other core principles. LCR was founded in 1977 in California to provide an outlet for Republicans who were unhappy with the Briggs Initiative, a piece of legislation that would prevent homosexuals from teaching in public schools and allow teachers who supported homoseexuality to be fired. In 2013, Angelo was named executive director of the group.

There has been a trend over the past few semesters of the University expanding the range of speakers brought to campus, perhaps most interestingly on topics of gender and sexual identity issues once completely barred from campus. Access to a broad spectrum of viewpoints is fundamental to the legitimacy of any university. With the advancement of dialogue on sexuality and gay marriage—brought on by campus visitors like Angelo and activist George Takei, as well as the Heritage Foundation’s Ryan T. Anderson—the University develops its breadth of speakers.

BC is a rare place that can attract world renowned speakers on issues of spirituality and philosophy, and while these conversations might initially seem more natural at a Jesuit university, the scope of a BC education needs to go beyond them.

Universities that only consider liberal ideologies are flawed in the same way to those who err conservative. While at a religious institution there will always be a certain tension involved with bringing speakers to campus that do not match neatly with a Catholic message, it makes for all the more interesting conversation.

A goal of any administration should be to prevent insulating its students from opposing viewpoints on controversial topics. BC should not be a “safe space” for students or administrators. At BC, some push-pull has proven inevitable when bringing speakers and events to campus, particularly in relation to questions of sexuality. And while it doesn’t always make for the easiest exchanges, “push-pull” is far preferable to an environment that allows all thought to be dragged in one direction.

gregory t. angelo
BC Ranked Fourth In Massachusetts For ‘Best Value’ By Data Analyst Group
BC Shows A Good Return On Investment With Room To Grow